In Case it’s Not Clear, Rates Are Going Up

“I have approximate answers and possible beliefs in different degrees of certainty about different things, but I’m not absolutely sure of anything.”

Fed chair Jay Powell did not say this at his press conference on Thursday. It is attributed to American physicist Richard Feynman. But had Powell uttered these words they would not have seemed out of place. Having overseen a largely avoidable spike in inflation by maintaining monetary accommodation for at least a year too long, the FOMC has turned their focus on its resolution. Thus are they laying the groundwork for their next mistake.

The revised dot plot projects a sharp increase in the Fed funds rate – in fact for now the FOMC is ahead of the market in their assessment of the rate cycle peak. The 2024-25 area of the futures curve is 0.50% lower than the latest Summary of Economic Projections (SEP). Fed policy can best be described not as managing a dual mandate that balances employment with price stability, but as attending to whichever of these two objectives is most out of line. Consequently, the warnings of hardship to come as the Fed drives up unemployment so as to soften wage growth and, in turn, inflation. 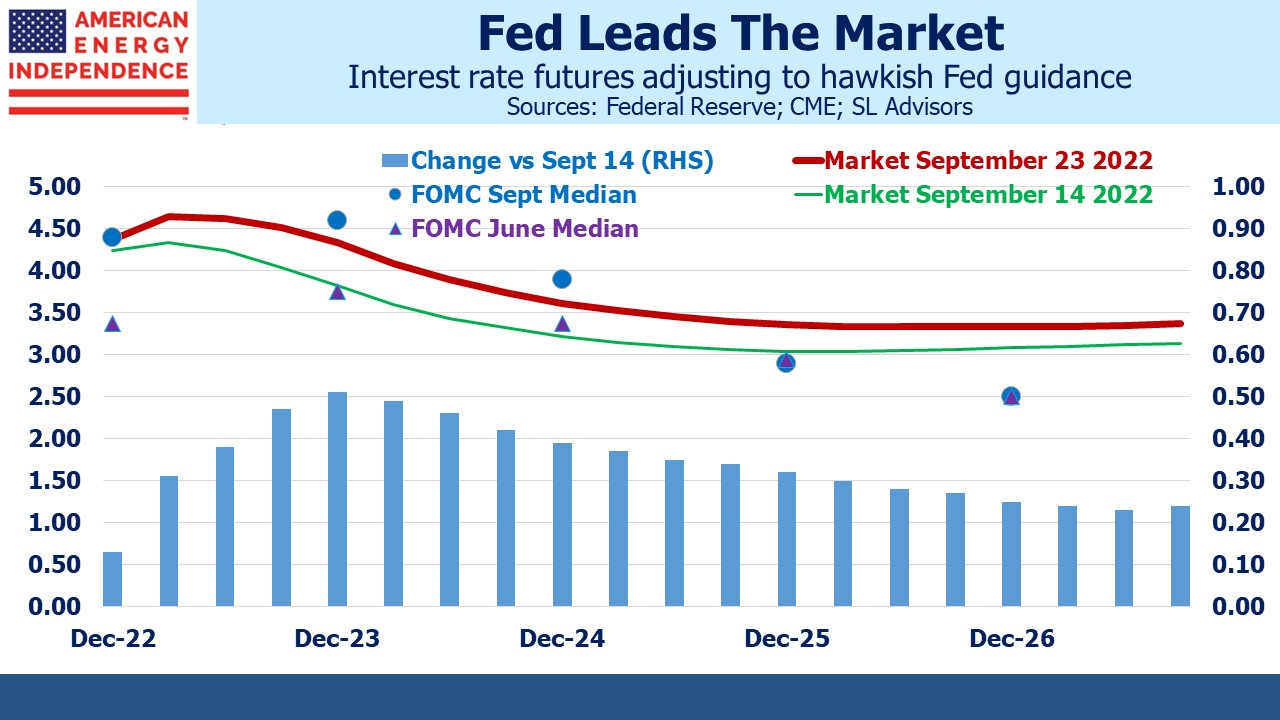 The SEP doesn’t portend much hardship. It projects unemployment averaging 4.4% in the fourth quarter of next year and 2024, so presumably peaking around that level. Before the pandemic many held full employment to be around 4.5%, so this hardly looks like a forecast of economic misery. PCE inflation, the Fed’s preferred measure and generally lower than CPI, is forecast to reach 2% by 2025.

Prior to the pandemic, the Fed emphasized full employment and tolerated a modest inflation overshoot. It seems reasonable to assume they’ll swing too far the other way now. Because inflation is the Fed’s focus, it’s likely unemployment will miss to the upside.

Fed critics are increasingly numerous and will become more vocal as rates rise. The actionable conclusion from this analysis is to bet that yields on 2024-25 short term interest rate futures will rise towards the blue dots. This FOMC wants to compensate for their inflation mistake by snuffing it out reasonably quickly. Their SEP says as much. The risk, as in most tightening cycles, is that they’ll overshoot and cause a recession. Achieving the benign combination of modestly rising unemployment with declining inflation remains an inordinately optimistic outcome.

Last Sunday we showed how the inflation stats rely on a lagging measure of home prices to calculate shelter inflation (see The Fed Is Misreading Housing Inflation). Owners’ Equivalent Rent (OER), is a survey that asks what homeowners believe they could rent their home for as a way to measure inflation in the cost of shelter, the service that a home provides. Shelter inflation was an important factor in the recent high CPI report. When asked, Chair Powell said, “I think that shelter inflation is going to remain high for some time. We’re looking for it to come down, but it’s not exactly clear when that will happen… So I think on shelter inflation you’ve just got to assume that it’s going to remain pretty high for a while.” Later he referred to the “red hot housing market” adding that, “we probably in the housing market have to go through a correction.”

This acknowledges the problem in using OER. It’s a non-cash item that lags the housing market but constitutes 31% of the CPI. The PCE deflator also uses OER but assigns a lower weight to shelter than does the CPI. It was interesting that Powell expects shelter inflation to remain high – it would seem an odd view to hold unless he’s also aware that OER lags the actual cost of housing.

There are increasing signs of softness in home prices, with rising mortgage rates being the culprit. Data from Zillow shows prices in San Francisco and Los Angeles both dropped 3.4% in the past month. Just as they missed the booming housing market because OER was slow to react, the Fed is likely to assess higher than actual inflation as OER lags on the way down. Mike Cembalest at JPMorgan recently wrote that “housing is imploding.”

I don’t think the Fed knows how to process information about house prices as it relates to inflation.

Another illuminating comment from Powell on the rate cycle was, “…you want to be at a place where real rates are positive across the entire yield curve.” Presumably a positive yield on ten year TIPs would suffice for the long end, but it’s unclear whether this means the Fed funds rate must be higher than current inflation, or simply above near-term inflation expectations.

At some point we’ll find out. For now monetary policy is being led by a group that, while not conceding one large policy error is nonetheless focused on avoiding a second one.