How Seaweed Can Fight Global Warming

A few weeks ago, my wife and I were fortunate enough to attend a wedding quite literally next door at our neighbors’ house. Freed from any concern about driving us both home safely, I was already in a mildly ebullient mood when I met Australian Stephen Turner. Now I may be promoting a stereotype and therefore betraying my absence of woke-ness, but I have yet to meet an Aussie who isn’t worth hanging out with over a couple of drinks. Call it positive profiling.

Upon meeting, we Brits comment on their lineage from 19th century convicts dispatched to Australia’s penal colony. They immediately remind us of Australia’s persistent cricket victories over England (“the Ashes”). We both chuckle at this predictable introduction and a thoroughly enjoyable evening follows.

Stephen Turner managed to make a discussion of seaweed interesting without in any way shaking my association of Aussies with conviviality. Steve is Chair of Sea Forest, an Australian start-up founded in 2018 that aims to use seaweed to combat global warming. Efforts to reduce Global Greenhouse Gases (GHGs) generally focus on CO2. 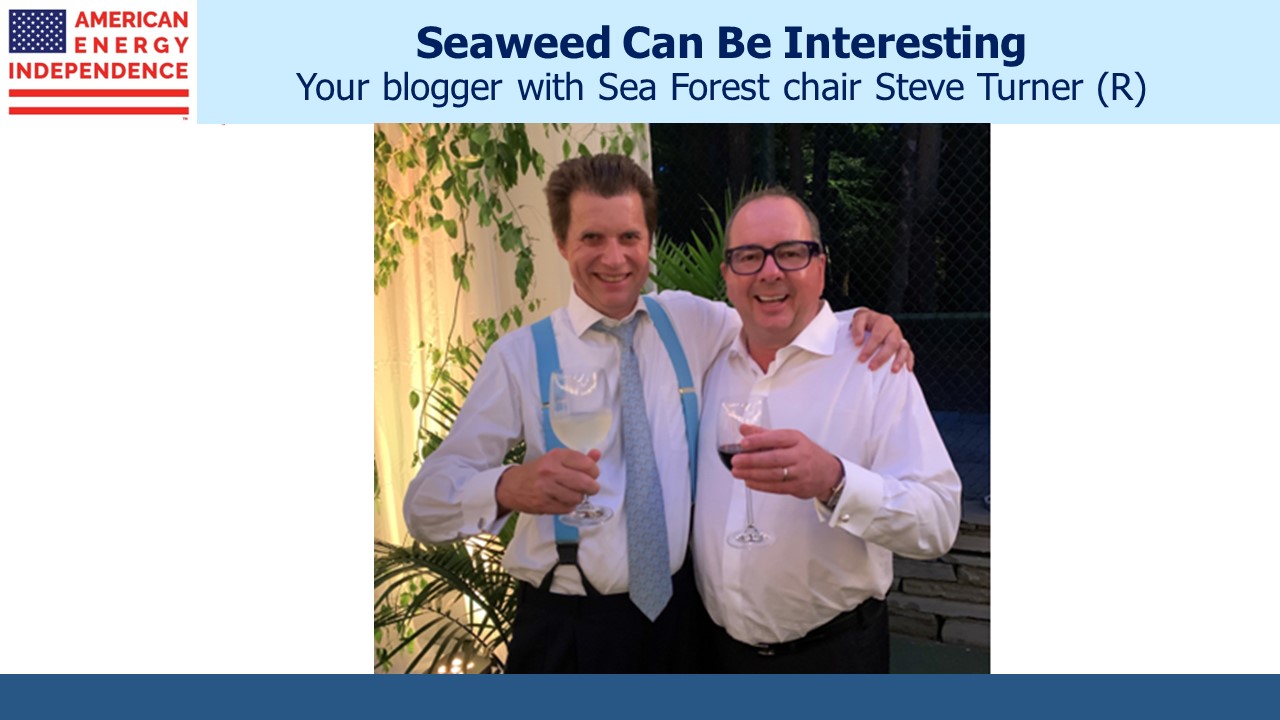 Solar power and windmills, electrification of the transportation sector, carbon capture and myriad other efforts are intended to reduce CO2 levels in the atmosphere. But methane (natural gas) is also a potent GHG. Per molecule, it is far more potent than CO2 over a few years, but over decades it decomposes. Scientists generally assume twenty year equivalency between the two, meaning they assume the potency of methane after two decades before converting it into CO2 equivalent.

Methane is around 11% of US GHG emissions, with CO2 the biggest at 79%. The main source of methane is from wetlands through the decay of organic waste, but it also comes from landfills and methane leaks in the handling of natural gas. The US Environmental Protection Agency estimates that over a quarter of US methane emissions come from enteric fermentation – that is to say from ruminants (mainly cows and sheep) burping and farting. The UN estimates that global livestock is responsible for 14.5% of all anthropogenic (human-based) GHG emissions.

In early 2019 we pondered the impact on GHG emissions of a worldwide phasing out of cattle – not slaughtering them but simply stopping their breeding (see The Bovine Green Dream).  We were prompted by material supporting Progressives’ “Green New Deal” which conceded that “…we aren’t sure that we’ll be able to fully get rid of farting cows…” within a decade.

Sea Forest is developing a more practical and humane solution. Asparagopsis is an edible red macroalgae, or seaweed. It is highly invasive and attaches itself to other forms of seaweed such as in the Mediterranean and other warm climates. Hawaiians eat it in fish salad. 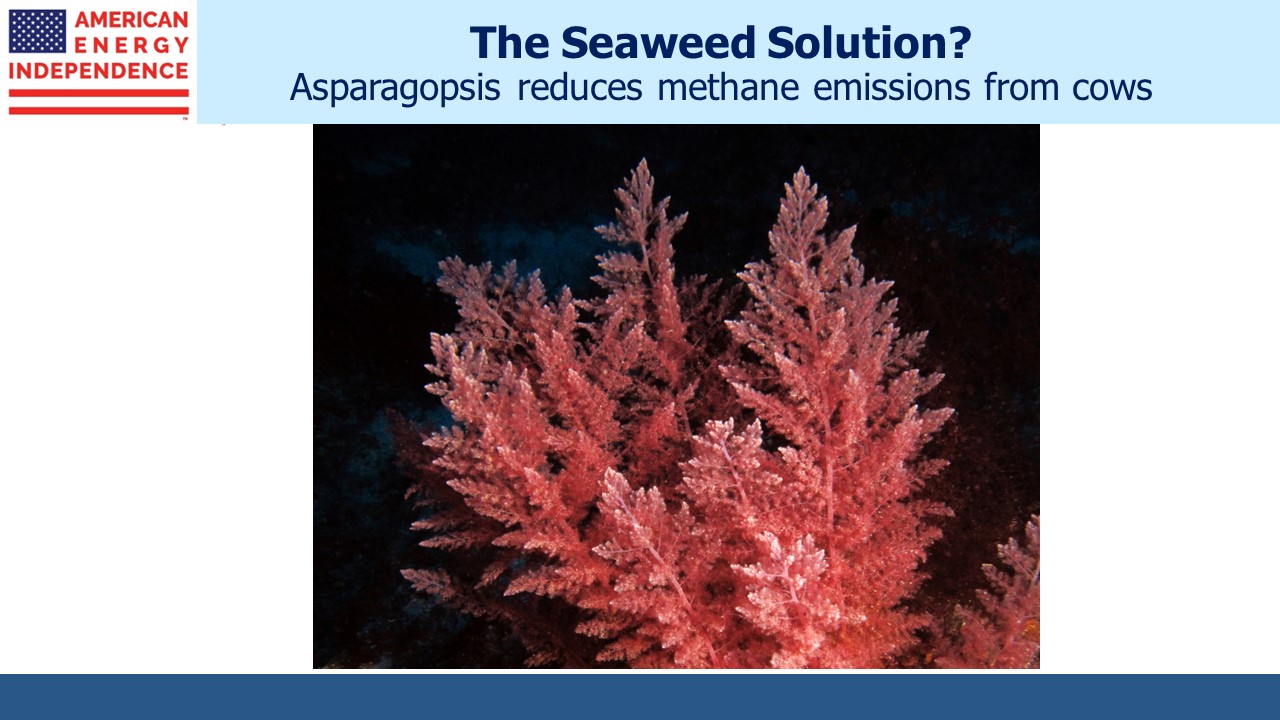 Asparagopsis is known to inhibit methane production in ruminants (mainly cattle and sheep). Sea Forest harvests it and produces a form (called SeaFeed) that can be given to farm animals as a feed supplement. It is native to the waters of Tasmania, where Sea Forest aims to cultivate it on a commercial scale. They have found that added in very low quantities (0.2%) it can reduce ruminant methane emissions by up to 98%.

As Sea Forest’s Steve Turner explained, “It works thanks to bioactive compounds that inhibit the enzymatic pathway producing methane at the last stage of ruminants’ digestion. When more energy is available to the animal, instead of being spent in the digestion process, it grows faster and the whole process is more efficient, e.g., less feed is needed.”

MJ Bale is an Australian menswear business that promotes its “carbon-neutral fashion brand” because the sheep whose wool the company turns into clothes have processed Asparagopsis added into their feed.

It’s easy to see how this could have broad appeal. Organic food already has a strong following. Many consumers pay more for smaller vegetables because they like to eat food that wasn’t produced using man-made chemicals.

Steve told me one of their challenges is convincing farmers that SeaFeed isn’t harmful to their very valuable herds and flocks. But assuming farmers can be convinced that SeaFeed won’t kill off their assets, “climate-friendly” beef and lamb could become popular. Sea Forest estimates that at commercial scale SeaFeed would cost roughly A$1 per cow per day.

For beef cattle, they calculate that 25% of the cost of SeaFeed would be offset by the GHG tax credit if farm animals qualified (assume A$50 per tonne). More efficient conversion of nutrition into energy means 20% fewer days in the feedlot. The nutrition benefit for dairy cattle is around 11%.

The result is an inconsequential 0.2% increase in the cost of beef. So the economics don’t sound insurmountable. They estimate the total addressable market worldwide at 1 billion cattle generating methane equivalent to 3 billion metric tonnes of CO2.

Although solar panels and windmills gain most of the attention when it comes to reducing GHGs, there is far more going on than simply increasing our dependence on unreliable, intermittent power generation.

Sea Forest is another example of an innovation that may change the world. They have received numerous awards and grants in recognition of their work so far. All of us have a stake (no pun intended) in their success.