On Monday Nord Stream 1 was shut down for annual maintenance, cutting off the remaining Russian natural gas exports to Germany. Europe’s biggest economy continues to provide lessons to the rest of us on what a flawed energy strategy looks like. German industry anxiously waits to see whether some contrived additional repairs will extend the pipeline’s maintenance beyond its scheduled ten days. Germany is dependent for energy on a country whose soldiers are being fired at by Ukrainians using German weapons. It’s not a good place from which to negotiate.

Austrian energy company OMV said it’s receiving less than a third of the natural gas from Russia that it’s ordered.

German day ahead power is trading at €370 per Megawatt Hour. French month ahead power is over €430. Europe’s problems are being compounded by a heatwave which is forcing reduced nuclear output in France. When the river water used to cool nuclear plants rises above a certain temperature, returning water back to the river risks damaging the environment. 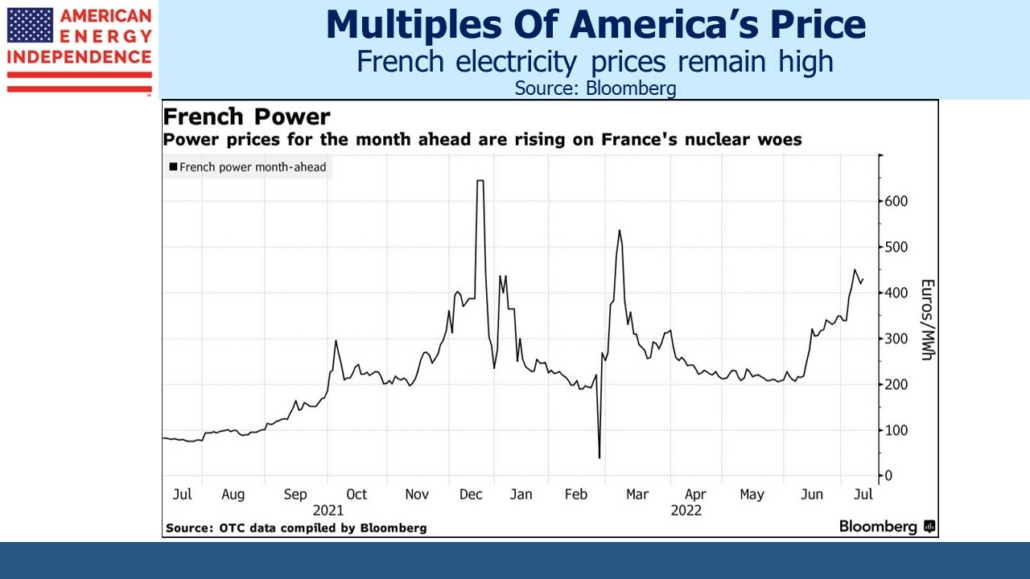 Right on cue, west European wind power is falling too. Hot weather tends to occur with little breeze. That’s why it’s hot. Texas is experiencing a similar drop in wind output during their current heatwave, with output running at only 8% of capacity. It is possible to want reduced CO2 emissions while valuing reliable energy over opportunistic solar and wind. Policymakers are increasingly embracing natural gas as the solution. 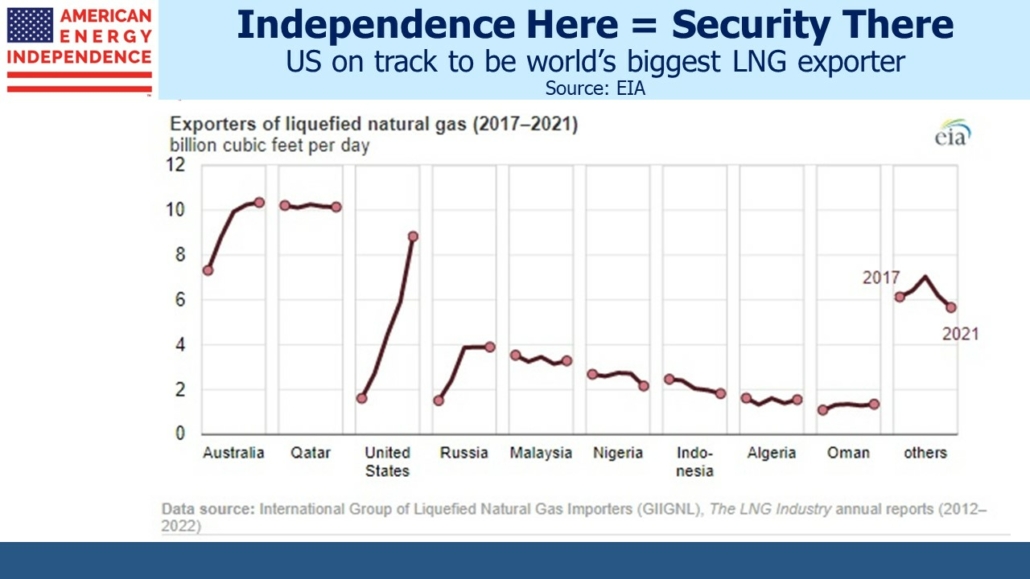 Global trade in Liquefied Natural Gas (LNG) rose 4.5% last year, a trend that’s likely to continue for some years now that Europe has pivoted away from Russian supplies. A recent profile of Tellurian CEO Charif Souki in the New York Times offered an unexpectedly balanced view of the benefits of natural gas. The article presented what is fast becoming orthodox thinking as policymakers confront the energy crisis:

EU lawmakers recently approved natural gas and nuclear as “green” investments, which will make it easier for companies to obtain financing. It’s another recognition that running the world on solar panels and windmills won’t work. Nonetheless substantial incongruity remains between what rich countries want for themselves versus their policy prescriptions for non-OECD countries. For example, Nigeria exports LNG to Europe who in turn wants to see Africa by-pass fossil fuels and use more renewables. It’s leading to accusations of “green colonialism”. Egypt is hosting COP27, the UN’s annual climate change conference, and increasing poorer nations’ access to natural gas is expected to be high on the agenda, as it should be. 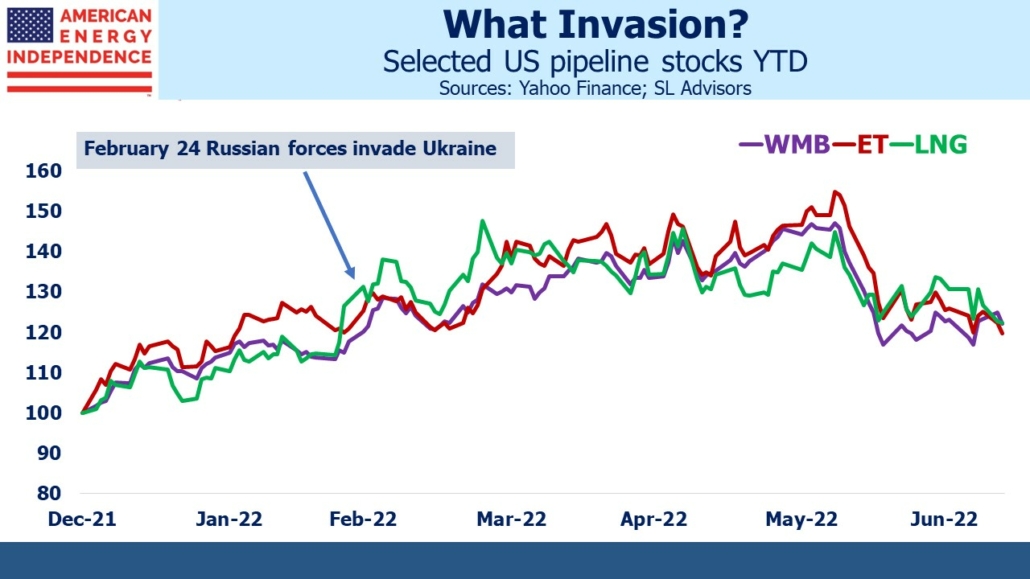 Further boosting domestic demand for natural gas is growing interest in Electric Vehicles (EVs), US sales of which recently crossed 5% of total auto sales. Tesla owners love their cars, but most own a conventional car too.  Inadequate charging infrastructure for EVs remains a deterrent, as does the time it takes to top up a battery. As EVs gain market share they will increase demand for electricity, the two biggest sources of which are natural gas (38%) and coal (regrettably 22%).

Recession fears continue to weigh on energy prices which is depressing the sector. The American Energy Independence Index has pulled back 19% from its recent high in early June but is still +12% YTD. The fundamentals have hardly changed. Natural gas demand remains strong over the near term and its long-term prospects seem to improve every month. Even if crude oil demand grows more slowly, it will have a minimal impact on North American pipelines.

Williams Companies has experienced an 18% pullback and yet their prospects have barely dimmed if at all. The stock yields over 5%, has a Free Cash Flow (FCF) yield of 7% and we calculate an adjusted funds from operations yield of 10%. A similarly bullish case could be made for Energy Transfer, which yields 8% and has a Distributable Cash Flow (DCF) yield of over 20%. Both companies spend no more than 10% of DCF on maintenance capex. Cheniere has a FCF yield of 17%.

Many prospective investors looked at this sector during the spring and hesitated because of the strong YTD performance. They asked whether they had already missed the move. Those same investors can invest at the prices that prevailed in February, before Russia invaded Ukraine. Back when European leaders sat atop Maslow’s pyramid with all their problems solved other than curbing CO2 emissions. A time when energy dependence on Russia passed for thoughtful engagement. A time when energy security was anachronistic. Better to watch the education from here than to live through it there.