Five years ago this month John Wiley published my first book.  The Hedge Fund Mirage; The Illusion of Big Money and Why It’s Too Good to Be True explained how hedge funds have in aggregate been a great business and a lousy investment. The opening sentence asserted that treasury bills would have been a better choice for the average hedge fund investor. This was a startling conclusion, since money had long been flowing to hedge funds in willful defiance of steadily worsening results. Surely, the flows were confirmation that the smart money was in hedge funds.

Hedge fund returns are conventionally presented from the perspective of a single investment at the beginning of the period. Such an approach is far from reflective of the experience of investors, since few were fortunate enough to invest in hedge funds in those early years. From 1998-2002 hedge fund investors enjoyed great returns; there just weren’t that many investors. A more meaningful analysis considers everyone’s returns. For this, you need to look at the asset weighted return, or IRR; the return on the average dollar invested rather than the first dollar. The difference is most stark when percentage returns (the left panel in the chart) are recalculated and shown as actual investment profits (the right panel). Viewed this way, hedge funds have delivered mediocre returns at great expense.  The high percentage returns of the early years didn’t generate much actual profit for investors, because the investors were few. They benefitted from exploiting many inefficiencies in financial markets without the burden of too much capital. 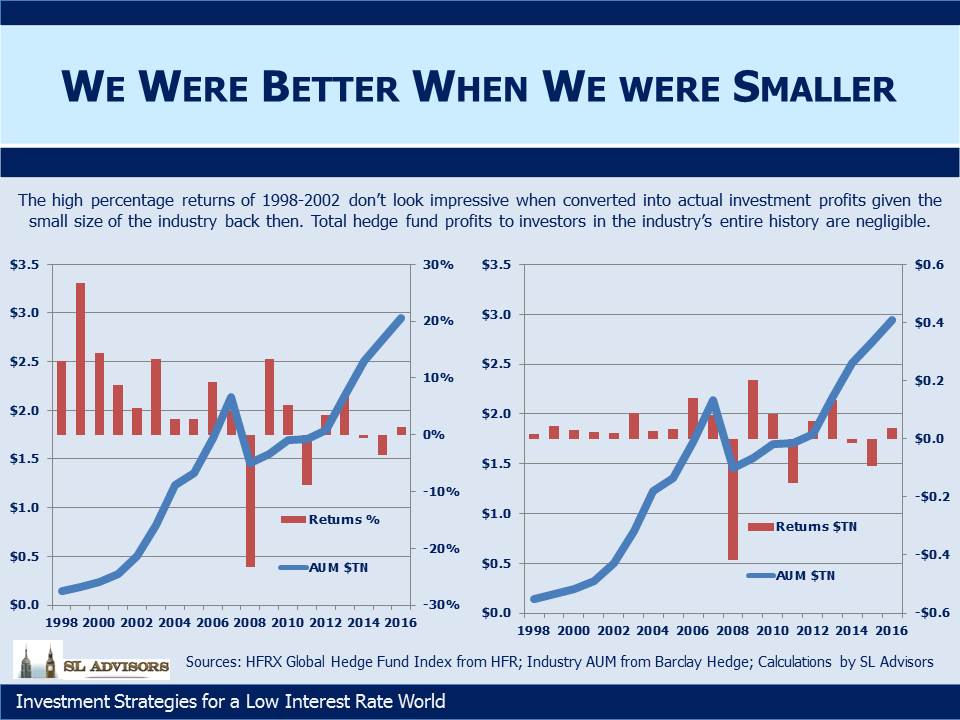 Substantial sums followed with the misplaced hope of achieving similar results. The book was aimed not at hedge fund managers but at the stewards of this misdirected capital; hedge fund managers are an intelligent bunch and scarcely needed any advice. The goal was to help the star-struck institutional investors challenge the guidance of their consultants, and avoid high fee strategies that too often enrich the managers but not the clients.

Five years is probably a fair period of time over which to assess the most important prediction made in the book, which was that hedge fund returns would be disappointing. This was a lonely view at the time – not as completely obvious as it should have been. The entire industry was being weighed down by the growing pool of assets it was managing. The availability of uncorrelated returns, which is what hedge funds try to provide, is finite; inevitably, dilution of returns followed.

Small hedge funds outperform big ones. Any big hedge fund did better when it was small (which is how it became big). These first two insights are generally accepted, and yet very few investors take the third logical step in this sequence of thoughts – a small hedge fund industry generated higher returns than a big one. Hedge funds were, and remain, over-capitalized.

Today, it’s not hard to find critics of the industry including some of its most successful practitioners. Assets are too plentiful and fees too high. This now passes for conventional wisdom although in 2011 that was certainly not the case.

A disappointing consequence of America’s increasing political polarization is the tendency of each side to assume the other is intellectually challenged. I try hard to guard against this tendency myself, but have to concede that on the subject of hedge funds I have failed. Which is to say, the hedge fund professionals who praised The Hedge Fund Mirage when it came out, merely confirmed the superior investing intellect that their businesses had already demonstrated. The critics (who generally aspired to invest money rather than actually doing so) similarly confirmed their place at the other end of this intellectual spectrum.

Hedge fund managers are by no means the villains in this story. Some of the smartest people around run hedge funds because that’s where the financial rewards are greatest. If every hedge fund manager sincerely believes their fund is the best, this is no different than individual business owners in any industry. Many managers have long recognized the challenges of asset size even while maintaining they could rise above the weight of mediocrity.

The fault lies with those who aggregate all those optimistic individual views into a positive one of the industry without considering the obvious negative consequences of too much money. Not every institutional investor has the ability to run a hedge fund. Some of the least sophisticated investors I’ve ever met are the trustees of public pension plans. They understandably rely heavily on consultants to guide them, not just for their expertise but also because as fiduciaries their decisions are subject to scrutiny under ERISA (the Employee Retirement Income Security Act).

Although critics of The Hedge Fund Mirage  were few in number, a couple are worth noting. The London-based Alternative Investment Management Association (AIMA), led at the time by Andrew Baker, abandoned any pretense of objectivity in their eagerness to defend the indefensible. They do represent hedge funds if not actually running one. An initial attempt at making the case for hedge funds was followed by a more lengthy but no more persuasive effort. One journalist famously noted that, “…the AIMA paper has convinced me of the deep truth of Lack’s book in a way that the book itself never could.”

Thomas Schneeweis, an academic and hedge fund consultant, descended from his ivory tower to criticize what he called “baby hedge fund analysis 101.” For the sake of investors everywhere, one must hope that his investment acumen surpasses his business building ability, ensuring few victims of any Schneeweis insight.

In short, the critics were dead wrong.

Perhaps the strongest criticism of The Hedge Fund Mirage is that inflows to hedge funds have continued when they shouldn’t have. The reason this has happened in spite of overwhelming evidence that disappointment will follow lies in some quirky accounting. Public pension funds (such as the $300BN California Public Employee Retirement System, or CalPERS) don’t use GAAP (Generally Accepted Accounting Principles) accounting like public companies. Under GASB (Governmental Accounting Standards Board), investing in riskier assets has the odd result of lowering the present value of your pension obligations. There’s no economic connection between the two, and the flawed underlying logic is slowly creating a massive problem. It’s why public pension funds are today’s biggest hedge fund investors, a folly that will ultimately saddle taxpayers with the bill for unfunded pensions to retired teachers, firefighters and policemen in many U.S. states. Returns will continue to come up short.

The hedge fund consultants sit between the expensive, poorly performing hedge fund industry and the unsophisticated trustees of many public pension funds. The consultants are smart enough to understand the consequences of GASB, and commercial enough to know how to exploit this knowledge by guiding their naïve clients towards complex investments whose sourcing generates further consulting fees. There is a special place in Investment Purgatory for those who ply such a trade. The poor bargain this represents is gradually being acknowledged, often by early adopters including CalPERS who concluded hedge funds were going to create more problems than they’d solve.

That attractive hedge fund returns are a mirage is slowly dawning on the not-so-sophisticated institutions whose portfolios include them. The industry remains over-capitalized. Few of today’s investors even think to consider what level of total hedge fund assets is consistent with their aspirational returns. Until they do, continued disappointment awaits.