Last week a friend called to wish me Happy Independence Day. He added “Down with the British” in recognition of my immigrant status. My accent betrays my British childhood, even though I moved here in 1982. July 4th barbecues usually provoke a few joking reminders about beating the British. The obvious response is that had the War of Independence instead been the defeat of the colonial uprising, there would have been little reason for me to emigrate from the UK some two centuries later.

It is typically American that the descendants of that war’s losing side are so readily welcomed, especially on the anniversary of its kick-off.

While the U.S. will fall short of its goal to give at least one dose of Covid vaccine to 70% of adults, we can still celebrate that life is almost back to normal. After a stuttering start, once America took on Covid we were going to win. America always wins. As Churchill once said, “You can always count on the Americans to do the right thing after they have tried everything else.”

The fact that international travel is virtually impossible is a reminder that while Covid may be over in this country, it remains a dominant feature of everyday life in many others. Much as I would have loved to travel to London and watch England beat Germany at Wembley last week, testing and self-quarantine requirements made it impractical.

The economic consequences of Covid are still with us. The Fed’s full-on monetary stimulus and bond buying are barely different from a year ago even though the economy has come roaring back. Friday’s payroll showed another 850K jobs added and the unemployment rate only edged up because more people are being drawn back into the workforce. 1.6 million people report the pandemic is preventing them from looking from work, down from 2.5 million a month ago. The question hardly needs asking any longer, and the end of Federal unemployment benefits will help.

OPEC fears a crude surplus by the end of 2022, which is complicating their discussions to continue phasing out the supply cuts they implemented in May of last year. They’re evidently not too concerned about high oil prices weakening demand. By contrast, the Fed remains at full throttle, providing ever more stimulus. 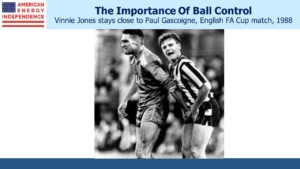 Finally, for those enjoying the Euro 2020 football tournament, the photo reminds that the game doesn’t only produce moments of brilliance.