A Futurist's Vision of Energy

Recently a client drew our attention to a presentation by Stanford University Futurist Tony Seba. He has made a splash with his predictions of imminent, dramatic changes in the transportation industry. In less than a generation he expects a world of self-driving (i.e. autonomous), electric vehicles (EVs) supported by a heavily solar/wind-powered electric grid. In June he gave this presentation which you might find interesting.

Tony Seba is an engaging presenter. Moreover, the future of U.S. energy infrastructure will be impacted both by the increasing use of renewables for electricity generation as well as the growth in EVs (renewables and EVs are separate topics, albeit linked). In discussions with investors both of these topics regularly come up. There’s the near-term impact on the sector of growing production driven by the Shale Revolution. Farther out, the growth in renewables (mainly solar and wind) combined with dramatic improvements in battery technology, could represent an existential threat to segments of the U.S. oil industry.

We read and think about these issues a lot. Behavioral economists teach that humans tend to make overconfident forecasts, whether it’s of equity returns, jellybeans in a jar, or the impact of new technology. Precise forecasts exude confidence and draw attention. A date when EVs will predominate is more eye-catching than a range of dates within which such change is more likely than not. Nonetheless, precision in such matters is usually wrong, and we are not with Tony Seba at the extreme end of predictions; the future is rarely so certain. He makes some specific forecasts, including that crude oil demand will peak in 2020-21, after which it will fall 30% by 2030. He also forecasts that by 2030, 100% of new mass-market vehicles bought in the U.S. will be autonomous EVs.

Exxon Mobil (XOM) recently published Outlook for Energy: Journey to 2040, their regularly updated long-term energy forecast. They have an institutional bias towards fossil fuels so they’re never going to line up with a futurist. Nonetheless, forecasting energy use is critical to their long term survival. Seba includes a reference to Eastman Kodak, a company which invented digital photography and was then destroyed by it. XOM will be aware of that example of disruptive technology.

The Outlook for Energy makes forecasts too, beginning with growth in global GDP and population. They forecast 1.8 billion cars, trucks and SUVs on the roads in 2040 (versus 1 billion today) as rising living standards in developing countries drive demand. While expecting impressive percentage growth rates in wind and solar, they expect oil and natural gas to increase their share of the world’s energy needs. Overall, they see fossil fuels slipping modestly, from above 80% to just under 80%, with both coal and oil losing market share to natural gas. They expect crude oil consumption to be around 17% higher in 2040 than it is today. By 2040 they expect 15% of new car sales globally to be hybrids, and 10% of U.S. car sales to be EVs.

One of these will be spectacularly wrong.

Although they’re both point forecasts and so unlikely to be precisely right, we think it’s more likely Seba will miss by a lot. His presentation opens with an old photo of New York’s Fifth Avenue in 1900 full of horse-drawn vehicles, and moves to 1912, same place, with all automobiles. It’s true that some new technologies have been highly disruptive, but it doesn’t follow that they all are. Seba’s analogy to the car is intended to validate his EV/solar forecast, although he wasn’t around in 1900 to predict the former.

Growth rates can quickly lead to exponential change when projected out a decade or more. Yet change more often follows an “S” curve, with a high growth rate during widespread adoption followed by slower growth thereafter. We think it’s unlikely the electric grid could adapt so quickly to transmitting the substantially increased electricity required to run a national EV fleet. We also note Seba’s assuming no new advances in the technology of the internal combustion engine, whereas there are continual improvements here too. And the Shale Revolution itself is a form of disruptive technology. We think natural gas is the most likely winner, as it’s the cleanest fossil fuel and enables increased use of renewables by providing baseload electricity for when it’s not sunny or windy.

The price advantage Seba forecasts for solar assumes that the recent substantial productivity improvements in shale drilling don’t continue at all. In fact, he assumes that all the losers, which includes automakers, utilities, oil and gas producing companies, refineries and all those invested in life today as we know it, will stand by passively while their business models are disrupted by new technology. In fact, they are and will continue to respond, by improving their own technology. Furthermore, until battery storage technology and cost improve substantially, we still need backup power for intermediate solar power.  This provides demand for of fossil fuel baseload capacity, which often comes from natural gas “peaker” plants (i.e that run only during times of high demand). It’s hard to see a widespread transition to renewables without increased natural gas usage..

An 80% drop in car ownership by 2030 (another Seba forecast) implies widespread car-sharing. Using an Uber-type app to summon an autonomous EV when you need it suggests acceptance of a generic car. What if you need a babyseat? Extra room for luggage? A big family? We think car demand will remain more heterogenous than Seba suggests. Other non-technology hurdles include issues of liability — if your autonomous EV causes an accident, who’s at fault? What if a software bug causes multiple, simultaneous collisions? The deep-pocketed corporations developing the technology will need protection from class action lawyers before it is allowed to go mainstream.

Directionally, Seba’s probably right in that we’re eventually moving to EVs. But investing requires timing too. Seba’s most extreme, widely known forecasts could miss and yet still gain plaudits for getting the direction right, in the same way an equity analyst might gain followers with the highest target price for a hot stock even if it never gets there. But as investors, we care about pace of change as well as direction. Vaclav Smil, a thoughtful and prolific writer about many topics including energy, articulated the major impediments confronting widespread, rapid adoption of renewables. This brief essay, albeit nearly four years old, is still relevant.

The left chart in the panel below looks complicated, but it shows the proportion of primary energy delivered by each source going back two centuries, on a semi-log scale. The point is that growth slows sooner than expected, and the notes underneath highlight that fossil fuels in aggregate stopped gaining market share in the 1970s, which is probably not intuitive to most people. The chart is from Energy Transitions: Global and National Perspectives, 2nd edition (2016) by Vaclav Smil. The chart on the right shows sales of hybrids and the sensational early growth that fizzled out. Had Tony Seba been giving his presentation in 2005, he probably would have had a chart projecting a car market dominated by hybrids and leaping from its then current 1.4% market share, whereas a decade later it was at 2.0%. 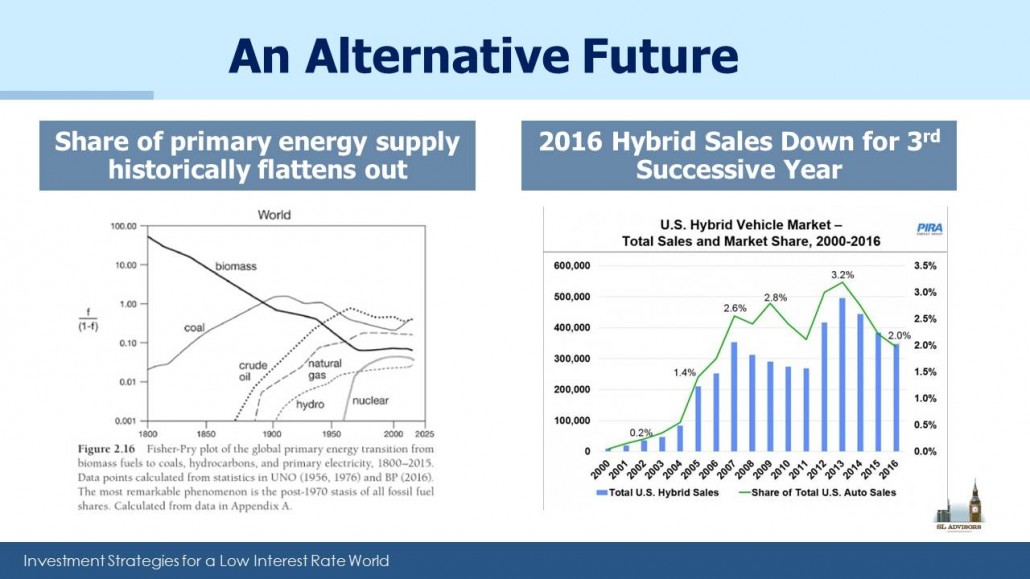 And yet, it really is an exciting future. Personally I can’t wait for autonomous vehicles. I’m sure I’ll own one myself once the technology is proven (I am known by my friends as a late adopter of new things). Being driven by software so the passenger can read, send a text message or even sleep will surely be a great improvement in safety. When I’m finally in my autonomous EV and not driving I’m sure it’ll be better for those around me. Although  Seba doesn’t highlight this, one of the strongest arguments in favor of autonomous vehicles is that the software will operate them more safely than unpredictable, sometimes impaired humans. Automobiles kill nearly 1.3 million people globally every year and an additional 20-50 million people are injured or disabled. In this arena like so many others, technology will eventually make the world a better place.

We watch these and other developments carefully. We acknowledge the danger of holding any view with excessive confidence, and new information can cause a reassessment.  The further out one goes the harder it is to be certain about oil demand and its price. Growth in wind, solar and other future energy technologies should be taken seriously and must already be a consideration for any big, conventional oil and gas project with a projected return over decades. The optimistic case for renewables highlights the incredible advantage of the Shale Revolution, where development costs are low, production quick, and investments recouped in months. This compares favorably with conventional projects (respectively, high, slow and over many years).  For now, we believe Tony Seba’s vision is farther off than he thinks, but what a fascinating journey we will be taking with American innovation revolutionizing the global energy markets from both sides.