Alex Epstein’s 100K Twitter followers have anticipated for months the publication of Fossil Future – Why Global Human Flourishing Requires More Oil, Coal, and Natural Gas – Not Less. Few authors have promoted a book more relentlessly. I awaited its publication eagerly. It is the follow up to Epstein’s 2014 book, The Moral Case for Fossil Fuels.

Epstein’s chief insight, articulated in his first book, is that the standard by which fossil fuels should be judged is whether they promote “human flourishing.” He constructs an intellectual framework based on Utilitarianism that seeks the maximum benefit for the greatest number. If his first book built a moral case defending fossil fuels, his new one unapologetically celebrates their enormous positive impact on humans all over the world.

Epstein takes the offensive against environmentalists such as Bill McKibben, the Sierra Club, and other opponents of progress (“anti-humanists”) whose philosophy logically leads to lower living standards, pain, suffering and death for millions of people around the world. 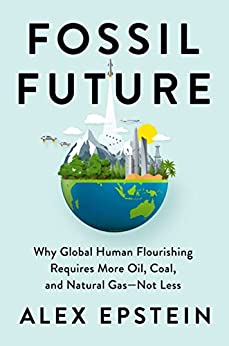 When I read The Moral Case in 2017 (see review here) I found Epstein’s defense highly compelling. The strength of Utilitarianism is that it’s hard to argue against it. Maximizing benefit for the greatest number is the ethos of any civilization – when moderated to avoid imposing undue hardship on minority groups it is the most ethical set of rules to live by. Epstein is a philosopher not a scientist, so presses his case in these terms supported by familiar statistics.

Global CO2 emissions have risen in the last century along with the human population, life expectancy and living standards. It is axiomatic that the combustion of coal, oil and gas has made this possible. Western living standards would otherwise be unrecognizable. In emerging countries cheap energy provides basic needs to ever more people. Hundreds of millions have climbed up Maslow’s Hierarchy of Needs, able to access and move beyond the basic necessities of food, water, shelter and security.

Therefore, the moral case for fossil fuels is fundamentally about allowing non-OECD countries to improve their standard of living, education, health outcomes and longevity. Rich world energy consumption is roughly flat over the past decade. Even if we engineered a draconian reduction in CO2 emissions we wouldn’t offset the increases coming from China, India and others.

Ethically there’s no case for the US, EU and other rich countries to seek lower emissions from emerging economies. Practically speaking, these countries are in any event choosing growth and offering climate pledges barely sufficient to placate. Without foreign aid on a scale never given before, CO2 emissions will rise. Net Zero is an impossible goal.

Cheap (ie fossil fuel) energy aids farming through the use of equipment and irrigation. More efficient farming frees workers to produce other goods and services. Greater specialization further raises incomes, allowing the next generation to spend more time in school.

Construction equipment allows people to move from hand-built mud huts to more permanent, secure structures, leaving them safer. By replacing wood and dung, the choice of fuel for the poorest, coal oil and gas improve indoor air quality for millions of people.

Hospitals benefit from reliable electricity, better able to support a premature baby in an incubator and provide myriad other services that keep people alive.

In western countries energy consumption is stable, and we’re no longer experiencing dramatic benefits from increasing its use.

In England in the 1800s, the average family spent 80% of its income on food. On the American frontier, the typical household burned 350 pounds of wood every day to keep warm and cook. OECD countries began their energy-related great improvement in quality of life in around 1850, the start of the industrial revolution and the benchmark against which today’s global temperature is compared.

Vaclav Smil, a multi-discipliniary scientist and prolific author, recently published How the World Really Works: The Science Behind How We Got Here and Where We’re Going. Smil estimates that coal provided half of England’s household heating as early as 1620, way ahead of the rest of the world which he estimates was still 98% reliant on plant fuels (ie firewood) for heat and light in 1800. By 1900 half the world’s primary energy came from fossil fuels (mostly coal, some crude oil).

Epstein is no climate denier. He simply argues that any evaluation of fossil fuels needs to consider the enormous benefits and not just the costs. China, India and other non-OECD countries are understandably pursuing what the west already has. And they’re consuming lots more energy in the process.

Media reports of increased extreme weather omit that weather-related deaths have fallen 99% in the last hundred years. Structures are more secure, and satellite-aided weather forecasts warn of approaching hurricanes. In fact, global computing and communications consumes the equivalent of 3 billion barrels of oil per year, more than global aviation.

As regular readers of this blog know, we long ago concluded that intermittent solar and wind will never be able to replace traditional energy. Places like Germany and California that rely more heavily on sun and wind power have much higher electricity prices. Fossil fuels still provide 84% of the world’s primary energy, down from 86% in 2000.

The most strident opponents of today’s energy mix deserve the anti-humanist label Epstein gives them. They have no answer to the moral question of why poorer countries shouldn’t strive to improve their lives. McKibben, the Sierra Club and US Climate Czar John Kerry sit at the top of Maslow’s Pyramid, with all their needs solved.

Epstein coins some memorable phrases. We’re taught that impacting nature is immoral, whereas fossil fuels have allowed us to make an environmentally hostile planet habitable, via robust homes, heat and clothing. As a result, humans have perfected “climate mastery.”

Epstein regards climate extremists such a McKibben as promoting “a murderous anti-impact framework.” Their policies would consign millions to misery and death.

The IPCC’s recommendations to prevent a 1.5 degrees C temperature increase from 1850 by 2050 are really aimed at preventing a 0.4 degree increase from now, because we’ve already experienced 1.1 degrees. Epstein believes the risks from climate change are manageable, and we should deal with them as they present themselves. He cites the inaccuracy of past projections as a basis for this.

Here’s where we differ. The science is better today. Climate is complicated to model, but the uncertainty includes possible downside scenarios. Prudent risk management requires that we take steps to reduce CO2 emissions. His explanation for why the overwhelming scientific consensus recommends CO2 reductions rests weakly on the need of scientists to obtain research grants and a bias by funding organizations to promote a consensus view.

But we agree that prevailing wisdom places unreasonable confidence on forecasts of climate catastrophe, without allowance for high degrees of uncertanty and humankinds’ history of climate adaptation.

Phasing out coal in favor of natural gas and increasing our use of nuclear power are both powerful options staunchly opposed by climate extremists. Solar and wind can be part of the solution, but their embrace by purists as the complete answer is sidelining pragmatic choices like natural gas.

The continued growth of emissions by most non-OECD countries shows that, while most are taking steps towards IPCC goals, Zero by Fifty is highly unlikely. China, India and others long ago embraced Epstein’s philosophy. For them it’s the rational approach.

Today’s energy has made today possible. We shouldn’t be apologizing for that. And natural gas can be the world’s biggest source of reduced emissions, by displacing coal, as it has in America.