Recent earnings reports suggest some moderation in the acceleration of U.S. shale drilling. The CEO of Schlumberger said that equity investors were propagating marginal activity by providing capital based on volumes rather than returns. The retiring Chairman of Halliburton, Dave Lesar, provided some wonderful quotes on his final investor call, including this assessment of the Shale Revolution:

“They are your classic American entrepreneurs, and their success should be recognized. In Silicon Valley, such a success would be greatly celebrated as another industry disruptor. The unconventional disruption is not widely celebrated beyond the energy space, but it should be. The development of US unconventional resources has been as disruptive to the global energy market as Amazon has been to Big Box Retailing or Uber to the taxi business… Made the US more energy independent, caused OPEC to react and changed the fundamental economics of offshore production.”

This is one of the reasons why America is Great.

Anadarko announced a $300MM (7%) reduction in their 2017 capex plan, noting that margins were too volatile to support their previously planned budget (some of this reduction was to non-shale, offshore projects). Halliburton’s Dave Lesar also noted a “tapping the brakes”, which the incoming CEO Jeff Miller clarified as, “going from 80 miles an hour to 70 miles an hour.” Other U.S. drillers including Hess and Sanchez similarly lowered capex. The anecdotal evidence of slower production growth supported crude prices last week, as did OPEC’s meeting in St. Petersburg at which Saudi Arabia pledged to unilaterally limit exports in a further effort to support prices.

The U.S. Energy Information Agency (EIA) publishes a monthly Drilling Productivity Report (DPR). It includes data on output and productivity from the larger shale plays across the country. Many observers including ourselves have commented on the dramatic improvements in productivity that have been taking place. It’s no exaggeration to say that advances in drilling techniques and use of improved technologies have been hugely important drivers behind the rise in U.S. production, in spite of falling prices.

However, part of the productivity improvements have been due to an increased focus on the most productive wells. U.S. producers adopted a defensive posture in 2015-16 as crude prices collapsed, and that included focusing their efforts on their best plays. Although there’s no doubt that actual productivity improved enormously, the figures are likely somewhat flattered by this focus on the best assets. 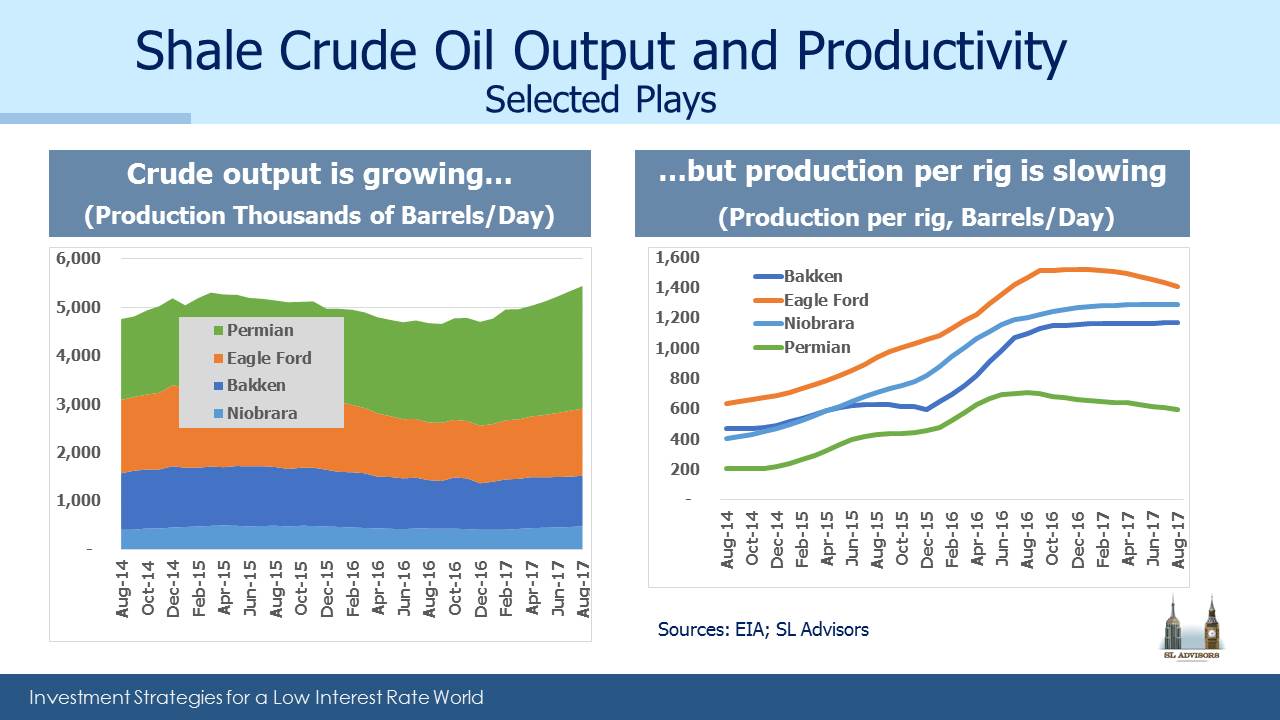 One measure of productivity is initial output per well (Initial Production Rate, or IPR), and in some plays (notably including the Permian), this statistic has been declining modestly for about a year. It’s still higher than at any time prior to 2016, and enhancements such as multi-well pad drilling, longer laterals and new fracking techniques have been critical to success. Output continues to grow even while initial production rates are flattening out. It’s a consequence of drillers moving beyond their most productive plays, best rigs and most skilled crews. While they played defense successfully, operating efficiencies were achieved and are being applied more broadly. Although crude oil production from shale plays is likely to keep growing in the current economic environment, the flattening of IPRs is a sign of limits on unconstrained growth. A study from MIT concluded that productivity gains were being overstated by insufficiently considering “sweet-spotting”, the tendency to focus on the best acreage.

Recent earnings reports as well as the IPR data noted above suggest that, while U.S. output will continue to grow, there are visible limits on that growth. Furthermore, after seeing annual declines in breakeven prices of 20% in 2015 and 29% in 2016, Rystad Energy forecasts breakevens are poised to rise 7% in 2017. Nonetheless, productivity remains high enough and costs low enough to gain market share, but perhaps not enough to further depress prices.