In Fed chair Jay Powell’s testimony yesterday during his renomination hearing before the Senate Banking Committee, he stuck to his familiar narrative of blaming inflation primarily on supply bottlenecks. We think excessive fiscal and monetary stimulus are more important reasons. One of the more persuasive charts is of Personal Consumption Expenditures (PCE). The Fed likes to use the PCE deflator to measure inflation, because unlike CPI its weights adjust to incorporate substitution (i.e., apples for pears if relative prices move).

Consumer spending is running well ahead of its ten year trendline – currently 7% above, equal to an extra $1TN. It’s 10% above it’s pre-Covid level. This would seem to be a more plausible explanation for inflation than supply bottlenecks. Fiscal and monetary policy are the cause. It still beggars belief that the Fed continues to buy bonds and maintain near-zero interest rates, providing ongoing stimulus that the economy no longer needs. 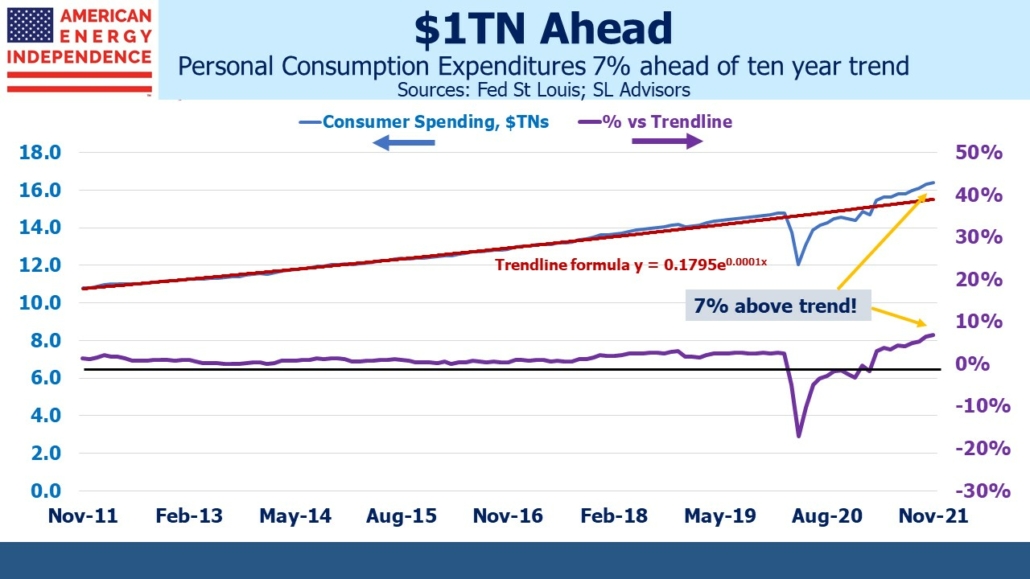 Senator Pat Toomey (R-PA), the ranking Republican on the Committee, asked if it was realistic to expect the Fed to succeed in curbing inflation without bringing short term rates at least up to the level of inflation itself. Prior to entering politics, Toomey traded derivatives at Merrill Lynch and in the 1980s he and I once ate dinner together in New York with several other markets people. He understands finance better than most politicians, and this was a good question.

Powell responded that they expect supply bottlenecks to ease, but that the Fed was ready to do more if required. Their slothful normalization of policy reflects a degree of hope that supply constraints will recede, and inflation fall, without them having to do much.

Toomey’s question was salient, because the FOMC’s projections are for the Fed Funds rate to reach 2.5% in about five years’ time, presumably long after inflation has been vanquished. The eurodollar futures market is even more optimistic, priced for short term rates to stall out at around 2% within three years. Both are consistent with the supply constraints explanation for inflation. If it turns out that the $1TN in extra spending power available to consumers is more important, a change in expectations will be warranted. 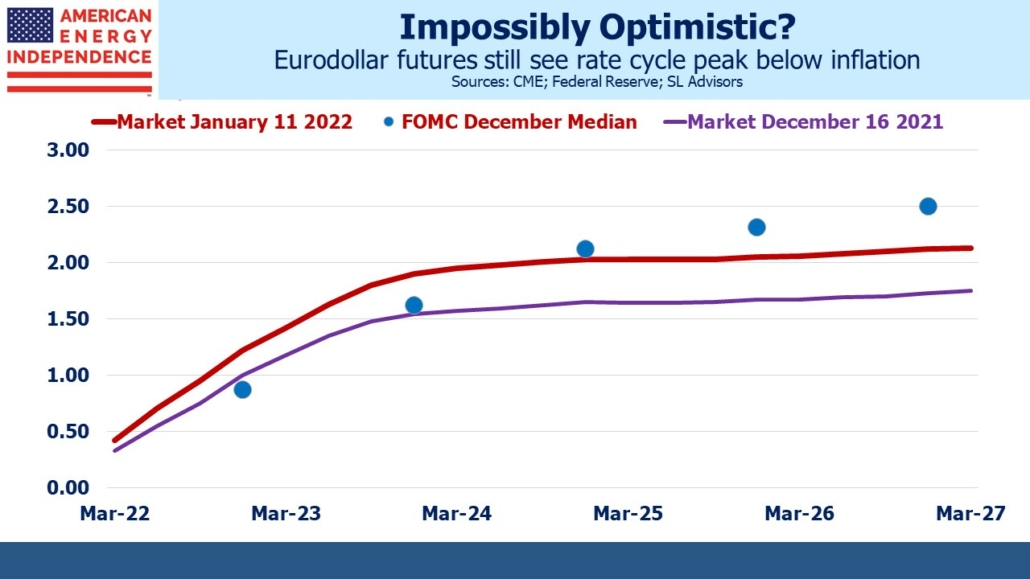 Bond yields have provided support for stocks for many years. Low long term yields continue to defy logic. Former Fed vice chair Alan Blinder was on CNBC yesterday morning, and like many observers he remains puzzled by this. Return-insensitive investors with substantial assets indiscriminately buying sovereign debt is our best guess. While it’s foolhardy to assume bond yields will rise significantly, it’s a risk worth pondering as the Fed finally starts normalizing policy.

Attention recently has focused on the Fed’s $8.8TN balance sheet. In response to a question, Powell said, “We will reduce the balance sheet sooner and faster than last time.” FOMC minutes from December fueled concern about how this might take place. The minutes noted that the balance sheet, “… was much larger, both in dollar terms and relative to nominal gross domestic product (GDP), than it was at the end of the third largescale asset purchase program in late 2014.”

If the Fed sits on its hands, $1.1TN in US treasuries will mature within the next year. More intriguing is whether the Fed concludes long term yields need to rise in order to slow inflation. They have $3.9TN with maturities longer than ten years, $2.6TN of which is Mortgage-Backed Securities (MBS). Total 2021 MBS issuance was $4.2TN, so the Fed is a big player here. Their balance sheet was growing at a $1.4TN annual rate until the recent taper announcement. If they ever decide to shrink it at the same pace, the Fed would have to start auctioning off some of its holdings. 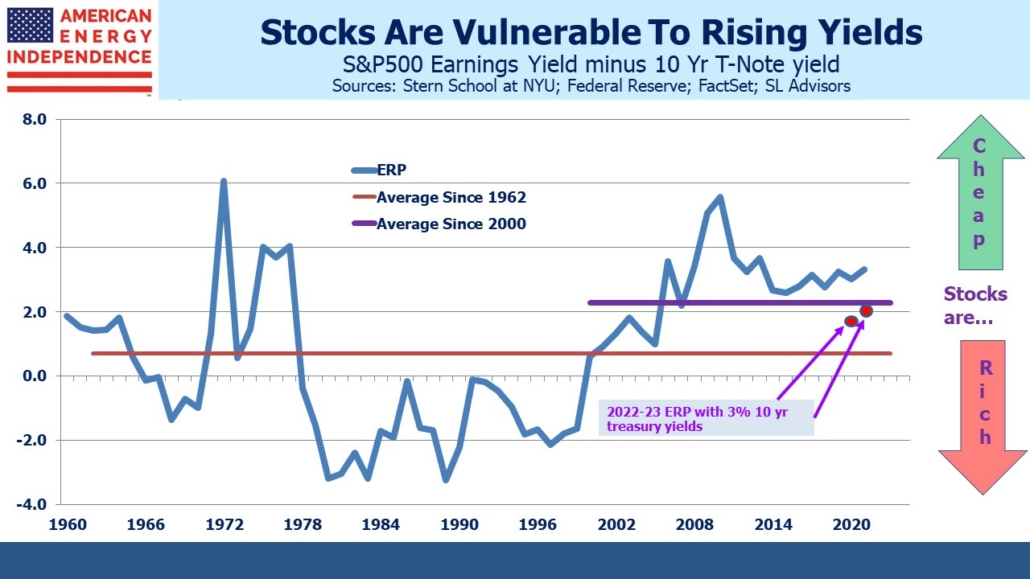 For equity investors it’s worth considering what a 3% yield on the ten year treasury might mean. The Equity Risk Premium (ERP) would no longer show stocks to be cheap, at least compared with valuations over the past decade.

Energy continues to perform well, and yet pipeline stocks remain mispriced relative to their bonds. Several investment grade issuers offer dividend and free cash flow yields substantially higher than their long term bonds. A buyer of debt maturing in three decades by definition holds a constructive view on the equity.

Midstream infrastructure bond yields reflect equanimity if not optimism over the long term prospects for the issuers. By contrast, equity valuations continue to suggest concern about the security of payouts, overlooking the increasing prevalence of dividend hikes and stock buybacks. The apparent disconnect between equity and debt pricing remains a puzzle.

Stocks are vulnerable to a sharp jump in bond yields.  However, pipeline stocks offer much better valuations as well as protection against inflation if it persists at a higher level than many expect.