Facebook’s (FB) business model should be well understood as extracting value from the enormous amount of data users provide about themselves. Relationships and “Likes” disclose much about an individual’s affinities. Moreover, when a FB user clicks on an ad or even just hovers her cursor over it, FB knows. This knowledge is exceptionally valuable to advertisers, since a great deal of advertising has historically relied on reaching a group you think could be interested without knowing who reacted. The oft-quoted saying that companies know half their advertising budget is wasted, just not which half, shows there’s plenty of room for improvement.

It’s a powerful proposition, and relies on users sharing all kinds of personal details in exchange for freely sharing holiday photos, or which restaurant they’re currently at “enjoying adult beverages.” But as the latest furor over Cambridge Analytica shows, FB doesn’t protect all this data as well as they might, or at least not as well as regulators might like. In some ways it betrays an arrogant culture – since users provide the data about themselves for free, they must not value it very highly. Nonetheless, FB is now Villain #1. Congressional hearings will surely follow, and perhaps even some constraints on the commercialization of free user data into a lucrative advertising platform. 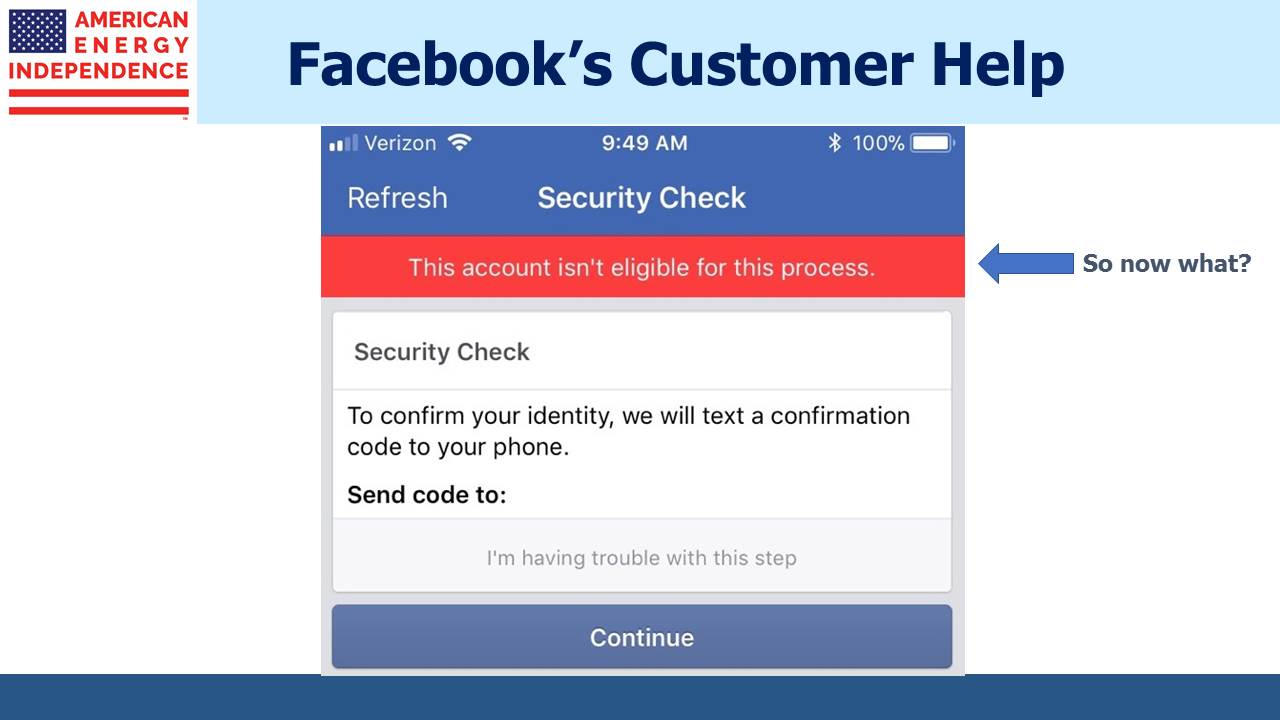 We had our own experience of FB’s culture as a small advertiser. Last year we launched the American Energy Independence Index, along with an ETF that seeks to track its performance. We were intrigued at what we heard about FB’s precise marketing, which appeared to provide us with the opportunity for targeted ads at FB users whose profile suggested they’d be interested. You’d only pay for users who clicked on the ad. Furthermore, FB’s software would refine our targeted audience based on analyzing the results. So we tried it out.

Advertising of securities including ETFs is highly regulated. Such ads on FB are rare, so we knew we were on relatively new territory. But there is clear evidence that investing is moving farther online, with robo-advisers now offering algorithm-based advice to the next generation of investors. Any ad had to be fully compliant with all the applicable regulations, and unfortunately FB doesn’t allow you to design a mock-up of your ad for internal review. So the FB page was briefly posted and taken down a couple of times as we ensured it was compliant. Product endorsements are also forbidden, so out of an abundance of caution we sought no FB “friends”, to avoid any unwanted “Likes”.

The result was, we looked nothing like a typical FB user. No friends, no interaction with other users, and a page that had been posted for a couple of seconds at a time.

FB is on the lookout for Russians. Or more accurately, internet trolls and other “bots” with nefarious objectives such as influencing our election. Naturally, FB has designed software to screen for suspicious activity, and we met the algorithm’s criteria. Our account was suspended. But the ad, which was compliant with the regulations even if FB was suspicious of the user, continued.

Our corporate credit card was duly billed for activity even while our account was suspended.

And here’s the point. You cannot contact Facebook. There is no number for a customer to call if there’s a problem. Nowhere at all. There’s nobody to e-mail. You can submit an enquiry on a website, and you’ll receive an automated response. We do investment research, which is largely online, so we are not exactly neophytes at finding information on the web. And it became abundantly clear that FB’s advertising business model is designed to avoid the expense of human interaction. I even reached out to someone who works in their Advertising department. We’d played golf last Summer and he’d left me impressed with how their deep knowledge of users could benefit their advertising customers.  Surely, a golf acquaintance could help. He responded with a URL that led to another automated response.

This is why FB is an arrogant company. They don’t believe it’s necessary to provide humans to talk to their customers. This is the same culture that lost control of data provided to Cambridge Analytica. They really don’t care. Perhaps that’s why Procter and Gamble concluded that much digital advertising was a waste.

The Shale Revolution, which is leading us to American Energy Independence, is increasingly a technology-reliant business with engineers seated in front of computer terminals remotely guiding a drill bit to within inches of its target. Happily, the energy business still finds value in humans to run things.

We are not invested, and have never been invested, in FB