Most of the U.S. has been unseasonably cold – enduring twelve consecutive days of sub-freezing highs in New Jersey while owning a home in SW Florida is your blogger’s self-inflicted wound. The pain is only slightly ameliorated by news of record natural gas consumption of over 140 Billion Cubic Feet (BCF), almost twice the annual daily average.

You’d think that would be enough to satisfy demand, but the extended cold weather has exposed gaps in New England’s energy strategy. The region’s desire to increase its use of natural gas for electricity production is not matched by enthusiasm for infrastructure to get it there. Consequently, prices reached $35 per Thousand Cubic Feet (MCF) recently, roughly ten times the benchmark. Even at that price sufficient quantities weren’t available where needed, with the consequence that burning oil was the biggest source of electricity generation during this period. 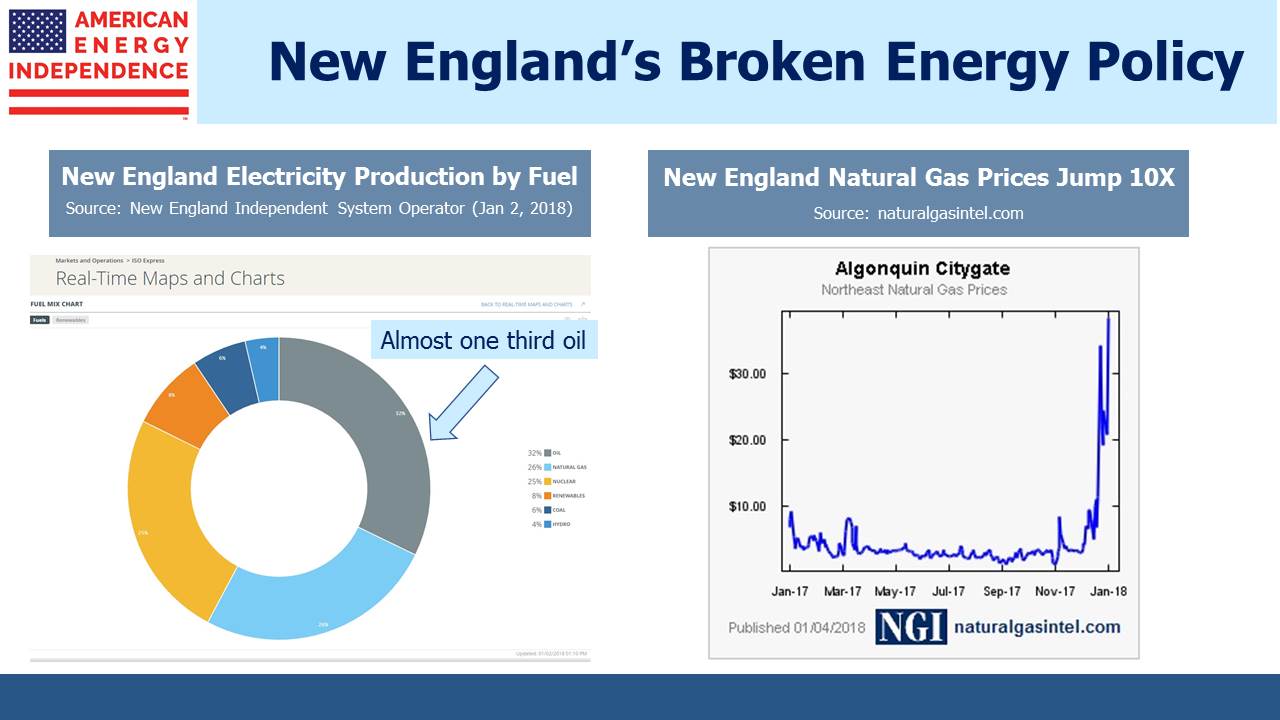 In many cases, environmentalists’ views on natural gas are self-defeating. As a replacement for coal it surely reduces harmful emissions, and the widespread switching of coal-burning power plants for gas-burning ones represents a great success for environmentalists — for all of us. U.S. electricity generation is cleaner than in Germany (see It’s Not Easy Being Green). The New England Independent System Operator (ISO) has increased natural gas usage from 15% of electricity generation in 2000 to where it’s the most used fuel (other than very recently).  They correctly note that natural gas supports increased use of renewables, since wind and solar power are intermittent.

It should be a good story, except that the ISO’s increasing reliance on natural gas is opposed by environmentalists blocking the necessary additional infrastructure. In the last couple of years Kinder Morgan (KMI) and Enbridge (ENB) both cancelled projects that would have improved natural gas distribution and storage in the region. This was because of adverse court rulings, and regulations that dis-incentivize utility customers from making the necessary long term purchase commitments, without which infrastructure doesn’t get built.

As well as enduring the highest natural gas prices in the country, Massachusetts also imports Liquified Natural Gas (LNG). New England relies on LNG for 20-40% of its natural gas needs during winter. The Jones Act is a Federal law which requires intra-U.S. shipping to be carried out on U.S. owned, built and crewed ships. It’s expensive, and although this point is not the fault of Massachusetts, it means they’re importing LNG from Trinidad, even though the U.S. exports some of the cheapest LNG in the world. There’s little natural gas storage in the region, because the geology doesn’t support underground storage and opponents have prevented construction of above-ground facilities. Consequently, LNG is imported to Boston when needed in the winter, as long as a winter storm doesn’t disrupt shipping. 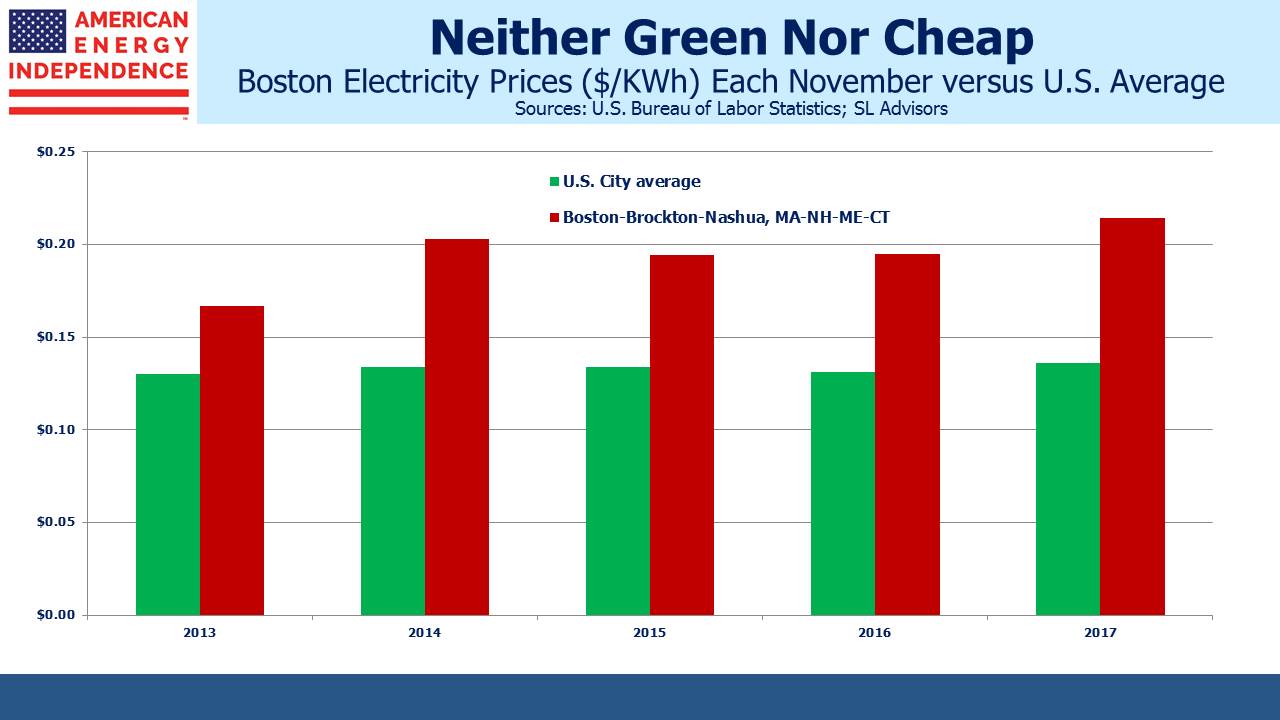 The high prices for natural gas in New England aren’t the only problem though. The recent jump in oil use for electricity generation is hardly consistent with lowering emissions. Meanwhile, New England’s ISO is warning that infrastructure development is inadequate, which risks the reliability of the electricity supply and in extreme cases may result in “controlled power outages”. The U.S. Bureau of Labor Statistics reported that in November 2017 the Boston area paid 57% more for electricity than the U.S. average, compared with only 28% more five years ago. It’s not just a winter problem. For 2017 (through November) Boston prices were 175% of the national average. New England is a wonderful region of the U.S., but its residents are poorly served by a dysfunctional energy strategy.

On a different topic, global auto sales exceeded 90 million units for the first time last year. China was 25% of the total. 2018 is likely to be another record. This is why the International Energy Agency is forecasting a 1.3% increase in crude oil demand this year.

The investable American Energy Independence Index (AEITR) finished the week +2.7%. Since the November 29th low in the sector, the AEITR has rebounded 12.4%. For most of 2017 the strength in Utilities contrasted with energy infrastructure weakness. However, this relationship has sharply reversed, with the Utilities Sector SPDR ETF (XLU) falling 9.3% since the late November low in AEITR. In mid-November we highlighted the poor relative valuation of the Utility sector (see Why the Shale Revolution Hasn’t Yet Helped MLPs). As the Administration announced plans to open up most of the offshore U.S. for oil and gas exploration, Interior Secretary Ryan Zinke declared, “We’re going to become the strongest energy superpower.”

We are invested in ENB, LNG and KMI.