Even After A 30% One Year Return, Pipelines Remain Cheap

When the MLP structure dominated midstream energy infrastructure almost a decade ago, yield was a popular valuation metric. MLPs typically paid out 90% or more (sometimes over 100%) of their Distributable Cash Flow (DCF). Comparing MLP yields with the ten year treasury provided a measure of historic valuation.

By this metric, midstream isn’t cheap. The MLP spread is 0.20% narrower than 25 year average. 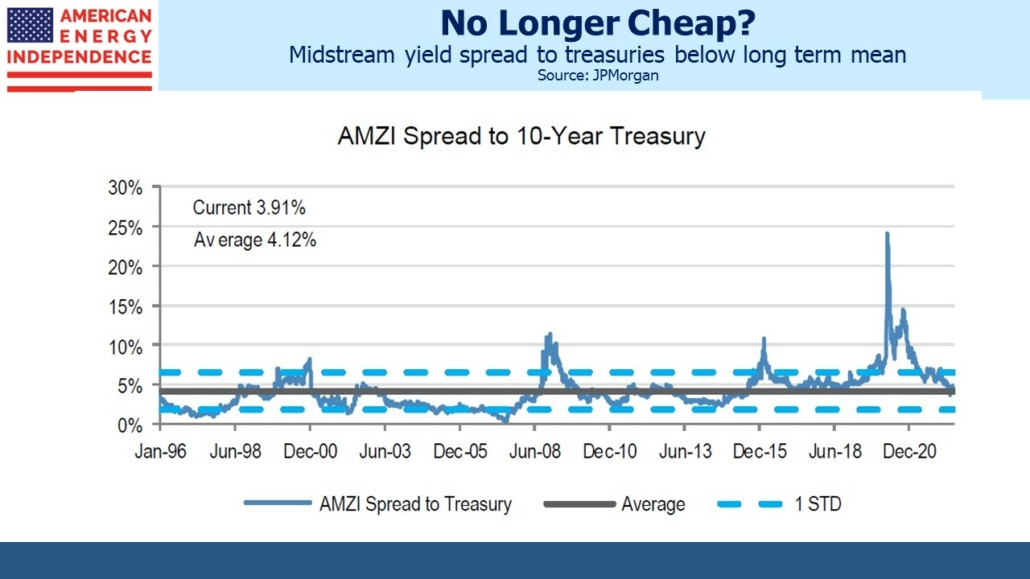 But much has changed for the sector in recent years. C-corps are the prevailing corporate form. Financial discipline has returned after the profligacy of a few during the Shale Revolution. Growth capex has declined, helped by opposition from climate extremists (hug one and offer a drive) whose success in stalling projects has given pipeline companies one less thing to do with their cash. It’s also increased the value of existing infrastructure. More recently, war in Europe has made energy security a political objective for the first time in living memory. 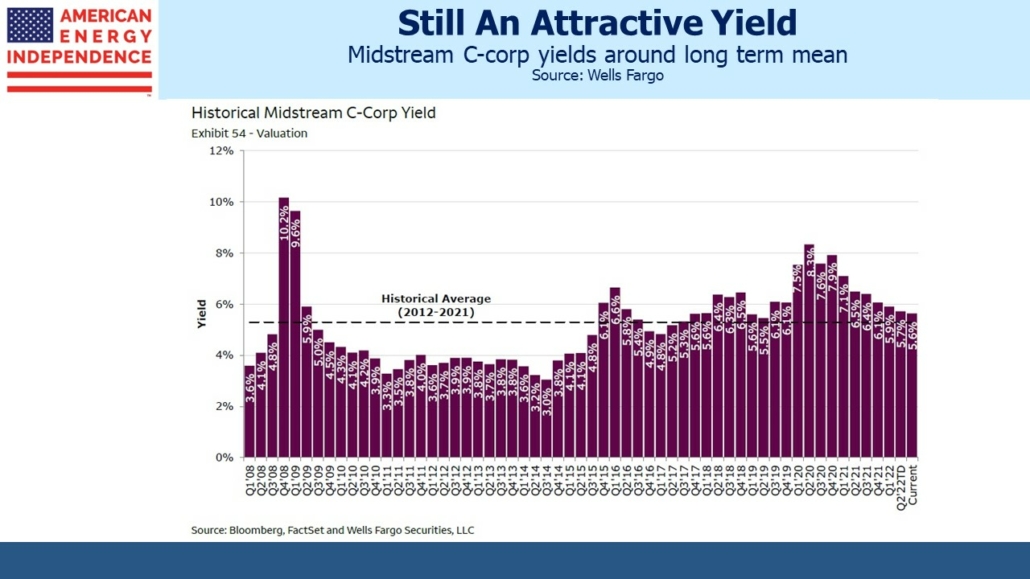 Midstream corporations tend to have lower yields than MLPs but have maintained dividends more reliably. MLP payouts have slid by almost half over the past eight years. There remains a valuation discount in retaining the MLP structure. Enterprise Products Partners, one of the best run MLPs, still yields 6.6% even though they maintained their distribution through the five year bear market that climaxed with Covid in 2020. 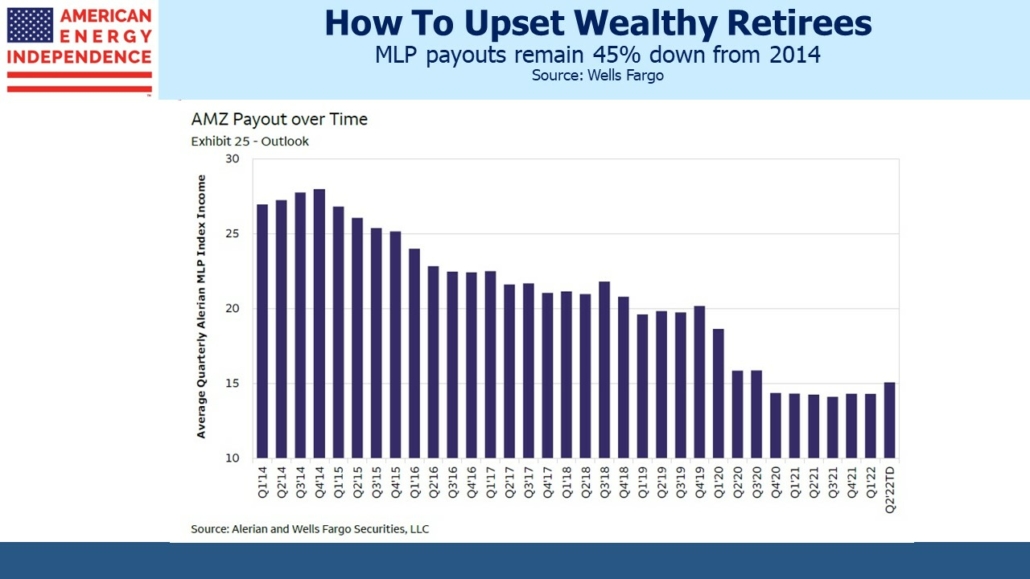 It’s also worth noting that, although sector indices show March 2020 was the lowest the sector has traded, c-corp yields never reached the highs of the 2008 financial crisis. We have often noted that forced selling by recklessly leveraged MLP closed end funds created the Covid low of 2020 (see MLP Closed End Funds – Masters Of Value Destruction). The chart of c-corp yields is another piece of evidence in support of our view. 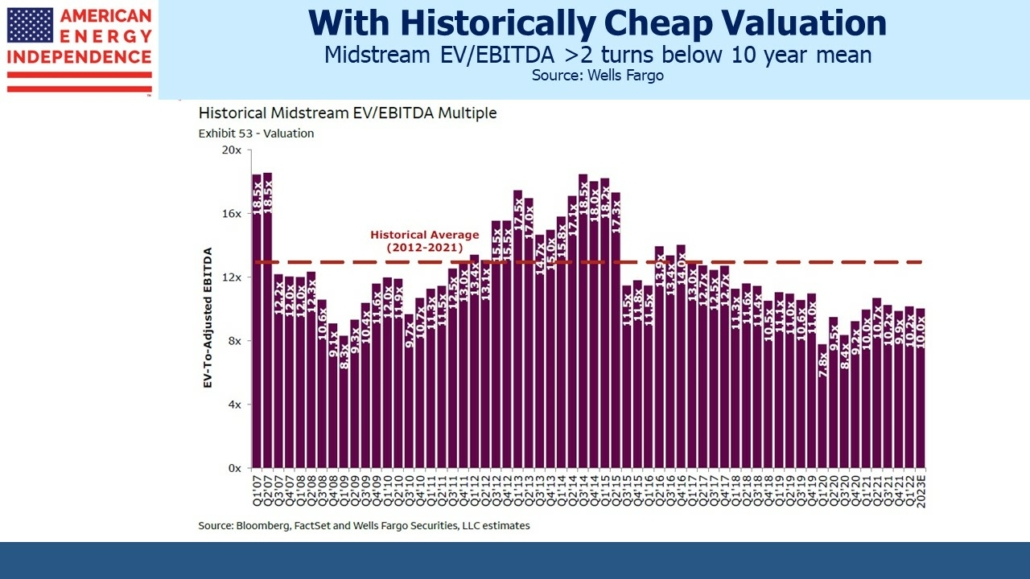 Using Enterprise Value to Earnings Before Interest, Taxes, Depreciation and Amortization (EV/EBITDA), the midstream sector is substantially cheaper than its average over the past decade. It’s also worth noting that today’s 10.2X multiple is barely changed from a year ago, even though the American Energy Independence Index (AEITR) has returned 38% since May 2021. The sector’s performance has tracked EBITDA growth. 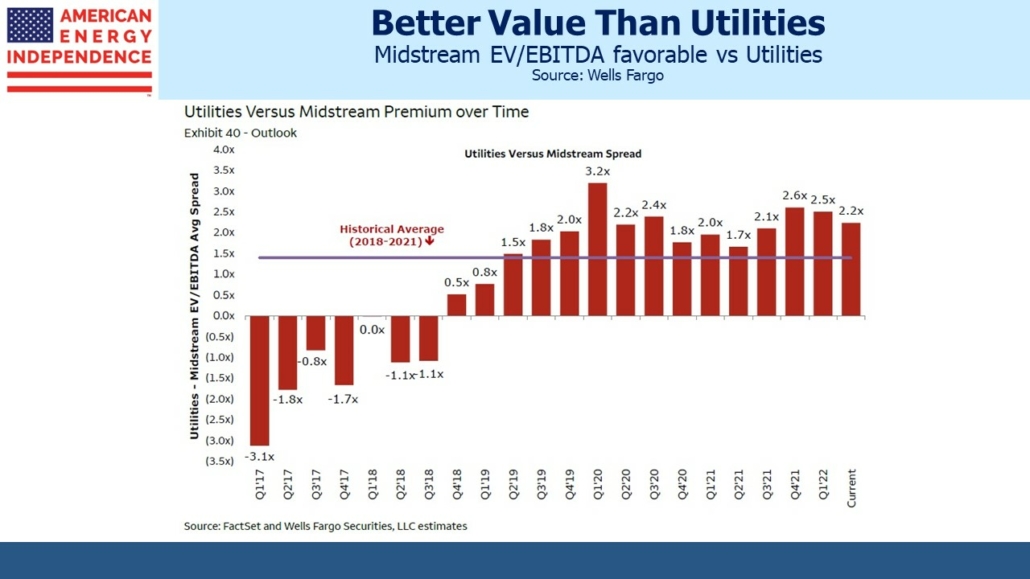 The pipeline sector is historically cheap versus utilities, often a point of comparison.

If the pipeline sector’s EV/EBITDA widens towards its ten year average of 12.5, this would trigger meaningful price appreciation. With the typical company funding about half its operations with debt, a 20% appreciation in enterprise value would translate into a 40% increase in equity. If such an adjustment took place over five years, this would imply an annual 7% capital appreciation. Add in a 5% dividend yield and you get a 12% total annual return over several years.

When investors ask us about our outlook for returns, this is the type of math we run through. The price history creates concern for some potential investors that after such a strong rally another drop is coming. But the math of valuations along with the evidence noted above that MLP closed end funds caused more trouble than they’re worth ought to assuage such worries. 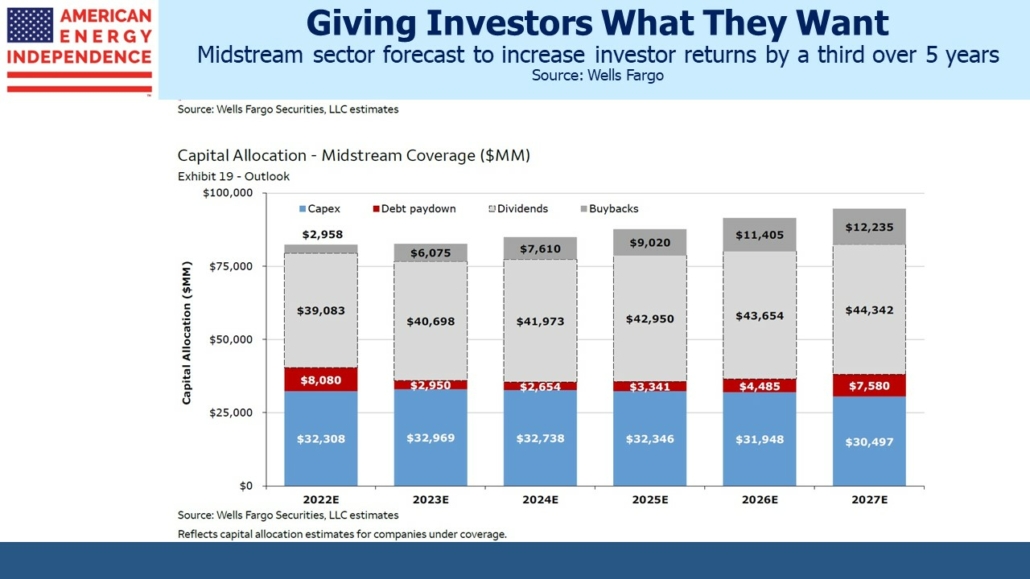 The capital allocation chart should provide further comfort about the pipeline sector’s long run prospects. Wells Fargo is projecting a 2.5% growth rate for dividends, and a 4X jump in buybacks. Capex is expected to stay flat, with roughly half dedicated to maintaining existing infrastructure (“sustaining capex”) and the balance for new growth projects. US energy executives show little inclination to push up spending initiatives. They recognize how fickle public policy is.

Democrats’ concern about gasoline prices has leavened somewhat their hostility to traditional energy – but few believe it’s anything more than political tactics prior to the midterms. Multi-year capital investments in oil, gas and related infrastructure still come with a highly uncertain IRR. 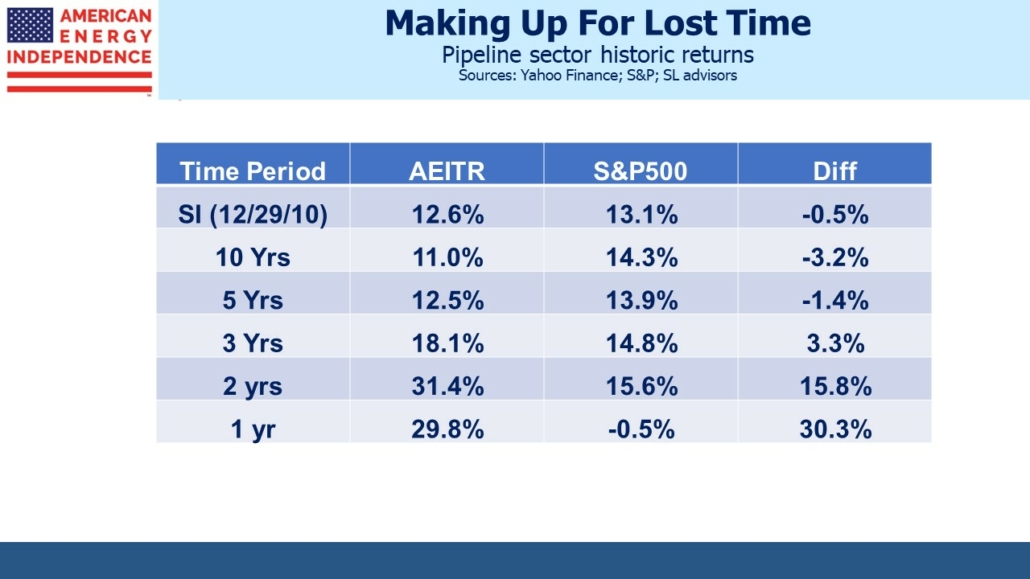 The 2.5% dividend growth rate can be added to the 12% projected return derived above. This is why a mid-teens, 14-15% pa total return is a reasonable bet even after recent strong performance. The AEITR’s long term returns versus the market no longer reflect substantial underperformance. Over the past one, two and three years pipelines have beaten the market. A few good days will make that true over the past five years as well.

Meanwhile Russia’s invasion of Ukraine can never be undone. Global energy trade is transitioning to reflect geopolitical and national security objectives, not simply commercial ones. Most countries either have energy independence or have no hope of attaining it. America is exceptional, in that we achieved it. US natural gas stands poised to provide secure energy supplies that often displace coal. The sector continues to offer fine prospects.