The inaugural ESG Day is becoming more common. Enterprise Products Partners (EPD) held theirs in early March. Pipeline companies are quite rightly asserting their role in combating climate change. EPD noted the beneficial effects of natural gas in limiting coal consumption.  SVP Tony Chovanek also discussed the growing interest in clean-burning hydrogen. Every energy company that can is talking up hydrogen on their earnings calls, although EPD’s plain spoken CEO Jim Teague noted on their 3Q call in October that, until it’s cheaper to produce, …” this one is going to take a while to develop.” 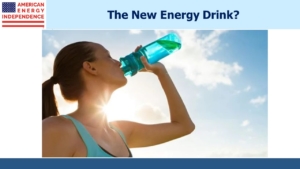 As a fuel, hydrogen’s most appealing quality is that when combusted, it generates heat and water. The technology to produce it is well understood, although the cost makes it higher than conventional fuels. Hydrogen is well suited to be moved and stored through existing pipeline infrastructure, which is why today’s energy infrastructure companies are increasingly talking about it if not yet making large scale investments.

The vast majority of hydrogen is produced from natural gas or coal, in an energy-intensive process that produces around 830 million tonnes of CO2 annually. In the color-coded world of hydrogen production, this is known as “grey”. “Blue” hydrogen relies on the same inputs but captures the CO2 emitted in its production. “Green” hydrogen is produced using renewables and offers the potential for emission-free energy if costs can be brought down substantially.

Green hydrogen is produced using electrolysis powered with solar or wind – hence no emissions. It separates the hydrogen molecules from water. It’s currently less than 1% of produced hydrogen, becayuse it’s expensive. The EU’s 2030 Hydrogen Strategy seeks to create a new “green hydrogen” industry producing 40 Gigawatts (GW) of hydrogen by 2030 (versus 0.1 GW now), and 500 GW by 2050. Electrolysis is an energy hog. Goldman Sachs, in a report called Green Hydrogen, noted that at least 2GW of power is required for each 1GW of hydrogen produced. This only makes sense if power is free, or nearly so.

Solar and wind are both weather-dependent and unresponsive to demand shifts. Using solar for example during the middle of the day, when the sun’s high and electricity demand dips between the peaks of breakfast and dinner time, could be a good way to store energy that would otherwise be wasted. In the EU, Spain and Portugal would be attractive candidates for using solar to produce hydrogen, as would the SW U.S.

An Italian utility, Snam, has estimated that a hydrogen pipeline from sunny North Africa to Italy could deliver energy at just 13% of the transportation cost of an ultra-high voltage power line.

A U.S. pipeline investor who bears the scars of the increased investment caused by the Shale Revolution might pause at this point. Although the U.S. has no equivalent to the EU’s 2030 Hydrogen Strategy, the Biden administration is surely working on one. In some regions such as southern California, hydrogen is being blended into the natural gas supply.

The last thing U.S. midstream energy infrastructure investors want is another period of increased growth capex. In the EU, a group of gas transport operators estimated that modifying natural gas pipelines to move hydrogen would require €40BN of investment over 20 years, or $2.4BN p.a. In 2018 the U.S. industry spent $45BN on growth capex, so this seems manageable.

Pipeline investors will be relieved to know that hydrogen is well suited to move through natural gas pipelines, though some modifications would be needed.  Hydrogen has nearly twice the energy density of methane, but less than half the energy content by volume, because it’s so light. So more cubic feet of hydrogen are needed to deliver the same energy as natural gas.

Hydrogen burns with an almost invisible flame, by contrast with the familiar blue flame of natural gas. Prolonged exposure to hydrogen can make the steel used in pipelines brittle, although companies like EPD already supply hydrogen to industrial customers so are familiar with that problem. America’s has 1,600 miles of hydrogen pipelines already, with the biggest network located in Texas. Perhaps most interesting is that hydrogen molecules (H2) are small enough to leak through metal if stored for an extensive time. This creates challenges with long term storage, although salt caverns can be repurposed from holding natural gas to hold hydrogen.

In Utah, Intermountain Power Project (IPP) burns coal to generate electricity for southern California. It plans to convert to a 70/30 blend of natural gas (methane) and hydrogen by 2025 and expects to be 100% hydrogen by 2045, aided by hoped for improved technology. The plant is conveniently located atop a vast salt cavern which will be used to store hydrogen. Natural gas power plants can be modified to run on a methane/hydrogen blend, adding further to their clean energy credentials.

The EU’s 2030 Hydrogen Strategy is going to jumpstart a new industry. The existing European pipeline network will be key to European plans for reduced emissions. North American pipeline companies should be well situated for a similar initiative here.

There was some additional clean energy news last week — NextDecade (NEXT), which plans to deliver Liquified Natural Gas (LNG) while capturing the CO2 produced during liquifaction (see Making LNG Cleaner) announced an agreement with Oxy Low Carbon Ventures (a unit of Occidental) to transport and permanently store CO2. Solar panels and windmills are far from the only story in the energy transition.