S&P earnings are estimated to be +8% this year, according to Factset’s most recent publication. The sharp sell-off in stocks last week shows that markets are looking ahead to revised guidance. Covid-19 is a true black swan event that is challenging people to assess its impact. For example, my daughter just canceled a Caribbean cruise because she has three young children, including a four month old. The cruise line’s “Coronavirus update” spooked her, even though it only applied to Asia. My nephew, a UK-based virologist sequestered to work on the virus, advises that we will adapt to a new, seasonal flu for which annual vaccinations will eventually be available. A week ago I bought some face masks on Amazon.

In an abundance of caution, 14% of regular drinkers of Corona beer are shunning the beverage. Since comparing the fatality rate of Corona with coronavirus is a few clicks away on a smartphone, employed Corona drinkers likely exhibit limited mental dexterity.

Covid-19 is both more infectious and deadly than the seasonal flu, with a fatality rate that is estimated at 2-4% for Hubei Province where it started, and 0.5-1.0% in other parts of China. Locking down entire cities, as the Chinese government has done, promoting “social distancing,” and numerous canceled sporting events all hint at severe economic disruption. The results will show up in most corporate earnings reports for this quarter and possibly beyond. The S&P500 moved from another record high to a 10% correction in just six sessions, the fastest in history. On Friday it closed 12% below its February 19 high.

Crude oil fell $8 per barrel, dragging the S&P Energy ETF (XLE) down 17%, and the rest of the sector with it. Unlike the S&P500, XLE was not retreating from a recent all-time high either. The attractive yields on pipeline stocks offered only modest valuation support, with the American Energy Independence Index (AEITR) falling 14% from its February 19 recent high. 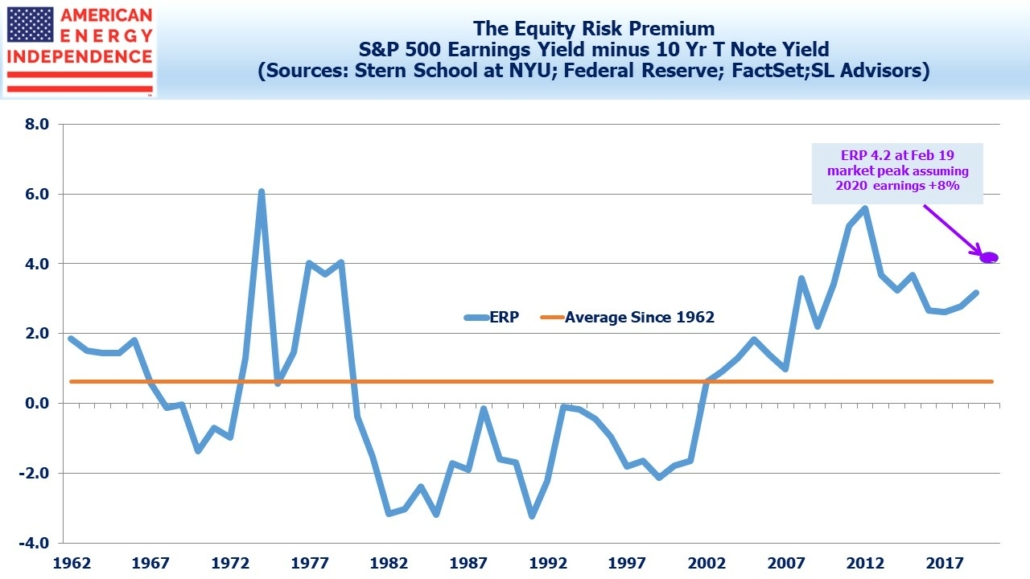 We updated our Equity Risk Premium (ERP) model to offer a guidepost in all the uncertainty. In December, we noted that the spread between the earnings yield on the S&P500 and ten year treasuries (the ERP definition) still favored stocks, but not as much as it had in the past. We also pointed out that fixed income buyers were keener to invest in energy infrastructure than stock investors (see Pipeline Bond Investors Are More Bullish Than Equity Buyers).

Today’s investors in stocks confront substantial near term uncertainty and the possibility that extended economic disruption will lead to a recession, a warning offered by ex-Fed chief Janet Yellen.

At its recent peak on February 19, the ERP was at 4.2. Following the recent drop, assuming 2020 earnings are flat rather than the +8% from Factset’s forecast, equity valuations are roughly unchanged with an ERP of 4.5. 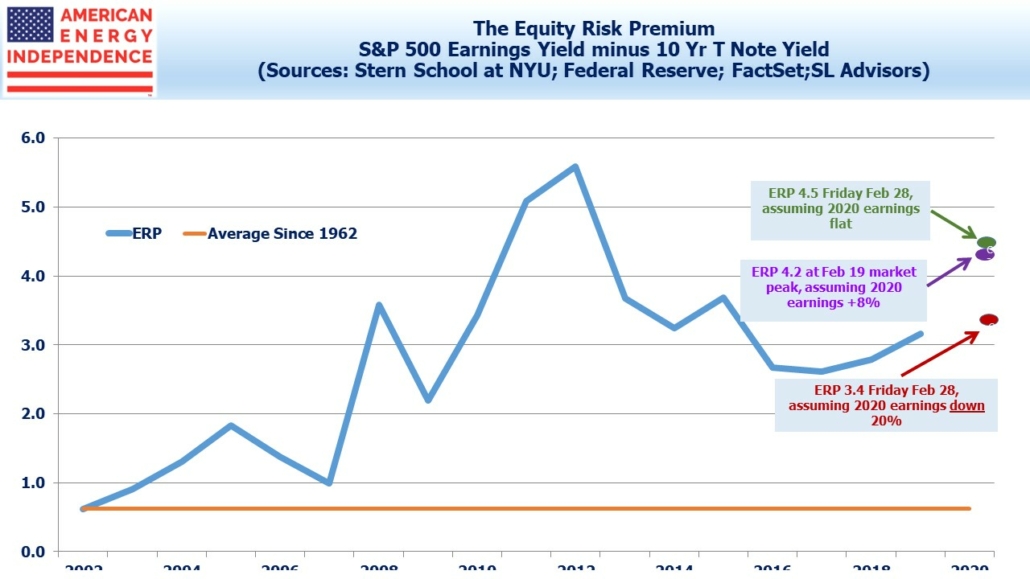 The problem is that it’s still difficult to assess the earnings hit covid-19 will cause. Economic activity in China appeared to collapse, with coal consumption 40% below normal. Japan has closed all its schools until early April, affecting 13 million students. The U.S. Center for Disease Control (CDC) described the potential public health threat as high, both globally and to the United States. We can imagine the consequences of a U.S. region or major city confronting an outbreak.

A 20% drop in earnings would exceed the 2008 financial crisis. A very severe covid-19 recession in the U.S. would be required to cause this kind of fall in profits. The ERP might not be many people’s first thought in such an outcome, but suffice it to say that stocks aren’t cheap if you rate this as a real possibility.

Although crude oil’s fall in response to economic weakness has hurt energy infrastructure stocks, we continue to expect substantial growth in free cash flow this year and next. Other than Cheniere Energy, who have seen a couple of shipments of liquefied natural gas cancelled, the virus has had very limited impact on the sector’s outlook. The components of the AEITR yield 8.2%, with mid-single digit percentage dividend increases expected for the next several years.

We are invested in all the constituents of the American Energy Independence Index, which includes Cheniere Energy, Inc.