The relationship between crude oil prices and pipeline stocks is a perennial subject – why do the toll-like features of midstream energy infrastructure sometimes fail to separate the sector from the vicissitudes of commodity markets?

The truth is they move together more at certain times than others. The 2015 drop in crude caused by excessive production in the US shale patch hit the pipeline sector – unreasonably so since demand remained buoyant throughout. Pipeline stocks rebounded faster than oil. The 2020 Covid collapse reflected a sharp drop in demand because everyone was locked down, so weakness in pipelines made sense although it was exacerbated by some fund managers whose self-confidence exceeded their ability (see MLP Closed End Funds – Masters Of Value Destruction). 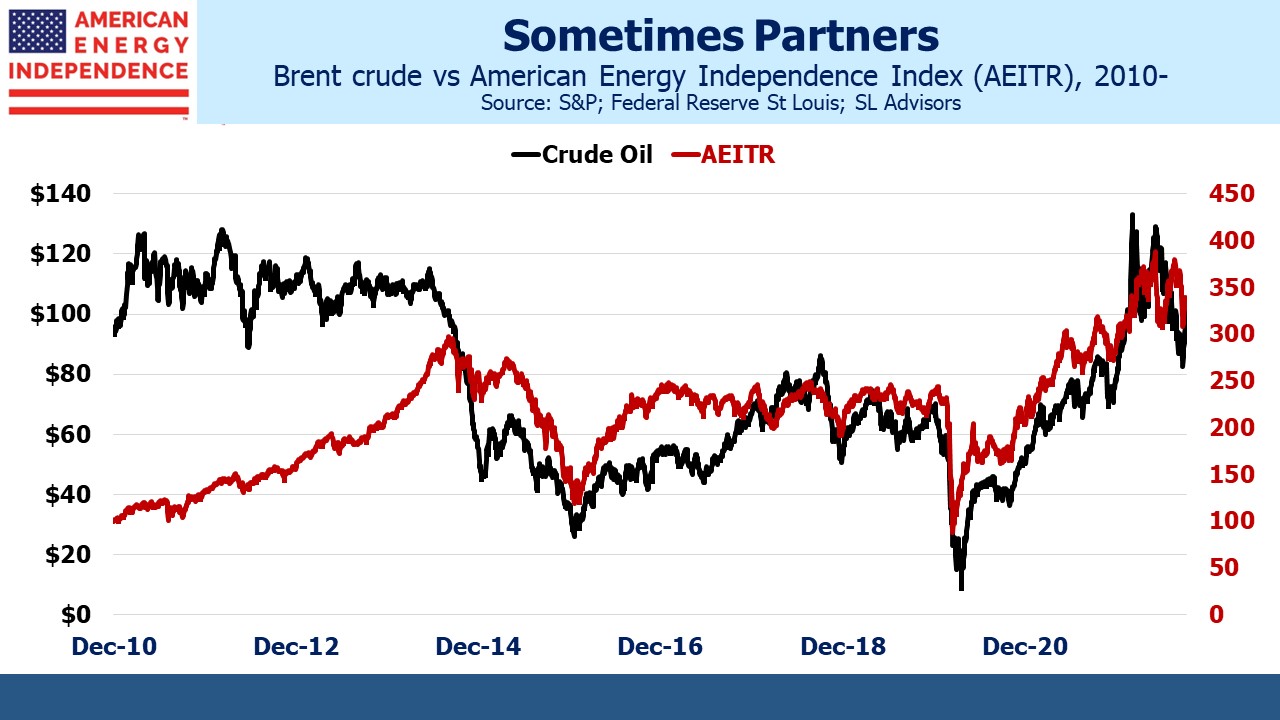 The relationship doesn’t just stand out during periods of weakness. The American Energy Independence Index (AEITR) and oil have marched more or less upward together for the past couple of years, a relationship that has elicited few complaints. 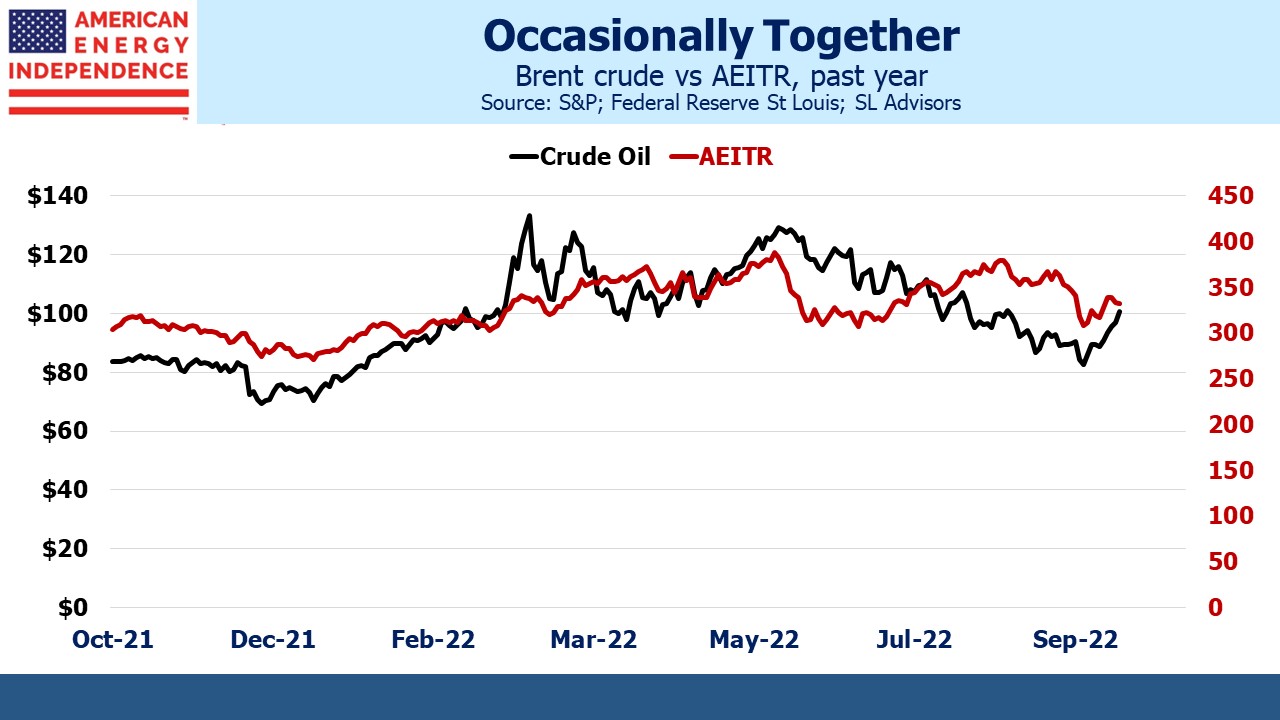 Measuring the relationship statistically reveals a positive correlation of around 0.4. They move together, but not so reliably as to allow for one to be used to hedge the other. Our recent blog highlighting the cheapness of oil relative to coal (see OPEC+ Strikes Back) drew several questions about the outlook for crude and whether pipelines were a good way to express a bullish view. 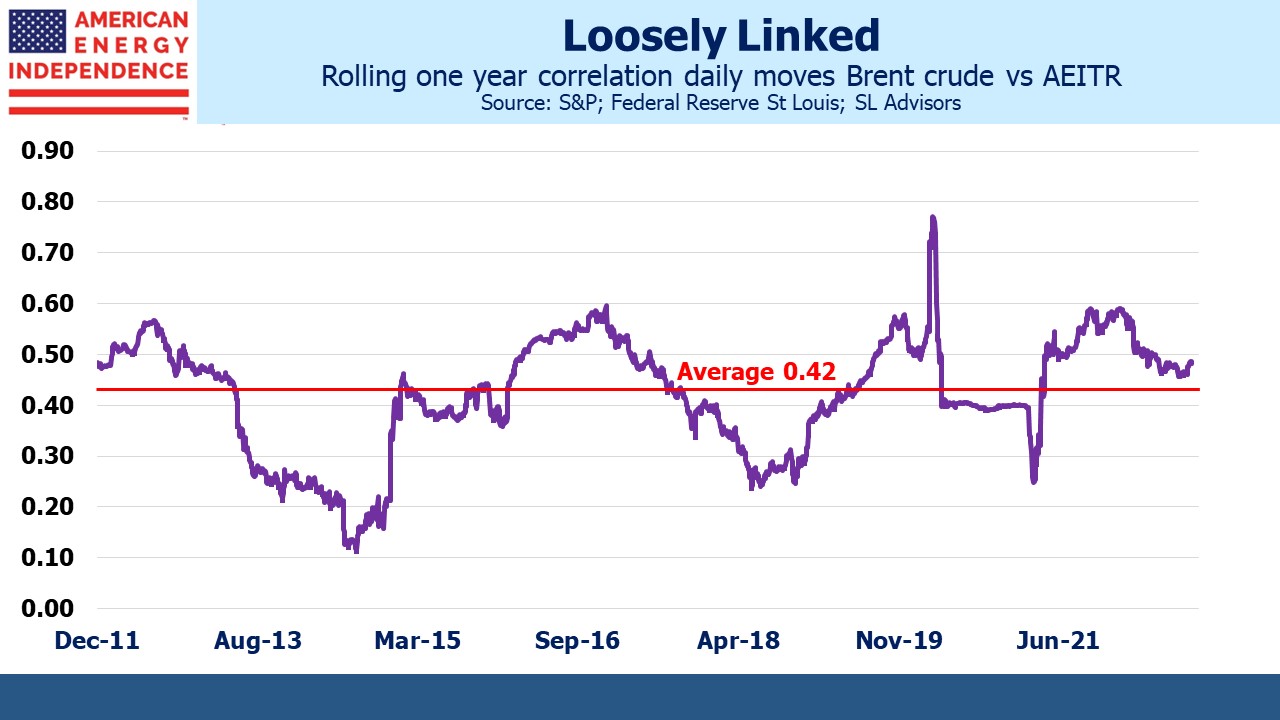 We do think the balance of risks is skewed to the upside. Upstream companies probably offer a more straightforward way to bet on rising crude. Midstream should do well in most outcomes including flat commodity prices.

As we enter earnings season, Factset calculated that the energy sector is all that stands between S&P500 3Q earnings growth and a down quarter. Specifically, +2.4% versus –4.0% ex-energy. Seven of the 11 S&P sectors are forecast to be negative. Moreover, expected energy sector earnings have been revised up this month, to $53.1BN from $50BN.

I will concede that at times the relentless outperformance of a few enormous tech stocks left me less enthused than the typical investor whose portfolio seemed stuffed full of FANG. Therefore, from your blogger’s vantagepoint the recent defanging of the market in favor of hard assets represents an appropriate restoration of relative value.

Mike Shellenberger is an environmental advocate who has written several books and is running as an independent against California governor Gavin Newsom. I read Apocalypse Never: Why Environmental Alarmism Hurts Us All, which offers a break from the shrill alarmism common among many climate extremists with a more sober assessment. Shellenberger is a big supporter of nuclear power, as should be any serious proponent of efforts to lower CO2 emissions. I haven’t read San Fransicko: Why Progressives Ruin Cities but I suspect it offers some useful insights because San Francisco is not what it used to be.

Shellenberger recently gave a presentation in Sydney, Australia in which he argued that increased penetration of intermittent energy into a grid raises its cost.

More solar panels and windmills require increased investment in battery storage and reliable power (such as natural gas) to be there when it’s not sunny or windy.

Electrification of our transport system requires substantial investments in transmission, something Senator Joe Manchin’s stalled effort to improve infrastructure permitting seeks to improve. A few years ago Wood Mackenzie published research that explored what increased Electric Vehicles (EVs) in Texas would mean for their power grid, which operates independently from the rest of the US.

Prajit Ghosh, Wood Mackenzie’s head of America’s power and renewables research, showed that improvements in rapid charging could require 1.2 megawatts of power to charge a 100KW battery in five minutes. Assuming as few as 60,000 EVs in the state (Texas registers around 24 million cars) would use 72 Gigawatts of power, more than half the state’s total capacity. Simultaneous charging of EVs is implausible, except perhaps if a hurricane was approaching and owners rushed to anticipate power cuts when it would be a problem.

EVs make some sense, especially as charging becomes more readily available and quicker. Every EV owner I know loves their car, but also owns a conventional vehicle for long journeys. But there’s no shortage of warnings that the nation’s power grid isn’t ready. Increased electrification is likely to support natural gas demand as much as weather-dependent power.

TC Energy recently announced plans to invest C$146MM in their first Canadian solar project, in Saddlebrook Alberta where on the winter solstice sunset follows sunrise by just under eight hours. For TC Energy it represents a minor investment that burnishes their green credentials.

Investments in carbon capture appear more credible, having received a boost in the US from the inaptly named Inflation Reduction Act. Western Midstream and Occidental Petroleum recently announced plans to jointly develop “carbon dioxide (“CO2”) capture, transportation, utilization and sequestration opportunities in and around their existing asset bases in the Texas Delaware and Colorado DJ Basins.”

Alberta is selecting 19 proposals to build carbon storage hubs across the province.

European demand for US natural gas remains strong, as shown by Atlantic LNG tanker rates reaching an all-time high of $397,500 per day. Morgan Stanley recently added up agreements signed since the late February Russian invasion to export 61.27 million tons per annum. In aggregate this is 8 Billion cubic Feet per Day (BCF/D), compared with current US production of around 100 BCF/D and LNG export capacity of around 11 BCF/D. The agreements generally begin 2025-26, reflecting the lead time required to build LNG export facilities. US natural gas is what the world wants.