Having failed to renegotiate, ETE’s lawyers ingeniously devised a special issue of securities restricted to ETE management. By diluting the subsequent value of ETE units, it had the effect of lowering the value of the proposed combination to WMB shareholders while protecting ETE insiders against any dilution (see Is Energy Transfer Fleecing Its Investors?). Convertible preferred securities were issued to approximately 31% of ETE’s unitholders (that being the portion held by management), that allowed its dividend to be reinvested in new ETE units at a low price only briefly touched. Most ETE investors would likely have invested in such attractive securities had they been more widely offered. But WMB opposed their wider distribution, as they were allowed to under the terms of the merger proposal, predictably since they recognized the dilutive effect of their issuance. 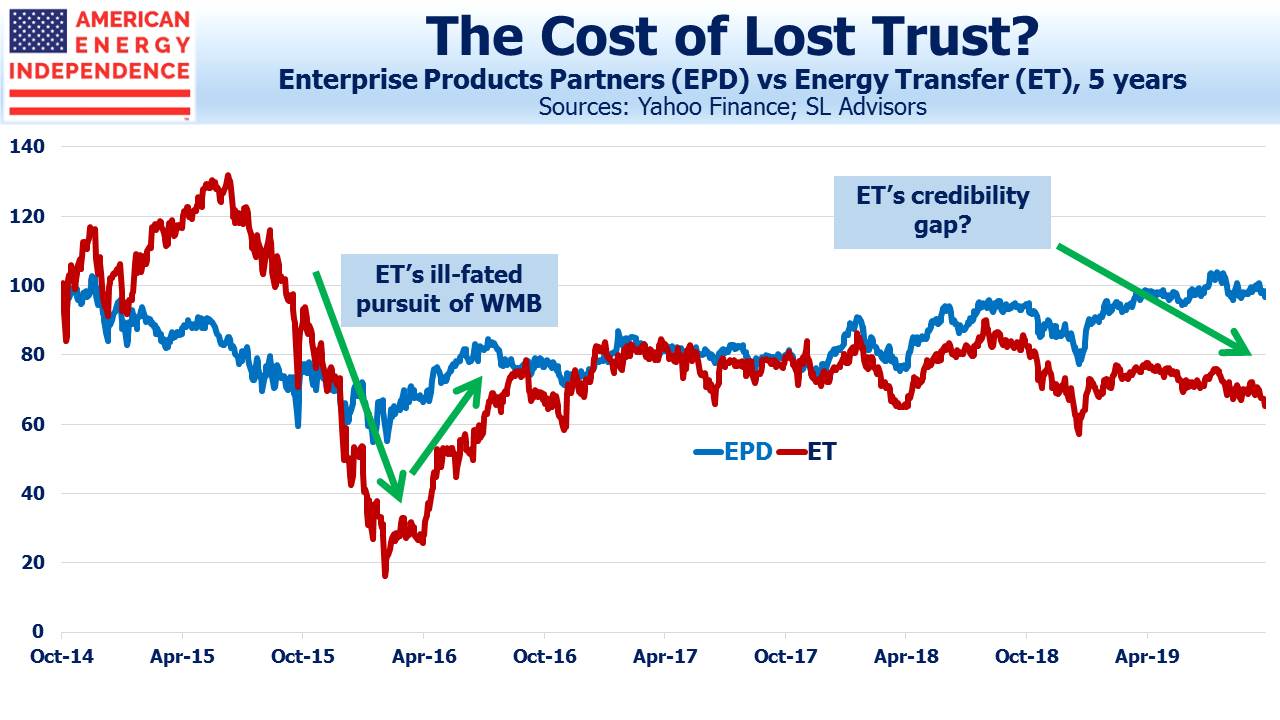 Ultimately, ETE was able to extricate itself by noting unfavorable tax treatment that would diminish the transaction’s value. The convertible preferreds, originally believed by many to exist solely as a means of destroying the deal’s value to WMB shareholders, remained following its cancellation. Thus did Kelcy Warren cement his reputation as a CEO willing to unethically extract value from his fellow owners when such opportunities present themselves.

A class action lawsuit was filed, and ETE successfully defended itself. The law was on its side, even though many investors felt cheated.

It’s interesting to look back over the three years that have passed and assess whether Kelcy’s reputation for self-dealing remains a burden on Energy Transfer (now ET following its simplification).

Operating performance remains strong. ET regularly beats expectations for quarterly earnings but its stock remains stubbornly undervalued (see Why Energy Transfer Can’t Get Respect). Earnings calls often include questions on what ET can do to get the stock higher, with Kelcy lamenting the market’s lack of appreciation for his team’s value creation.

By most measures ET is attractive. It offers a 9.6% yield, almost 2X covered by Distributable Cash Flow (DCF). Leverage is coming down and their growth projects are self-funded, meaning there’s no additional sale of equity to raise cash.

Master Limited Partnerships (MLPs) offer weaker governance protections to investors than corporations. Tallgrass Equity (TGE) recently demonstrated this when Blackstone’s (BX) offer to acquire the 56% of the company they don’t already own drew attention to a sideletter providing a higher sale price of TGE stock held by management in such an eventuality (see Blackstone and Tallgrass Further Discredit the MLP Model). TGE CEO David Dehaemers showed that the acquisition of a publicly traded partnership doesn’t require a big control premium paid to all the owners – only to management.

It struck us, and ought to assault the sensibilities of every asset manager who owns TGE, that the CEOs of publicly traded partnerships are spectacularly unconstrained by the ethical standards  followed by the people who buy their stock. We invest alongside our clients like most CEOs, but the notion of selling our own shares in a jointly held position higher than our investors is unfathomable, and illegal. Evidently not so for TGE. Whether the BX deal is accepted or modified in some way to try and assuage the appalling optics, Dehaemers has joined Kelcy Warren in ignominy.

It’s become clear that weak governance is affecting the value of some MLPs. A few management teams are trusted to deal fairly, but ET may inadvertently be a casualty of TGE’s demonstration of who holds the high cards.

ET’s stock looks like a bond at the bottom of the capital structure. It pays a high yield easily supported by cash flow, but its holders (being equity investors) have no class of investor beneath them. The upside opportunity that usually compensates equity holders is denied ET investors, because in any sale of ET they should expect the control premium will somehow accrue only to management and not to all ET equity holders. TGE has shown how it can be done.

We calculated that ET insiders transferred over 1.3BN in unethical value to themselves through the convertible preferreds in 2016. However, given ET’s relative performance since then, it looks like a Faustian bargain. They’ve dissuaded investors whose purchases might have driven ET’s yield down by the 3% or so that would equate its valuation more closely with Enterprise Products Partners (EPD), another big MLP but without ET’s history. That would reprice ET stock 50% higher. The management’s team’s 13.5% stake (now lower, since the 2018 simplification resulted in a larger company) would be worth an additional $2.2BN, So the valuation haircut on management’s holdings is more than the 2016 transfer of value. Kelcy’s dubious ethics have burdened ET’s stock for the worse, costing everyone, including the people running the company.

We are invested in ET and EPD