Earlier today Enbridge (ENB) CEO Al Monaco held a “virtual fireside chat” with an analyst from RBC. ENB, like the other Canadians, is run more conservatively than many U.S. businesses. We’ve often noted that a bit more Canadian management would be beneficial in the U.S. energy sector.

The slides below are from the ENB presentation deck that was published at the same time. 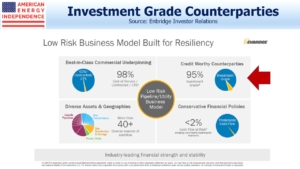 We estimate that within the American Energy Independence Index (AEITR), 80% of the customers are investment grade. ENB does better than this with 95% as this slide shows. 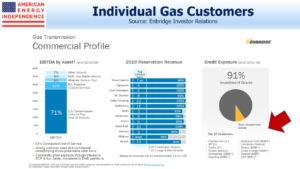 This chart lists the profile of their natural gas customers. Monaco noted that these customers are often “must-run” facilities such as power plants in the north east U.S. and Canada. He also said that many of their liquids customers run the most competitive, complex refineries. 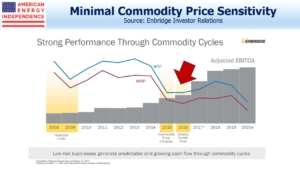 This slide shows how their EBITDA showed no visible hit from the 2014-16 collapse in crude prices, even though Canadian tar-sands is among the most expensive crude oil to produce. 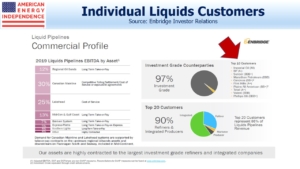 This chart lists their top ten liquids customers along with their credit ratings. 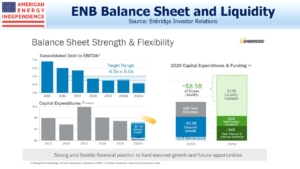 ENB has been reducing their leverage in recent years. This is because their backlog of growth projects has been coming down. In 2015-16 they had a $25BN backlog, whereas today they have half that with $6BN remaining to fund for new investments over the next three years. 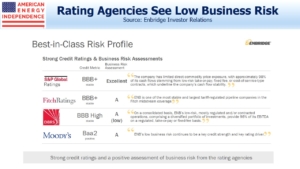 Monaco sounded very calm about his company’s position. We think they’re the kind of company that can get through just about any plausible economic disruption.

We are invested in ENB.