Emissions To Rise Under Democrats

By the end of President Biden’s first year in office, his administration’s report card on climate change will offer some uncomfortable facts. Natural gas, after taking market share from coal for power generation under the Trump administration, will see those gains reversed. In the U.S. Energy Information Administration’s (EIA) most recent Short Term Energy Outlook, they forecast that U.S. coal consumption will increase its share of power generation from 20% last year to 24% by next. The biggest source of falling CO2 emissions in the U.S. has been the reduction in burning coal, a trend that pre-dated the last administration but continued through it. 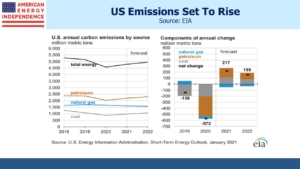 President Biden will no more accept the blame for this unhappy shift than Trump could claim credit for the positive trend that preceded it. But policy changes are partly the cause. 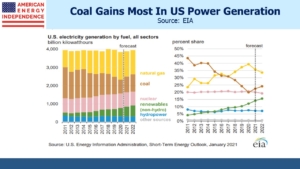 Natural gas consumption grew over the past several years because it was cheap. Trump’s pro-energy stance stimulated oil and gas production, much to the chagrin of investors who would have benefited from less. Prices have been rising recently, and although there are many global macro factors at play, the chilling effect of Democrat policies on new fossil fuel production is playing a part. 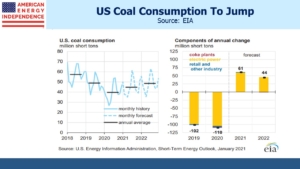 Over the next two years, world liquids fuel consumption is expected to recoup the Covid slump, so that 2022 will look much like 2019. The same is true in the U.S. 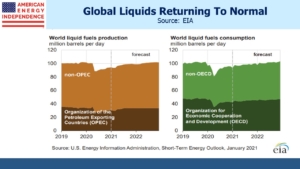 Optimists will point to the growth in solar and wind energy, whose share of U.S. electricity production is set to increase, from 12% last year to 16% in 2022. However, nuclear power will lose 2% (from 21% to 19%), as continued opposition which includes climate extremists reduces one source of zero-emission power. Add in a 1% drop in hydropower, and clean energy is set to gain 1% market share over the next two years – hardly dramatic. 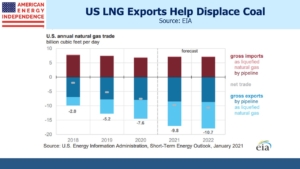 As a result, U.S. CO2 emissions are going to begin rising again. By the middle of Biden’s term, there will be little to point to in terms of actual U.S. results on climate change. The entire story will be one of hope. It’ll be hard to lecture China on the need to curb their emissions, which are forecast to keep rising along with rising living standards.

Fortunately, U.S. natural gas exports are expected to keep rising. Over the next couple of years it looks as if America’s biggest contribution to curbing global emissions will be enabling the foreign buyers of our natural gas to use less coal than they otherwise would.

It’s hard to pivot towards cleaner energy. The two places where public policy has been aggressive (Germany and California) have little to emulate. Increased coal consumption to counter renewables’ intermittency (Germany), unreliability (California) and high prices (both) aren’t an appealing destination for the rest of us.

The politics of this will be fascinating. Climate extremists are likely to be frustrated at the lack of results. The Democrats’ razor-thin margin in the Senate make sweeping policy changes unlikely.

Reducing coal consumption is the low hanging fruit of reducing emissions. It not only generates twice the CO2 emissions of natural gas when burned, but also pollutes locally with fine particulate matter and nasty chemicals such as mercury. Executive actions via the Environmental Protection Agency and aggressive enforcement of existing environmental laws could increase the cost of coal, offering the new administration some chance of improved results.

Trump won three of the five biggest coal producing states (Wyoming, West Virginia and Kentucky) with Pennsylvania and Illinois voting for Biden. Democrats might therefore conclude that they have little to lose by taking on the coal industry, a move that would be easily supported by the science. It’ll be a tricky decision though, because they’d risk losing the other two.

The biggest weakness in policies to combat climate change is their reliance on supply constraints. Billions of people use fossil fuels, and we are all contributing to emissions to varying degrees. But rather than raising prices directly on the consumption of energy, policies more often seek to manage sources of supply. Public support to reduce emissions is shallow – if people believed the planet was truly at risk, nuclear energy would be an obvious solution. We’d have a carbon tax in the U.S., but that’s a political non-starter. So policy focuses on supply, because the impact is less visible.

The logical progression is to engineer higher coal prices. The natural winner would be natural gas, the only energy source with the capacity to quickly compensate for, say, a 5% drop in coal production.

Democrats own the U.S. response to climate change for the next four years. Higher energy prices are part of their strategy. It’s what energy investors would like too.