Democrat policies have so far been more positive than many expected for the energy sector. Those regions and countries that have aggressively pursued renewables have demonstrated the challenges that arise when power is too reliant on unreliable, weather-dependent sources. Crossing a 20% share from solar panels and windmills seems to be the threshold at which problems occur.

Liquified Natural Gas (LNG) shipments continue to change hands at $35 per Million BTUs (MMBTU) in Europe. Underinvestment in natural gas supply and storage is one of the reasons.

The infrastructure bill that passed the House last week includes $73BN to upgrade the nation’s power grid, along with $7.5BN each for electric vehicle chargers and low-emission buses and ferries. Shifting transportation to run on electricity rather than gasoline is key to lowering CO2 emissions. 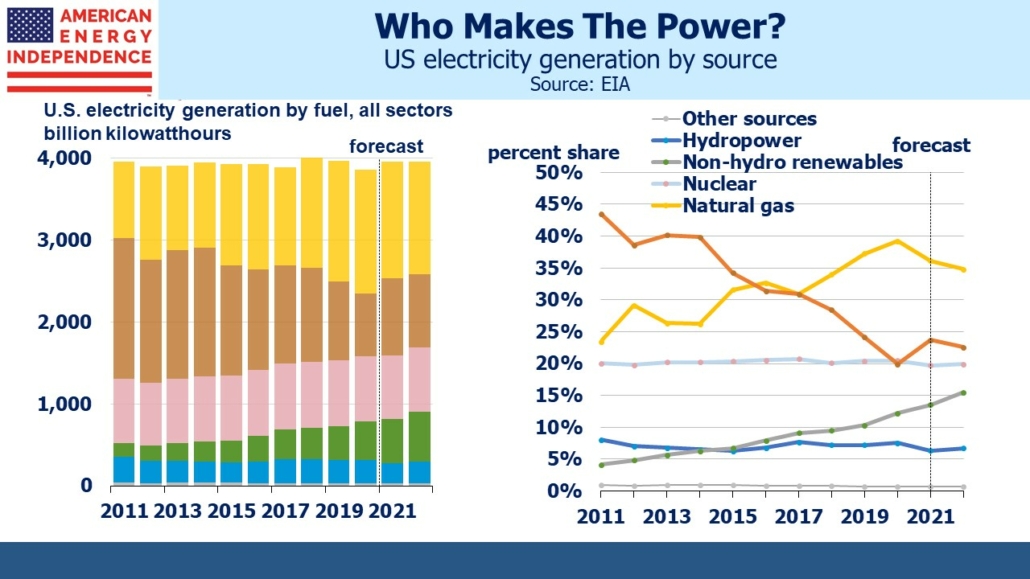 Natural gas provides 36% of America’s electricity. This is down from 39% last year, mostly because higher natgas prices have caused utilities to switch to coal, whose share has risen from 20%-24%. It’s not a trend that climate extremists will welcome, but every protester against pipelines and natural gas production has helped make this happen. Non-hydro renewables are slowly picking up market share, and are expected to reach 15% next year. Notably, the US did not join more than 40 countries in pledging to phase out domestic coal consumption. On this we joined with China, revealing the ambivalence of US climate policy and the importance of Joe Manchin (D-WVa). The White House needs Manchin’s support and West Virginia produces more coal than any other US state other than Wyoming.

Although natural gas has lost some ground in electricity generation, rising LNG exports have made up the difference. Moreover, the US Energy Information Administration sees continued growth in domestic consumption, driven by increased demand from the power and industrial sectors. Although it’s not obvious to a casual follower of renewables developments, in three decades natural gas is still projected to provide twice as much energy to Americans as renewables. 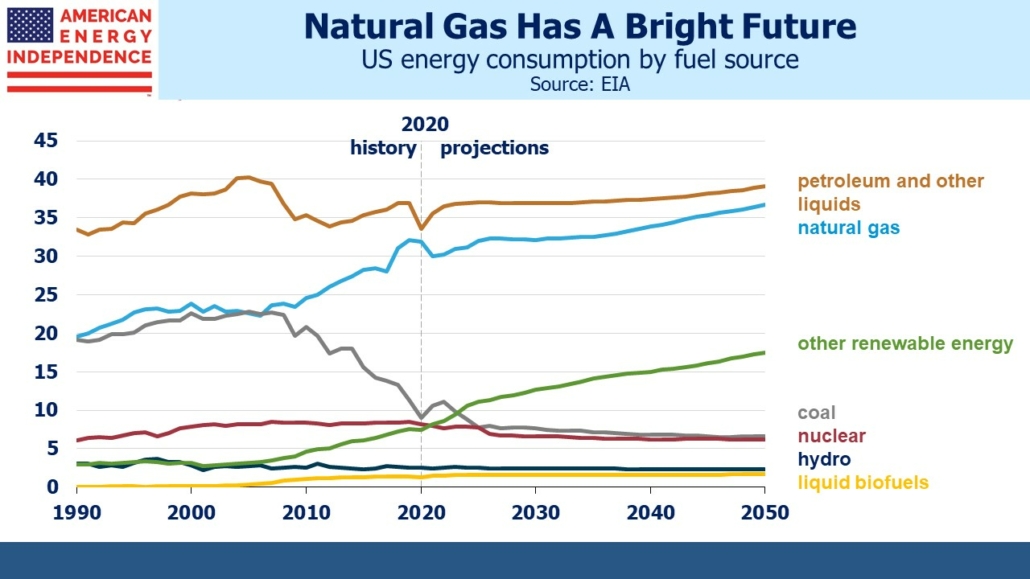 This doesn’t take account of exports, which are virtually certain to grow as emerging economies use more energy to raise living standards. Cheniere provided confirmation of this trend in recent weeks with several announcements of long term LNG supply agreements with foreign buyers (see It Takes Energy To Keep Up With Inflation). On most forecasts the world’s energy needs are likely to increase faster than renewables generation, so although solar panels and windmills will gradually pick up market share we’re likely to use more of everything. The COP26 doesn’t seem to have done much to change that.

The infrastructure bill has supporters on both sides. Investing in transportation through fixing roads and bridges and improving the rail system. The Build Back Better bill, whose passage is still not assured, includes home energy tax credits and up to $12,500 for electric vehicles manufactured by US union workers. My partner Henry once noted that conventional automobiles using an internal combustion engine are in effect built around a small generator. If we were designing personal vehicles today, we might start with battery-powered instead.

The bottom line is that increased focus on electrification of transportation looks very positive for natural gas and the infrastructure that supports it. The energy transition is going well for the energy sector.