In June of last year my wife and I fled the draconian lockdown imposed on New Jersey for the south (see Having a Better Pandemic in Charleston, SC). Whereas back then our autocratic governor had even forbidden a solitary walk in the park, Charleston SC felt like a world apart. We were left awestruck at the sight of diners enjoying an evening out. The welcome freedom was somewhat marred by BLM protests, that being the big news story of the moment. Boarded up storefronts did not present Charleston at its best, and we vowed to return at a more auspicious time.

That moment arrived 16 months later, and we enjoyed a wonderful dinner with long-time friend of the firm Jim Agostini and his delightful wife Lindsay. We found Charleston fully open. In keeping with southern manners, masks were politely requested if non-vaccinated, as opposed to demanded. Few were evident, even among the employees of restaurants and stores sporting such a sign. We all agreed we’re fed up with being required to wear a mask “for your protection” when it’s really to protect the unvaccinated who demonstrate little fear of covid. Most are moving on. 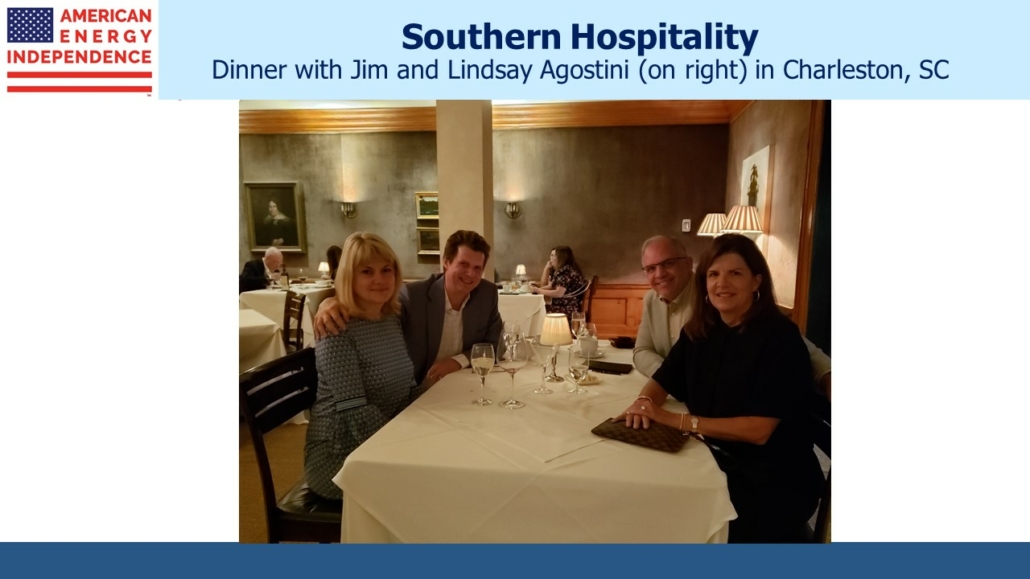 Client meetings are coming back, as financial services’ finds a new balance between the convenience of remote working and the benefits of in-person interaction. Our business went fully and permanently remote a year ago. Face to face client meetings are becoming more frequent, but not yet back to where a full day of meetings on a road trip is possible

I was interested to learn that Lindsay Agostini is a member of Conservatives for Clean Energy (CCE). In fact, Lindsay was recently named a Conservative Clean Energy Champion. CCE promotes innovation along with continued use of nuclear energy and greater adoption of electric vehicles – more pragmatic than the liberal climate extremists who have helped cause Europe’s current energy crisis.

We’ll hear more from Lindsay in the near future.

Meanwhile, the energy sector continues to strengthen, in almost willful defiance of most observers. Many have wrongly concluded that the energy transition makes the sector uninvestable, whereas the policies advocated by climate extremists are behind Europe’s energy crunch. Pushing for reduced capex is achieving the free cash flow growth investors have long yearned for but were unable to engineer themselves. 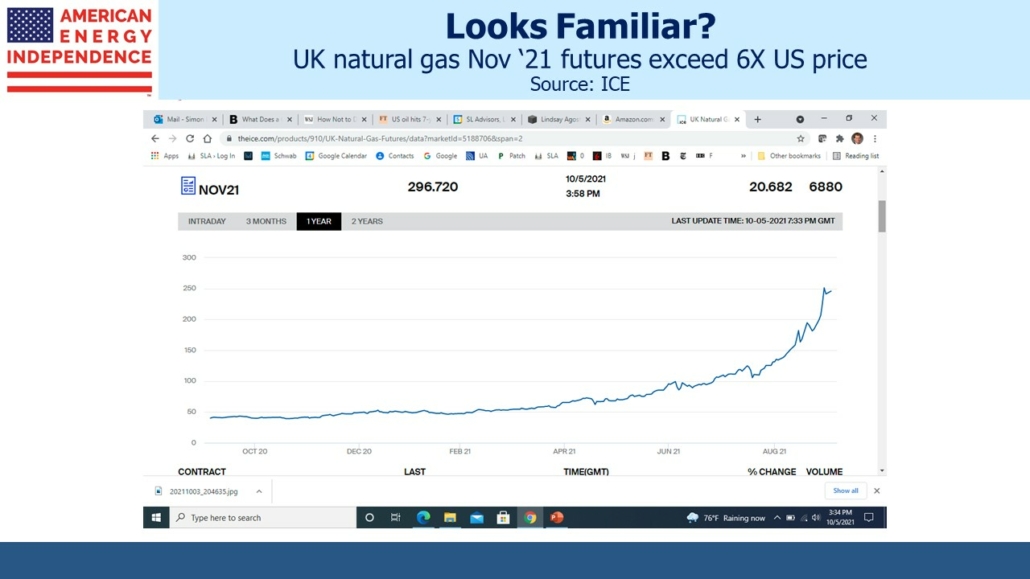 European natural gas prices continue to reach levels unfathomable in the US. Britain is the new poster child for a mis-managed energy transition, joining Germany and California as examples to avoid. British natural gas prices hit £3 per therm on Monday, the equivalent of $41 per MCF (versus around $6 in the US). The WSJ wrote How Not To Do An Energy Transition to offer some belated advice. Aramco noted that the natural gas crisis had driven oil demand up by 500K barrels per day, more than OPEC’s recently announced production increase.

Recent developments are highlighting the poor planning behind many countries’ headlong rush to renewables. It shows the problems of building policy on soundbites, instead of designing good policies that generate their own slogan. Lessons will be learned, including that the energy transition is far from costless. This should lead to a more thoughtful approach that acknowledges the vital role natural gas will continue to play in providing reliable power for decades to come. The wake-up call for policymakers is good news for energy investors. Electricity can’t be intermittent, and the UK government is paying a steep price for over-reliance on windpower without adequate back-up. 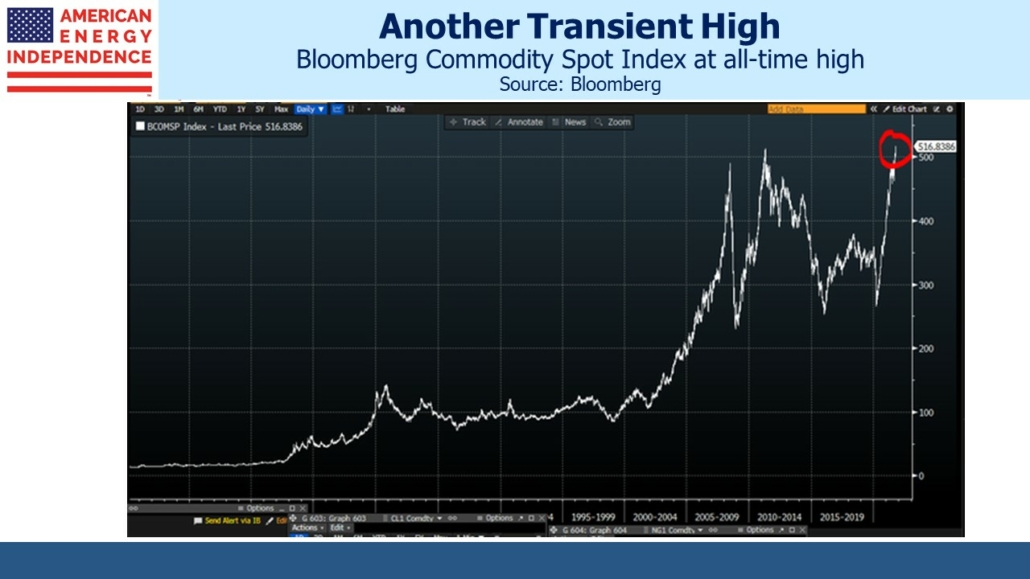 Natural gas is far from the only commodity in a bull market. The Bloomberg Commodity Index tracks 23 energy, metals and crop futures contracts. Even cotton, hardly a target of climate extremists, has rallied sharply in recent weeks. 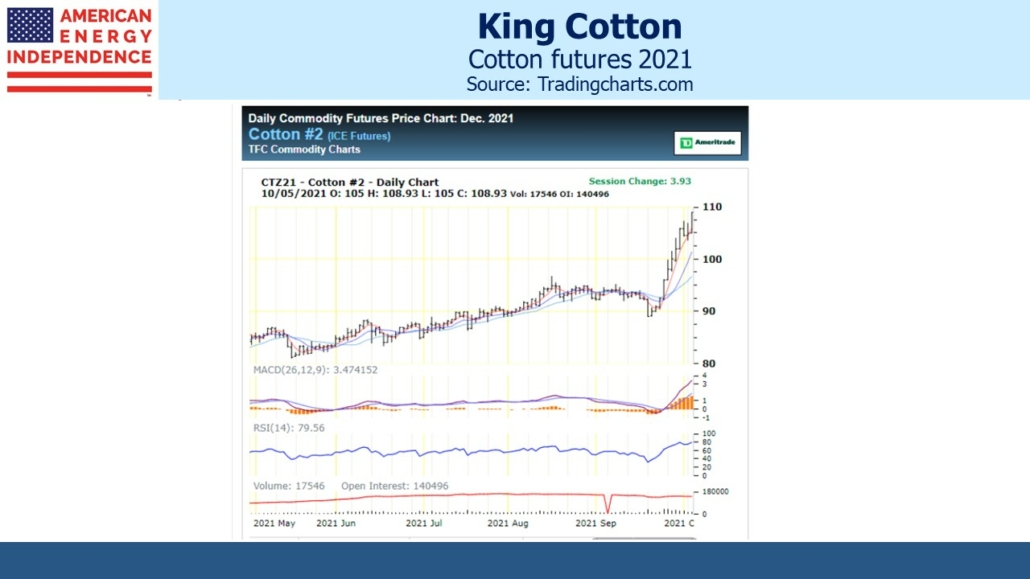 The inflationary implications of the energy transition were harder for the Fed to forecast than the impact of fiscal uber-stimulus and debt monetization. Rising energy prices offer a graceful exit from the Fed’s transitionary narrative around current inflation, should they choose it. The eurodollar futures curve is priced for a 0.70% increase in short term rates between December 2023 and 2025, a pace of slightly over one tightening per year. Although it’s widened from 0.55% over the past couple of weeks, it still represents an asymmetric bet, since even today’s dovish FOMC is more hawkish than the market. If inflation fails to return to its 2% FOMC target, the risk is for much more tightening in a couple of years than is reflected in current pricing.