Different Ways To Use Solar Power

As the world embraces more solar power, it turns out there are two competing visions – the traditional utility model of building solar farms for transmission to customers, and the distributed model where businesses and homes generate their own power using rooftop solar panels. One solution is likely to win, and today two highflying companies offer a sharply different way forward.

Nextera Energy (NEE), through its subsidiary Florida Power and Light (FPL), has 28 major solar plants generating almost 2 Gigawatts (GWs) of power, and plans to add 30 million solar panels (another 9 GW) over the next decade. 1 GW is conventionally believed capable of powering around 725,000 homes assuming constant load without peaks. Solar power is intermittent, but NEE is investing in battery storage too for when it’s not sunny in the sunshine state (such as at night and during hurricane season).

The FPL Manatee Energy Storage Center will have 409 megawatts of capacity (the equivalent of approximately 100 million iPhone batteries) when it begins operation late next year. NEE describes themselves as, “one of the world’s largest generators of clean, renewable wind energy, with the largest market share of North American wind capacity.” Solar was mentioned 27 times on NEE’s recent earnings call.

Tesla (TSLA) has a different vision that might well compete with NEE’s. TSLA’s $275BN market cap suggests that their electric vehicles will wipe out the traditional automakers. However, venture capitalist Chamath Palihapitiya believes that the bull story is built on TSLA’s energy business, which he notes is already profitable. TSLA offers residential customers solar panels with which to generate electricity, a battery (Powerwall) to store it, and software to manage the process. Palihapitiya believes part of TSLA’s upside lies in its ability to make every sunny home energy-independent.

It’s a compelling argument. While NEE is a leader in generating power from renewables, TSLA may lead to creative destruction of the wholesale-retail utility model that has existed almost as long as the commercial use of electricity. Solar is more likely than wind to adopt such a model – rooftop windmills seem implausible – and the sunny weather that solar farms rely on is also available to their residential customers. Utilities, with their high fixed costs and regulated pricing, are vulnerable to an erosion of their customer base, similar to the cord-cutting that has hurt cable TV providers. 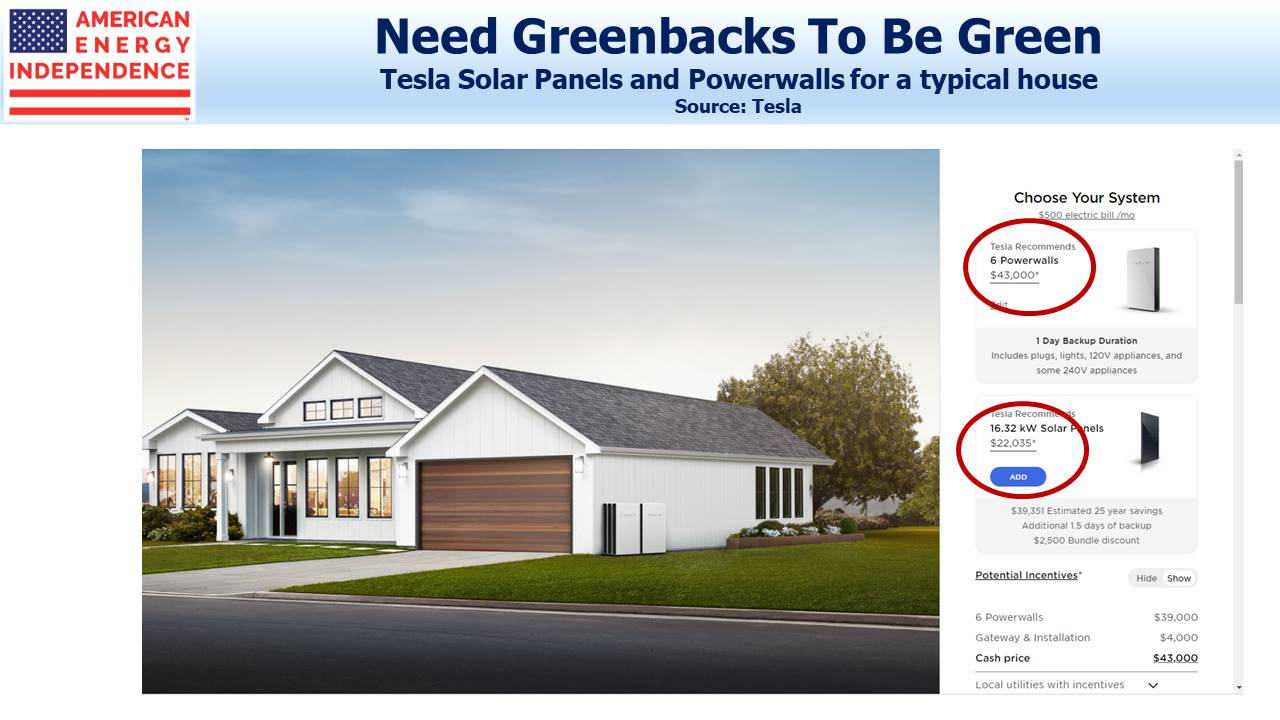 The solar devotee still needs TSLA’s Powerwall, which costs $7,167 per powerwall plus installation, to save that sunlight for the evening. Six powerwalls, costing $43K, would provide one day’s backup for a typical suburban home, on top of $22K for solar panels to charge the batteries. The solar purist would be carbon-free for $65K, plus the cost of installation.

Many homes in our neighborhood recently lost power, and the hum of generators seems more widespread than in the past. Solar panels,  plus a natural gas generator, offer the pragmatist green credentials, no intermittency, and more reliability than today’s fragile distribution infrastructure with its aboveground power lines strung from utility poles. A generator costs less than a fleet of powerwalls too. 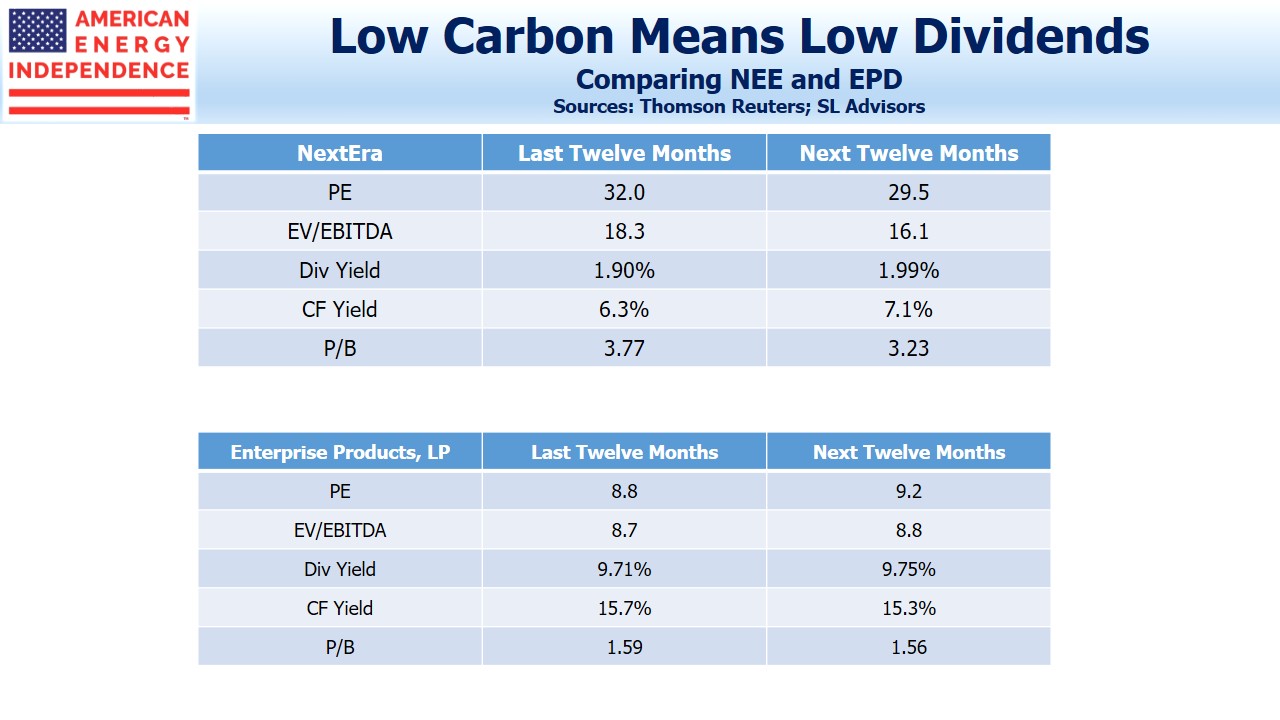 The way in which we’ll use the sun to generate power is not yet settled, and natural gas will continue to be the most important source. Enterprise Products Partners (EPD) delivers natural gas liquids (such as ethane) as a vital feedstock to the petrochemical industry. Regardless of the path energy markets take, plastics demand will keep rising, for which EPD is well positioned.