Devon Shows Occidental How To Buy

The merger between Devon (DVN) and WPX Energy (WPX) offers a marked contrast to Occidental’s (OXY) ill-fated acquisition of Anadarko. Synergies are coming from cost savings not revenue opportunities, a defensive move that will likely spur further consolidation. The annual savings of $575MM will cover the modest 2.6% premium paid by DVN in less than two months. OXY paid a 62% premium 18 months ago. 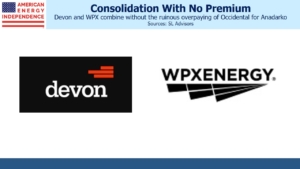 The new Devon’s dividend policy has been well received – by paying out half the excess Free Cash Flow (FCF) over the current dividend, it allows investors to model different oil price scenarios and their impact on the payout. It’s another acknowledgment that bringing energy back in favor requires greater financial discipline.

A Biden administration has vowed to cease issuing new permits for fracking on Federal land, a policy that would constrain DVN’s Permian output. States benefit from the associated economic activity – the labor involved in drilling, fracking, transportation of water and other inputs to and from the site all create local jobs. In addition, New Mexico for example, where DVN has much of its Permian acreage, receives a 20% royalty. The Biden campaign’s promise to curtail fracking plays well with the base but is unlikely to be popular closer to the regions affected.

Switching gears, society is adjusting to life with Covid, where data continues to show positive trends. New Jersey, population 9 million with the worst fatality rate of any U.S. state, has 421 Covid patients in hospital, down 95% from the peak in April. We spend hours poring over the data, reading and learning about it. As chronicled before, your blogger doesn’t want to get sick and follows mask/hygiene protocols. But we think the market’s rapid recovery reflects the data – vulnerability increases sharply with age and certain risk factors. For the vast majority it’s not fatal.

Anecdotes also inform – here are some of ours:

One good friend at serious risk because of pre-existing health issues endured an extremely mild case of “Covid toes” – chilblains and nothing more. Once it was clear he was not in danger, I applied one of Winston Churchill’s many great quotes to him. “There’s nothing more exhilarating than to be shot at and missed.”

Another friend, in his late 50s and fit with no obvious risk factors, spent four days in hospital on oxygen (but thankfully not on a ventilator). His entire family was infected when their son returned from college. He’s recovered, but doesn’t care to repeat the experience.

The head of Trauma at a local hospital recounted somberly what his life was like in March and April. He’d never seen x-rays and conditions like those that presented. He’s hopeful it’s under control, but also noted that substance abuse is up sharply. Self-quarantines and the stress of financial losses are creating mental health issues.

Another friend recounted how her daughter, at college in Colorado, has endured a series of self-quarantines. As soon as one finished, she was found to have been in contact with another infected person and had to do another two weeks. This has continued for a couple of months, and the daughter is showing signs of mental stress.

My wife is a teacher, and modified in-person classes require wearing a mask all day. Although there’s no evidence than extended mask wearing causes any harm through oxygen deprivation, and it’s routine for health care workers, working with a mask on permanently is a lousy way to spend your day.

Then there’s the older woman in North Carolina who was sufficiently fearful of infection that she insisted her landscapers wear booties over their shoes. She brought home a case of diet coke, and out of an abundance of caution decided to sterilize the cans by placing them in her dishwasher. Well into the dishwasher cycle she was awoken in bed by a series of loud explosions, as the hot water ruptured the soda cans. Convinced her house was under attack, she alerted her neighbors.

Very little attention is being paid to the human and financial costs of mitigation, but we suspect that when a final reckoning is done it’ll be clear that cost-benefit analysis was completely absent.