The expression “like sending coals to Newcastle” can be traced back to the 17th century, reflecting the insight that whatever else Newcastle needed in those days did not include coal. This windswept port on the North Sea was conveniently located near some of the biggest coalfields of northern England. During its heyday, American trader Timothy Dexter defied common sense and sent a shipment of coal to Newcastle, causing anticipation of a substantial loss. However, perhaps by luck he had the good fortune for his cargo to arrive during a miners strike, thereby profiting from unusual and temporary demand. Coal exports have long since ceased along with local coal production. Today’s Newcastle possesses little of note beyond an English football stadium with capacity well in excess of their local team’s ability (they were just relegated from the Premier League). Meanwhile, Newcastle in the Australian state of New South Wales has become the world’s most prolific coal exporting port. 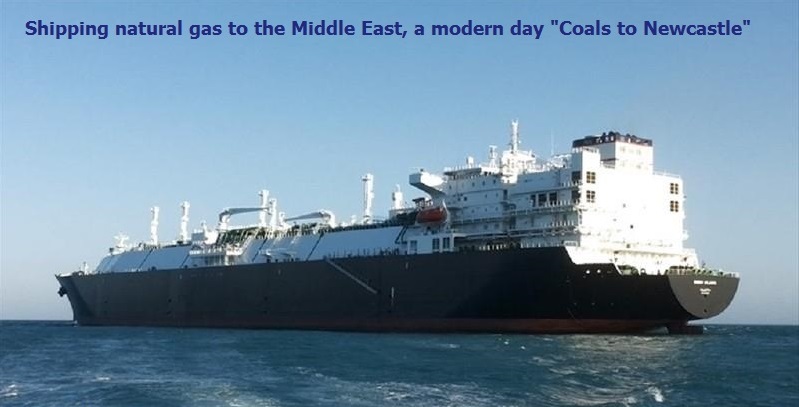 LNG to the UAE doesn’t quite roll off the tongue as easily as Coals to Newcastle, but it might be a modern-day equivalent. The Middle East has 2.8 quadrillion cubic feet of proved natural gas reserves, enough to meet current global demand for 23 years. OPEC reports that the United Arab Emirates (UAE) holds around 10% of this. And yet, earlier this year the Energy Atlantic LNG tanker unloaded 3.38 BCF (Billion Cubic Feet) of natural gas at the port of Jebel Ali, near Dubai, following an almost seven week journey from the Sabine Pass LNG terminal in Louisiana.

Somehow the power of economics (see Why the Shale Revolution Could Only Happen in America) has overwhelmed the logic of geographic proximity to make such a delivery commercially reasonable in spite of abundant local resources. To show this was no fluke, more recently the Creole Spirit unloaded a similar amount in Kuwait, also sourced from Sabine Pass. The region hasn’t developed sufficient energy infrastructure to properly exploit its resource domestically.

The story of America’s Shale Revolution was built on the single-minded pursuit of unconventional fracking technology by many independent exploration and production (E&P) companies as well as some extraordinary chutzpah by a few. The Frackers by Greg Zuckerman memorably tells the story of some of them. Cheniere Energy (LNG) under then-President Charif Souki was once intent on importing LNG into the U.S. to take advantage of relatively high domestic prices. Cooling natural gas to a near-liquid state (at -260° F) so it can be moved in a condensed form by ship requires a substantial investment (i.e. US$BNs) to create such a facility, as does the construction of a regasification plant on the receiving end. Souki’s career wasn’t obviously suited to leading Cheniere on this journey, having been primarily focused on raising money for banking clients in his native Lebanon and elsewhere in the Middle East. His past also included a stint as restaurant owner of Mezzaluna, the now infamous Los Angeles eatery where Nicole Simpson ate her last meal on June 12, 1994 before being slain by O.J. Simpson (ahem…allegedly).

Undaunted by the absence of any relevant experience, as President of Cheniere Souki set out to use his former banking ties to finance their new business. The Shale Revolution led to a collapse in domestic natural gas prices and turned the economics upside down, causing Cheniere to turn from prospective LNG importer to exporter.

The facility that can regassify LNG for normal use is not the same one that can liquify it for long distance transport. Converting an LNG import facility to an export one is not the same as reversing a pipeline, and many more $Billions were required for Cheniere to be ready for business. Just as export operations began, Souki was pushed out by its board of directors which included Carl Icahn. The boss’s substantial risk appetite was by now well known, but his latest plan to add a gas trading business was a risk too far for investors who could finally see actual cashflows on the horizon. Souki’s compensation over the years had matched his ego, but recognizing that his risk appetite didn’t match ours we have never invested in Cheniere.

The Sabine Pass facility began exporting late last year and is eventually expected to handle 3.8BCF per day. Some of its supply travels from the Marcellus shale in Pennsylvania along the Transco pipeline network owned by Williams Companies (WMB), in which we are invested. A few weeks ago I had the opportunity to be presenting in Laceyville, Pennsylvania to a group that included landowners receiving royalty checks from the production of natural gas under their property. As we noted last week, few countries assign mineral rights to the owner of the land beneath which they sit.

For just a moment, step away from the prosaic question of the market’s near term direction and consider this: an Egyptian-born Lebanese former restaurant owner raised $Billions to export liquefied natural gas over 11,000 miles to a region of the world whose wealth is totally reliant on hydrocarbons. It couldn’t have happened anywhere else, except America.

We are invested in WMB