Why aren’t MLPs performing better given the fundamentals? On valuation, they should be compelling. Using EV/EBITDA (Enterprise Value /Earnings Before Interest, Taxes, Depreciation and Amortization), they are virtually on top of utilities, a point not reached either in 2008 or 2016.

Typically, MLPs are valued at a higher multiple. Although like utilities, they depreciate their assets, unlike power plants, pipelines buried underground typically appreciate, since their cashflows grow. They also have more flexibility in their customer base, since a pipeline can move hydrocarbons from anywhere that’s connected by the network. The customer base of a utility is geographically fixed. And EBITDA generated by a utility is subject to taxes, whereas MLPs don’t pay tax. For all of these reasons, EV/EBITDA multiples for MLPs are usually higher. Consequently, when relative valuations approached one another as they have twice briefly in the past decade, a sharp recovery in MLPs followed. 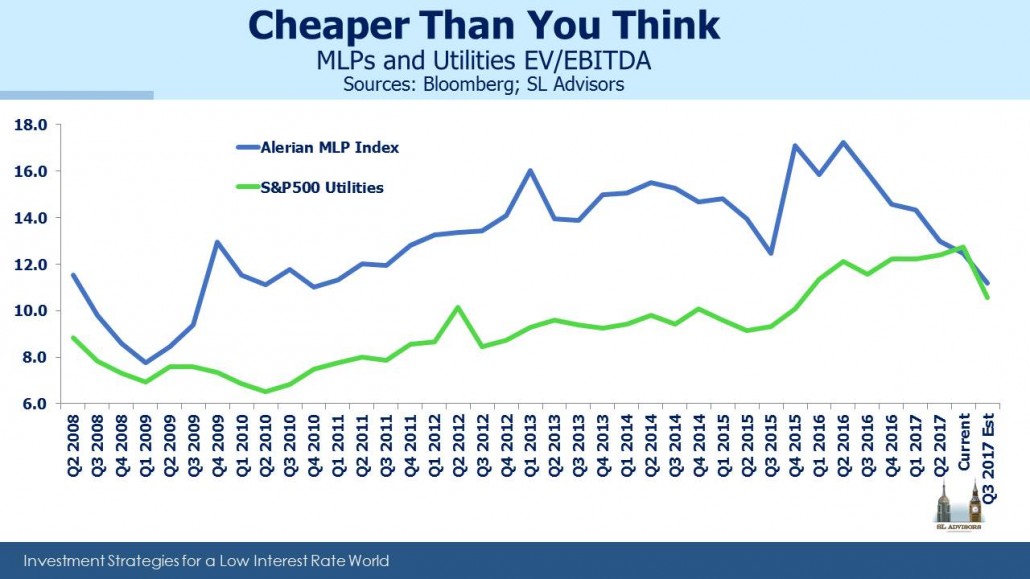 The yield on the Alerian MLP Index is currently 7.8%, 5.6% above the ten year treasury and substantially wider than the 15 year average of 3.5%. Moreover, MLP debt is performing far better than their equities, suggesting no particular financial distress.

2Q17 earnings were largely uneventful, with the dramatic exception of Plains All American (PAGP) which warned of a likely distribution cut (see MLP Investors Learn About Logistics). Management teams report that business is fine, cashflows growing and product moving. At some point in the next year we’re likely to see U.S. crude oil production exceed 10 Million Barrels per Day, a record last seen in November 1970. Yet MLPs fall when crude prices are weak and seem indifferent when they rise. What is going on?

MLP investors originally signed up for high, stable distributions with modest growth and not much excitement. The widely-hated K-1s provide a useful tax deferral for those willing to hand them off to an accountant. The tax benefit accumulates over time, creating a powerful incentive to delay selling which would make the tax bill come due. Some MLP investors really do hold forever, or at least their lifetimes, leaving their heirs to benefit from a stepped-up cost basis that wipes the tax slate clean. In a world of trigger-happy equity analysis with a relentless focus on the next few days or hours, MLP investors are what every company says they want: in for the long term.

There is increasing evidence that this stable investor base has been turning over. The Shale Revolution created the need for more infrastructure to support America’s drive to energy independence. It’s a truly exciting story that exemplifies much that is great about the U.S. (see Why the Shale Revolution Could Only Happen in America). But quite a few managements in their drive to seize the ensuing growth opportunities have imposed an unwelcome financial model on their loyal investor base. Stable distributions with low growth were put at risk with increased leverage seeking faster growth. The result, as Kinder Morgan showed, was that the MLP structure doesn’t work if you’re big and need to fund large capital projects.

The consequence for Kinder Morgan Partners (KMP) investors was an unwelcome tax bill as their units were absorbed by Kinder Morgan Inc. (KMI), and ultimately two dividend cuts. KMI recently announced they’ll be raising their dividend next year, since their backlog of new projects is a fraction of what it was three years ago and so they have more cash available to resume higher payouts (see What Kinder Morgan Tells Us About MLPs). But the psychological damage to KMP investors has been done. Every financial advisor I talk to has some clients who owned KMP and were effectively betrayed. They never signed up for higher leverage in search of faster growth, but the stewards of their capital decided for them. The experience has made many long-time MLP investors wary of being seduced by valuations into committing new capital.

KMI was only the first. Other companies, including Targa Resources (TRGP), Plains All American (PAGP), Oneok (OKE), Williams Companies (WMB) and Energy Transfer (ETP) have undertaken various types of structural simplification. In every case, it was a result of growth that strained balance sheets and it ultimately led to a cut (sometimes two) in distributions to MLP investors, an unwelcome tax bill or both. PAGP warned of an impending second distribution cut earlier in the month. The most loyal investors in the public equity markets have had their trust abused by management teams whose choices ultimately risked the stable payouts their clients had always sought. Although no reliable figures exist on this topic, several MLP executives have admitted to substantial turnover in their investor base in recent years. Income seeking investors did not sign up for this. The 58.2% drop in the Alerian Index from August 2014 to February 2016 remains a recent, highly unpleasant memory. When combined with multiple cases of broken distribution promises, many long-time MLP holders feel abandoned. The investor base is changing.

That is what is creating the current valuation opportunity. Today’s investors in energy infrastructure like the yields but are also fine with cash being reinvested back in the business, something MLPs did on a much smaller scale in the old days. Recent buyers recognize the opportunities to grow cashflows through enhancing existing assets and building new ones at attractive IRRs. The Shale Revolution is a tremendous opportunity for energy infrastructure businesses to generate stable and growing cashflows for many years ahead. But financially, getting there has been highly disruptive for an investor base originally not much concerned with growth. This transition from one type of investor to another isn’t happening smoothly, but it’s happening.  Valuation discrepancies such as the EV/EBITDA comparison with Utilities won’t last forever.