Recently Pembina and TC Energy announced a joint venture for Carbon Capture and Sequestration (CCS), aimed at CO2 emissions generated from Canada’s tar sands oil extraction activities. Canada has an ambivalent stance on climate change policies. Like all signatories to the Paris Accord, they claim to have set aggressive targets for emissions reductions. Canada also has a carbon tax, a sensible measure to place a price on emissions that has little support in the US.

But Canadians also have one of the highest per capita rates of energy consumption in the world – almost a third higher than Americans, who are often regarded as the world’s energy gluttons. A Canadian’s emissions are about the same as an American’s, because of their greater access to hydropower. But Canada’s emissions have been stable, not falling as in the US where coal to natural gas switching has been the main source of reductions in the past decade. 2020 emissions fell everywhere because of lockdowns, but are rebounding.

Part of Canada’s struggle with emissions is a result of its long winters. But tar sands oil production is another. This is an energy-intensive process that involves heating bitumen with natural gas to separate out the crude oil. It’s fair to say that Albertan energy workers are less concerned about climate change than their liberal neighbors in Ontario and Quebec, even though western Canada supplies eastern provinces and generates substantial tax revenues.

Images of tar sands production facilities were sufficiently emotive to sustain extremist opposition to the proposed Keystone XL pipeline for a decade, until Biden finally killed it off last month.

Canada will continue to produce oil from tar sands, even though transportation to market has become a chronic problem. Its crude will move by rail, instead of cheaper and safer pipelines. But the Canadians recognize they have an image problem, hence the recent announcement on carbon capture.

The Alberta Carbon Grid (ACG) will initially capture CO2 generated from the extraction of crude from tar sands. But there are also plans to connect with areas of industry elsewhere in the province and to power plants as well. It will use existing oil pipelines that will be retrofitted to transport CO2, and will add new infrastructure on to it.

Estimates are that the initial system will capture and sequester underground 60-80,000 metric tonnes (hereafter “tons”) of CO2 daily. One advantage of Canada’s cool climate is that it’s easier to inject the CO2 underground into porous rock when daytime summer highs are typically in the 60s. The JV has identified an underground reservoir near Saskatchewan with capacity to eventually store over 2 Gigatons of CO2, which will take several decades to fill.

The projected annual volumes equate to around 4% of Canada’s total 2019 CO2 emissions of 730 tons, which seems quite impressive for a single project. By contrast, Exxon Mobil’s planned CCS in Texas is projected to sequester 50 million tons annually beneath the Gulf of Mexico. This is 60% bigger than the ACG but less than 1% of US 2019 emissions. 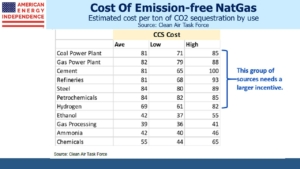 CCS is drawing more attention. Its appeal to the fossil fuel industry is that it offers a way to continue today’s energy mix while reducing emissions. Climate extremists oppose such thinking because they’re passionate about a world of solar panels and windmills. But when you work through the math, the cost of capturing all the CO2 emitted from the combustion of natural gas is not an insurmountable figure. Its implementation is also much more plausible than carpeting the landscape with intermittent renewables along with the extensive high voltage power lines required to move it from rural areas to population centers. Massachusetts can’t even buy hydro-electric power from Quebec because New Hampshire won’t allow the necessary power lines to be built in their state.

The tax code already pays a $50 per ton credit for permanently sequestered CO2. The Clean Air Task force thinks it should be higher, and has estimated the cost of capturing CO2 from different sources – ranging from as little as $39 per ton for CO2 produced in gas processing to $100 per ton in cement production. Industrial emissions with more concentrated CO2 allow for cheaper separation of the CO2. 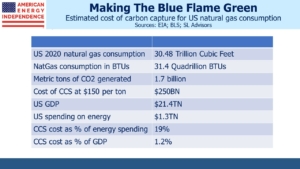 The table shows that even at a substantially higher cost of $150 per ton, the CO2 emitted from burning natural gas could be captured with an increase in our overall energy spend of less than 20%. A new CCS industry would create jobs just as the president promises ramping up renewables would. Anyone truly worried about global warming and not simply proselytizing for renewables would surely embrace this as worth the cost.

The energy transition is about economics, not technology. The solutions are mostly known. Costs can be reduced through scale and innovation continues, but it’s about society’s willingness to pay for the cost. The point of the table is not to try and persuade climate extremists, but to show that substantial emissions reductions are possible without our power supply failing us when most needed, as in California for example.

Today’s energy companies have a lot riding on the outcome, which is why CCS is gaining more attention. As their solutions become more visible, the sector will continue its recovery.