Sentiment among energy investors remains poor. The S&P E&P ETF (XOP) is -21% for the year. Energy has sunk to 4% of the S&P500. The Alerian MLP Infrastructure index (AMZIX) is -3% YTD and reached a low of 44% off its August 2014 high last week. This contrasts with the S&P500, which is +26% for the year. MLP tax loss selling has caused further downward pressure, since so many investors have realized gains in other sectors to pair against energy losses.

Although energy has been weak, wide performance divergences exist. Midstream energy infrastructure has done far better than the E&P companies that are its principal customers. Within that, pipeline corporations have done better than MLPs, which continue to suffer from erosion of interest among their traditional income-seeking investor base. Canadian corporations are among the best performers. TC Energy (TRP, formerly Transcanada), is +50% for the year including dividends, even handily beating the S&P500 with its 26% gain.  Few investors in midstream energy infrastructure realize how well TRP has performed, unless they own it. Enbridge (ENB), North America’s biggest midstream energy infrastructure company and also Canadian, is +31%. Pembina (PBA), a less well known Canadian pipeline company, is +27%. 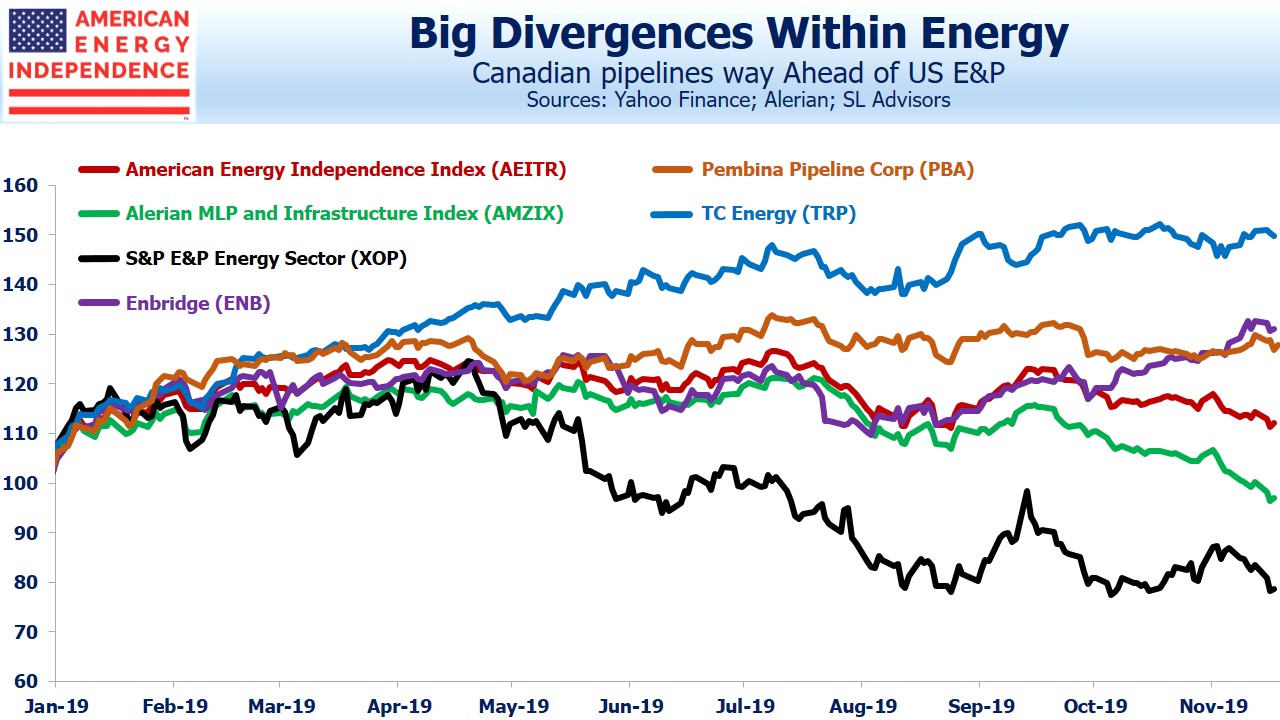 Like their banks, Canadians pipeline companies tend to be run more conservatively. Over the past five years they’ve also set themselves apart from the rest of the sector. Their U.S. cousins would do well to adopt some of their disciplined capital allocation and prudent management practices. These three companies represent 55% of the 2019 Free Cash Flow (FCF) we project for the industry. Their performance supports the case that growing FCF leads to a higher stock price (see The Coming Pipeline Cash Gusher). 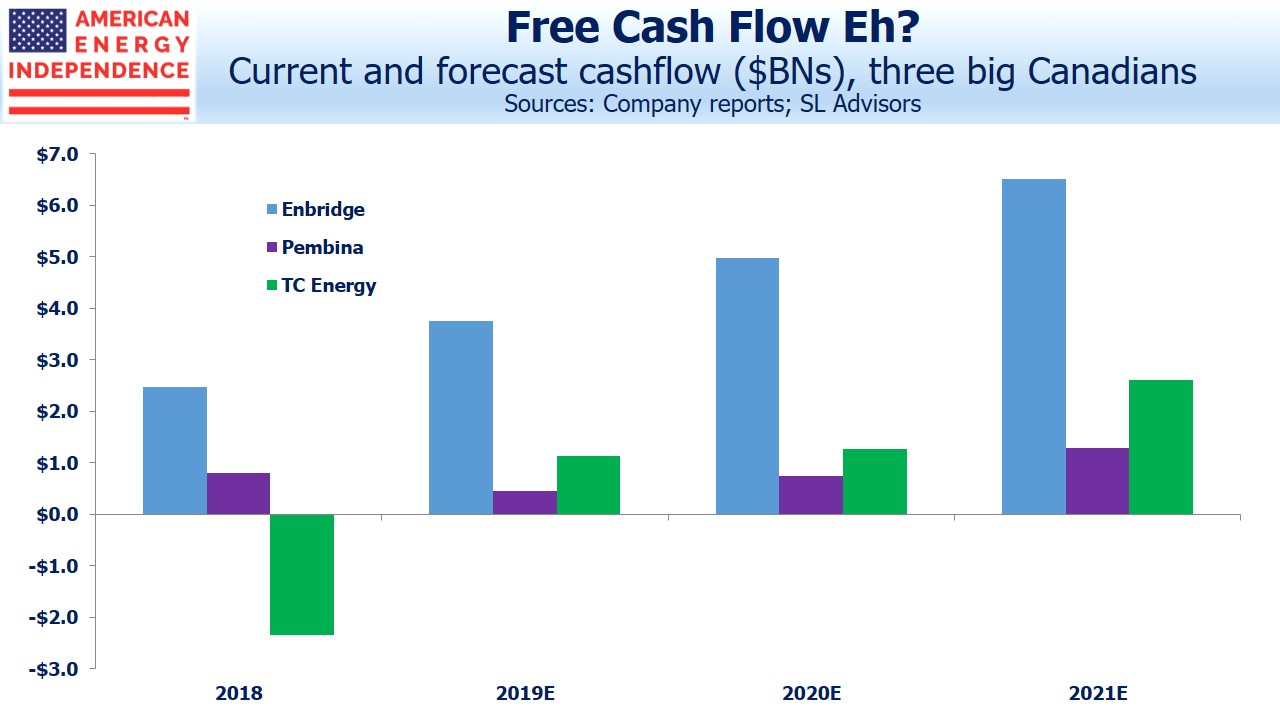 The Alerian MLP ETF (AMLP) is a rich source of opprobrium on this blog, because of its flawed tax structure (see MLP Funds Made for Uncle Sam). It does retain one useful feature though, in that it’s relatively easy to short. Big pipeline companies are under-represented in the Alerian index, because most of them are not MLPs. So AMZIX is stuffed full of what investors don’t want.  AMLP follows AMZIX, albeit from a distance. Because of its structure, since inception performance of 1.6% is only half its benchmark of 3.2%. AMLP is the worst performing passive index fund in history. This year AMZIX is 15% behind the investable American Energy Independence Index (AEITR), which is 80% corporations, including the abovementioned Canadians. 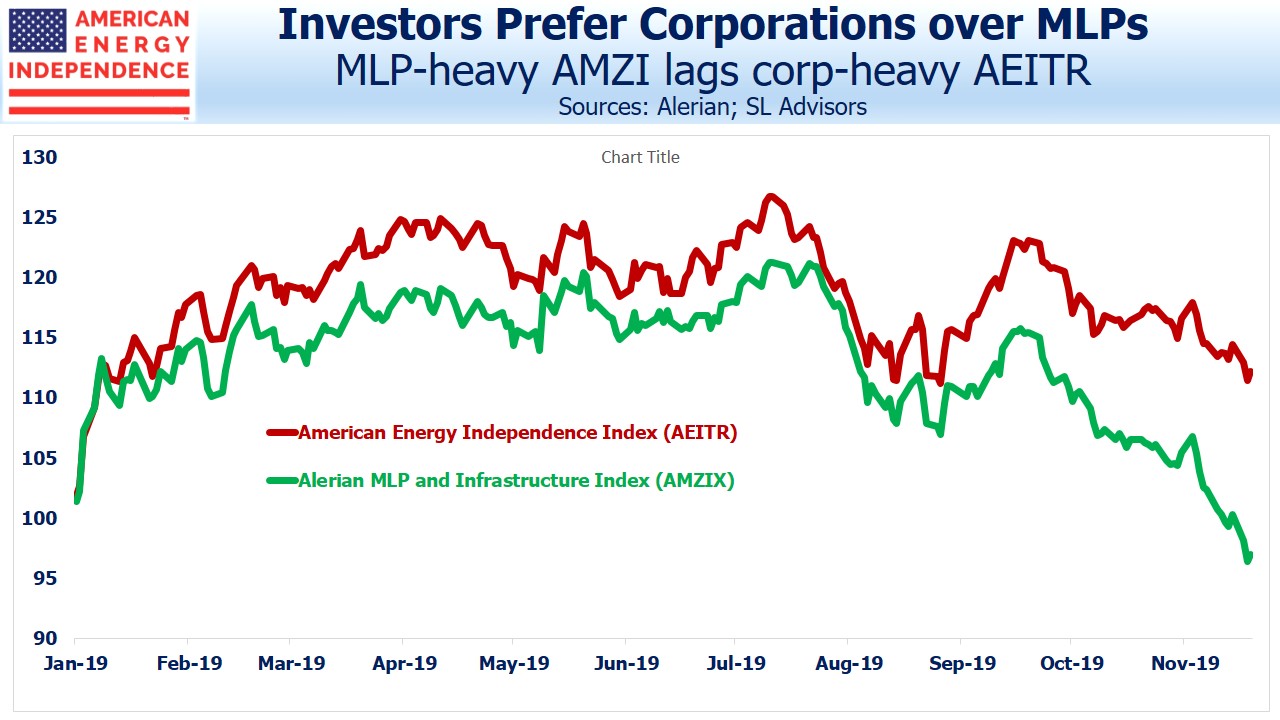 Comparing the two indices, one can see the recent sharp divergence in performance, which was probably exacerbated by tax-loss selling of MLPs. Short AMLP and long an AEITR-linked security has been a profitable trade. AMLP’s tax drag hurts in a rising market, where its flawed structure impedes its ability to appreciate with its underlying portfolio. But recent weakness has been led by the MLPs that predominate in AMLP, highlighting the importance of being in the right kinds of companies in this sector. Investors are favoring well-run Canadian pipeline corporations and shunning MLPs.

The Canadian pipelines offer powerful evidence that it’s possible to generate steady returns in this business. Those U.S. companies that perform well over the next couple of years will do so by adopting more of their culture from north of the border. Assuming FCF grows as we expect across the sector, performance of the Canadian stocks suggests positive returns should follow.

We are invested in ENB, PBA and TRP. We are short AMLP

We manage an ETF which tracks the American Energy Independence Index