Like Warren Buffett’s legions of followers, we enjoy reading his annual letter. He writes as clearly as he thinks. Buffett’s also a great interviewee, and his TV appearances with Becky Quick on CNBC are engaging – although it’s quicker and almost as illuminating to read the transcript.

Buffett is quick to admit mistakes, which simply highlight how few he makes. Overpaying for Kraft was a recent, big one. The company was combined with Heinz in 2015, creating Kraft Heinz Corp (KHC). Berkshire (BRK), in partnership with Brazilian investment firm 3G, had taken Heinz private two years earlier. Buffett still thinks it’s a great business, but what caught our attention was his comment on brand erosion. In Buffett’s own words, from his CNBC interview:

“Heinz was started in 1869. So it had all that time to develop various products, particularly ketchup, things like that.

“They’ve been distributed worldwide through tens and hundreds of thousands of outlets. They’ve had hundreds of millions…they spend a fortune on advertising. And their sales now are $26 billion. Costco introduced the Kirkland brand in 1992, 27 years ago, and that brand did $39 billion last year whereas all the Kraft and Heinz brands did 27– $26 or $27 billion. So here they are, a hundred years plus, tons of advertising, built into people’s habits and everything else, and now Kirkland, a private label brand, comes along and with only 750 or so outlets does 50% more business than all the Kraft Heinz brands. So house brands, private label, is getting stronger.”

Part of Buffett’s success has been improving upon the Graham and Dodd principles that defined his formative investing years. He recognized that demanding a discount to intrinsic value overlooks the intangible value of brand. His 1988 purchase of shares in Coke (KO) was an early example of this. KO currently trades at 11X book value. Their consistently high return on equity supports this high multiple. The brand is KO’s “moat”, generating far more profit than an unbranded carbonated, sugary beverage would.

Kraft Heinz has iconic brands too, but they’ve turned out to be more vulnerable to low cost competition than many expected. Buffett’s overpayment for the Kraft Heinz combination was in some ways caused by the enduring success of the Coca Cola brand. 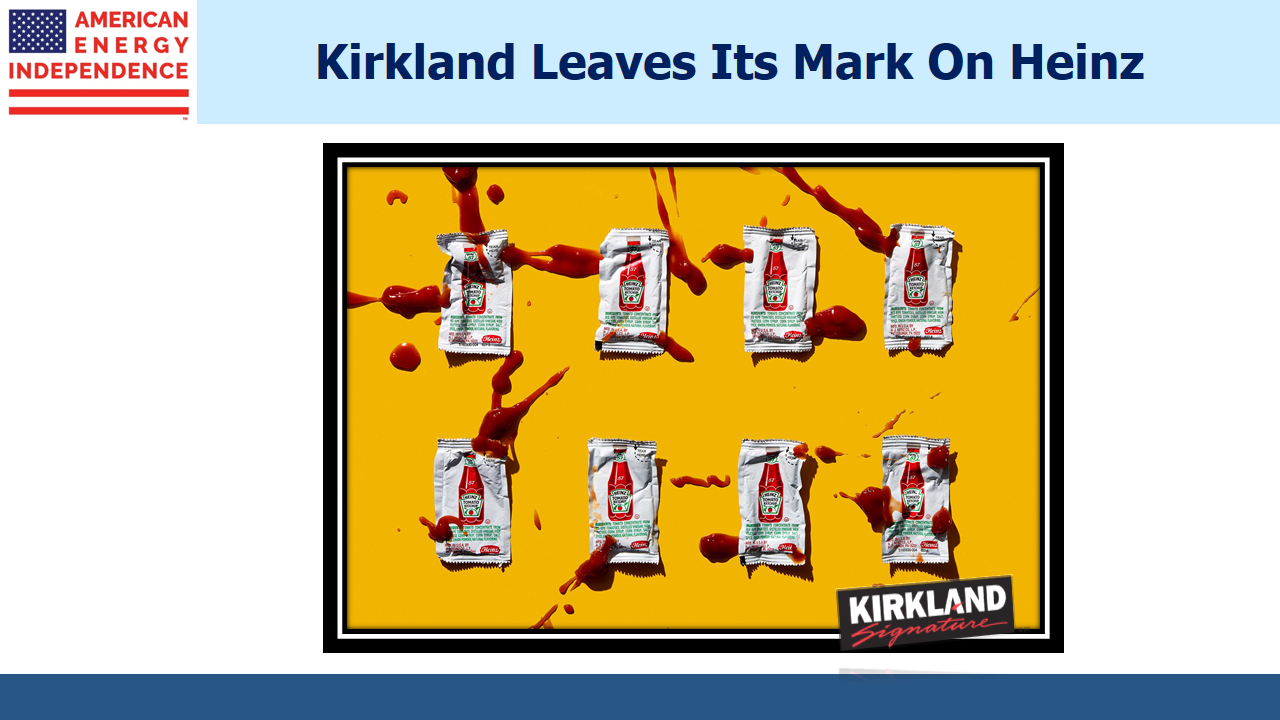 “Now, the interesting thing about Kraft Heinz is that it’s still a wonderful business in that it uses about $7 billion of tangible assets and earns $6 billion pretax on that. So on the assets required to run the business, $7 billion– they earn $6 billion– roughly after depreciation pretax. But we and certain predecessors, but primarily we, we paid $100 billion more than the tangible assets. So for us, it has to earn on $107 billion, not just on the $7 billion that the business employs.”

KO has unrivaled distribution — think of all the places you see bottles of Coke on sale. And tastes are shifting away from some KHC products, such as Oscar Meyer hot dogs which countless households ban because they regard as containing carcinogens. But the broad success of Costco’s Kirkland shows that brands can be more vulnerable than previously thought.

3G’s reputation for aggressive cost cutting led some to suggest they’d damaged the KHC brands. But Buffett noted that cuts were mostly overhead, “… they cut costs not in innovation, or in product quality, or anything like that. They just took it out of SG&A basically.”

The erosion of KHC’s brand value reflects the growing power of WalMart, Costco and Amazon. It didn’t just happen during the 4Q18 period for which KHC took its write-down, but the issue just gained more attention. It’s probably altered Buffett’s thinking too. Moats need to be harder to breach.

Energy infrastructure is one sector that’s invulnerable to brand erosion from new competitors, which ought to make it appealing to Buffett. An installed pipeline is unlikely to be threatened by a new one. Tomorrow’s winners in this sector will come from today’s big firms.

Climate change is the big uncertainty hanging over oil and gas pipelines. Buffett believes electric vehicles are, “…very much in America’s future.” While the energy sector grapples with the consequences of these shifts, U.S. energy infrastructure enjoys three benefits:

U.S. energy infrastructure has an enviable moat. Rising dividends, for the first time since 2014, are drawing new investors.

We are invested in KHC.