Today is Boxing Day. The US is rare among English-speaking countries in not celebrating the day following Christmas. Perhaps the habit was dropped following the War of Independence in a further shedding of the colonial yoke.

Our family continues to enjoy Boxing Day even after nearly 40 years in the US. It is in truth another day to over-indulge, including of Christmas pudding. This is a dark, heavy type of fruit cake liberally fortified with brandy and best served hot, with heavy cream. Americans know it as plum pudding, although it contains no plums.

English Christmas dinner of turkey and all the trimmings is only complete following dessert. Because a Christmas pudding is never as big as it looks, what appears to be a generous quarter slice presents as Scrooge-like by the time it reaches your plate. My opportunities to enjoy it are limited by my wife, who proclaims the ingredients (notably suet, which is fat derived from beef or mutton) deeply unhealthy which is of course why it tastes so good. Because the alcohol greatly extends its shelf-life Christmas pudding can, and often is, made months ahead of time. My grandmother used to make it in September, and once as a special treat served me one in May left over from Christmas. 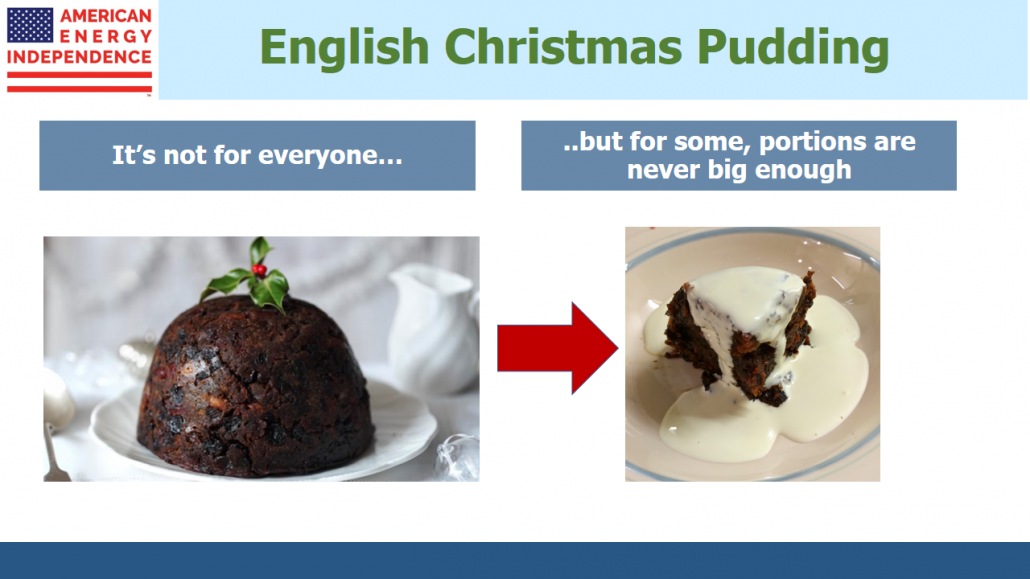 This history, along with what the uninitiated hold is an unappetizing appearance, has convinced my children to steadfastly reject even a small portion. This is fine with me, not least because my wife’s reported desire to have me around for a good many more years limits the amount available. One consequence is that I offer it to our guests sotto voce with easily constrained enthusiasm while noting how good the chocolate cake looks. At such times my mother’s hearing becomes temporarily acute, and she claims my anticipated second slice. I’m told Christmas pudding is very hard to get, but I suspect if I did the holiday food shopping I’d find it in abundance.

Last week my wife, whose care for my general well-being is only exceeded by her love of a bargain, let me know she just bought two Christmas puddings on sale. She’ll keep them for next year.

Friends often ask me about the history of Boxing Day. Since servants had to work to make Christmas Day memorable for the household, Boxing Day was when they received a Christmas “box” (gift of money) and enjoyed their Christmas feast downstairs. Watch the Downton Abbey Christmas special sometime. For generations the English have coped without household staff, so Boxing Day has served to extend Christmas into a second day.

Omicron is thankfully little more than a minor inconvenience and has not been allowed to interupt proceedings, although some games will inevitably be postponed while infected players self-isolate.  Nonetheless, for just over a week the choice of games to watch seems limitless.

For energy investors this has been a good year, by some measures the best in a decade. Because of this I reached Christmas, already one of my favorite times, in a thoroughly agreeable disposition.

Which is why on this Boxing Day, if your blogger can procure an extra slice of Christmas pudding while watching Arsenal win their first game of the hectic nine-day schedule, it will cap a Christmas as perfect as can be. Encouragingly, their opponents Norwich City languish at the very bottom of the table.

Boxing Day aside, I expect happiness from investing in 2022 will easily exceed the ephemeral pleasures offered by Arsenal and the Christmas repast. If so, few will complain.