The mood at the 2019 Midstream Energy Infrastructure Conference was noticeably more positive than in the past couple of years. Perhaps relocating from Orlando to Las Vegas helped. Hope for positive financial outcomes is in the local DNA, and pipeline investors could smugly remind themselves that the best odds were not in the casino. Attendance seemed to be higher than in the recent past, and demand for one-on-one meetings with management teams (the point of attending for many, including ourselves) was reportedly up sharply.

Investors keep pounding away on planned growth capex, and companies are generally responding by guiding to less spending this year and next while still emphasizing their slate of attractive opportunities. We checked our assumptions underlying The Coming Pipeline Cash Gusher in several meetings and still see a substantial jump in industry free cash flow over the next three years.

New pipelines are becoming harder to build. New York recently blocked a natural gas pipeline planned by Williams Companies (WMB) because of environmental concerns, although WMB plans to reapply. Canada is becoming a more difficult and expensive place in which to build (other than in oil-rich Alberta). Enbridge (ENB) went as far as to say they wouldn’t attempt a new, greenfield crude oil pipeline in Canada. They regard the permitting process as capricious, hijacked by a small minority of vocal environmental activists that don’t reflect the public interest.

Impeding new construction simply increases the value of the existing asset base. It also means that today’s dominant firms will maintain their market positions in the future; this is not an industry where a disruptive start-up has realistic prospects.

It also creates an unusual alignment of interests between anti-fossil fuel, environmental activists and investors who are clamoring for a greater return of cash to owners. Both are opposed to new spending, albeit for different reasons.

Incidentally, in a panel on LNG, Andy Orekar of Gaslog Partners said that if all the world’s shipping converted to LNG (because of the impending IMO 2020 standards on maritime emissions) it would consume more than all of the current trade in LNG. Currently, gas-powered ships are limited to LNG tankers that consume a small portion of their cargo for power. It’s a theoretical point since the industry is installing sulfur scrubbers and switching to cleaner crude oil-based fuels, but an interesting one nonetheless.

Today the U.S. exports around 4 BCF/D. Because natural gas is an inevitable byproduct of crude production in the Permian, TELL expects the economics of oil to drive more gas output which will need to be sent somewhere. They believe the Permian may produce as much as 30BCF/D, creating a need for almost all proposed LNG projects. Increased domestic consumption and pipeline exports to Mexico will only soak up so much, with seaborne LNG exports being critical to avoid constraints on crude production. Flaring unwanted natural gas is limited, and the larger companies that are now dominating Permian activity are especially likely to avoid the negative publicity associated with such obvious waste.

Private equity has developed into an alternative source of financing for midstream infrastructure since public market valuations essentially render equity financing prohibitive. This highlights the contrast between how public and private markets view the sector. Although private funds can compete effectively for projects, it’s also made exits harder, leading to longer holding periods that can reduce returns. The traditional arbitrage, in which public buyers acquire assets at higher multiples than paid by private equity, is currently being reversed. This reflects the continued public market wariness of midstream energy infrastructure, and highlights currently attractive valuations.

Most firms now have a set of policies covering ESG (Environmental, Social and Governance). This is regarded by some as a requirement for drawing in generalist investor interest. One company noted that European investors were more likely to use ESG as a screening metric, and reported that they had seen a notable pick up in interest from non-traditional investors in response to their adopting ESG policies. Mentioning Energy Transfer (ET) in the context of ESG invariably draws a chuckle (see Why Energy Transfer Can’t Get Respect)

A meeting with Enterprise Products Partners (EPD) produced some useful insights. They regard U.S. crude oil export infrastructure as still catching up with volumes. Building a facility to accommodate Very Large Crude Carriers (VLCC) is an important objective for them. The application to build this terminal was 13,000 pages and weighed 100 lbs.

EPD also sees very strong Chinese demand for U.S. exports of ethane and propane, with the current trade dispute not regarded as a long-term problem.

The “War on Plastics” led them to point out the slide shown below, which highlights how much of global plastics pollution can be traced back to ineffective disposal among some Asian countries. 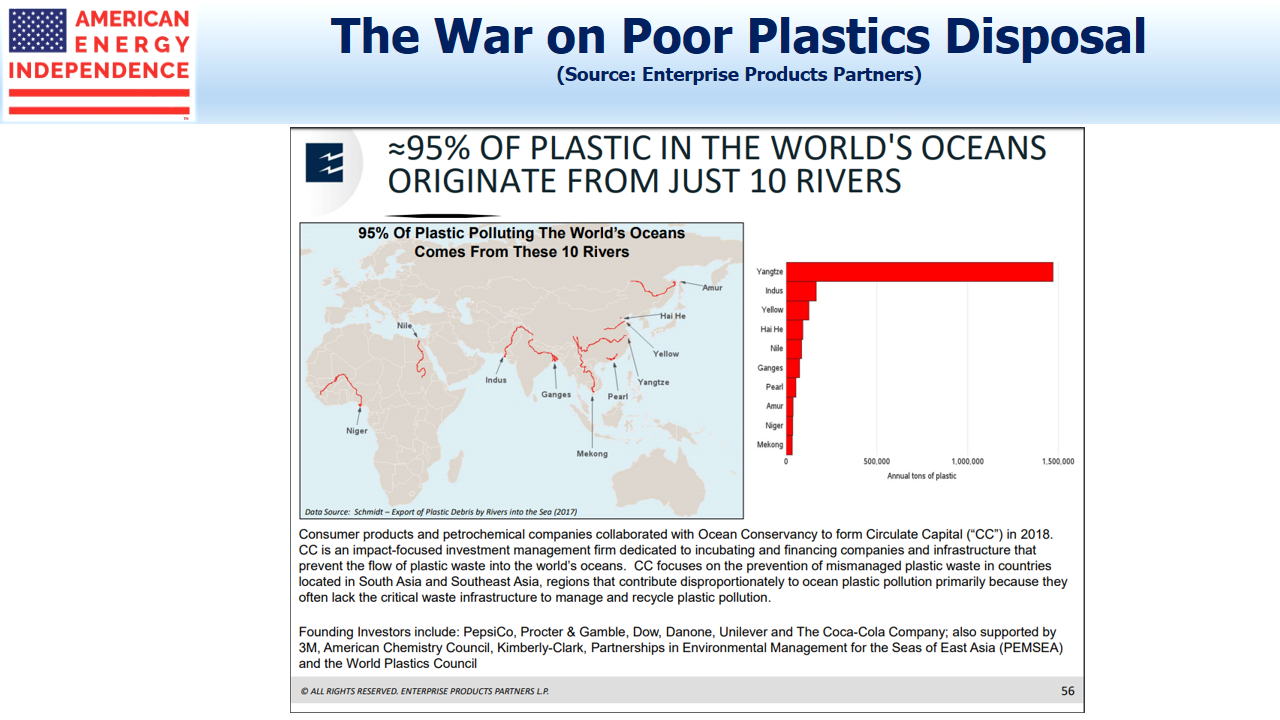 Overall, the news was good and growing free cash flows are beginning to draw interest from a wider pool of investors. We left with reinforced conviction that valuations are excessively pessimistic. Strong returns lie ahead.

We are invested in ENB, EPD, ET, TELL and WMB.