Behind The Fed’s Benign Inflation Outlook

This week the FOMC meets on Tuesday and Wednesday. Most recently released minutes suggest that the gradual cessation of the $120BN in monthly bond buying ($80BN in US treasuries and $40BN in mortgages) is getting closer. Given the history of prior efforts to wean the bond market off Fed support, popularly referred to as “taper tantrums,” careful consideration is being given to every aspect of the decision.

Procter and Gamble, which is in many of the same markets as Unilever, has already warned of price hikes to come in September. Operating chief Jon Moeller said,” “This is one of the bigger increases in commodity costs that we’ve seen over the period of time that I’ve been involved with this, which is a fairly long period of time.”

The housing market continues to be red hot. One client told us he plans substantial increases in rents on properties he owns on Long Island, NY. This is in part to compensate for the difficulty in evicting delinquent tenants. Although the CDC’s eviction moratorium, which has been the subject of court challenges, expires at the end of July, New York State has issued their own moratorium.

More expensive real estate is pushing up rents. Data from Zillow shows that rents are up 7% across the country from a year earlier.

House prices are up too. The most recent Case-Shiller US National average rose 2.1% in the previous month, +14.6% for the year. It is the topic of cocktail conversation among the lockdown-liberated. The Fed’s $40BN a month of mortgage buying is boosting home prices by holding mortgage rates down. 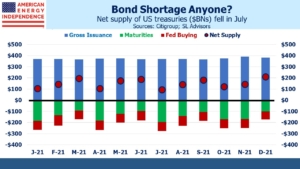 The FOMC will discuss the frothy housing market but may draw comfort from other data. For example, Owners’ Equivalent Rent (OER) is showing a 2.3% year-on-year increase. As we’ve noted, OER is drawn from a survey that asks homeowners what rent they believe their house would command in the market (see Why You Can’t Trust Reported Inflation Numbers). Most homeowners have only a vague notion of what this figure is, or OER would be rising along with actual rents and house prices.

Moreover, how is the FOMC to regard OER if it belatedly starts rising, especially if the actual market for housing and rents starts to cool? OER is never tested against the market, since it’s not based on actual transactions. A homeowner can theoretically offer an aspirational rent estimate in response to a survey from the Bureau of Labor Statistics even if their home would never rent at that level. It’s likely that this dovish FOMC would dismiss rising OER as inconsistent with other data and not reflective of cash transactions. So it’s a useless component of the CPI, albeit a significant one with a 24% weighting. The Fed prefers the index of Personal Consumption Expenditures which uses OER but at a smaller weight.

Dumping the OER concept and relying on actual cash expenditures on shelter would usher the Fed into the world the rest of us inhabit. 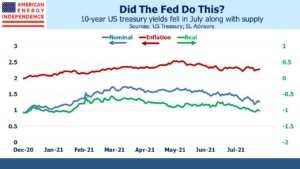 The FOMC may also draw some comfort from falling bond yields. Ten-year inflation expectations, derived from the difference between nominal and real yields on US treasuries, have fallen from 2.5% in late May to 2.28% currently. Fed chair Jay Powell has repeatedly assured us that the rise in inflation is transitory, so he may point to the bond market as confirming this belief. The FOMC remains convinced that there remains plenty of slack in the labor force. Interestingly, the non-partisan Congressional Budget Office believes we are closer to potential GDP, which in their view implies less economic slack than the Fed believes.

Chair Powell may peruse recent work from Citi Research, which takes monthly gross issuance of US treasuries, deducts redemptions and Fed buying to arrive at the net supply to be absorbed by other buyers. July’s $94BN of net supply is the lowest figure of the year, a third less than the monthly average of $150BN. Citi argues that bond scarcity was behind the recent drop in yields.

At first, I thought this seemed too simplistic. Surely the buyers, who are largely central banks and sovereign wealth funds and others with inflexible mandates, must nonetheless be aware of this seasonality and adjust their buying accordingly. But then I realized that our own central bank doesn’t even do that. Their monthly purchases are fairly consistent.

Therefore, the recent drop in inflation expectations that will cause some relief among FOMC members may be in part their own doing. Combined with their failure to accurately measure housing inflation, the FOMC looks increasingly divorced from the real economy.

September is a heavy issuance month, and the Fed will only be buying around 44% of net supply. If they’ve begun tapering by then, it could be even less. Managing portfolios while the FOMC tries to elegantly exit their ongoing partial debt monetization will require deft risk management for the rest of us.