If you feel like it’s been a tough year in the market, you’re not alone. In 2018, virtually no asset class has provided safety. At -3%, US equities are down less than many other asset classes. Developed market equities have slumped 16%, similar to emerging markets equities (-17%) and energy (-15%). The Trump Administration strategy of using tariffs to alter terms of trade is blamed for growing concerns over global growth. The U.S. economy’s huge domestic market renders it less affected by trade than most others. Nonetheless, lower global growth is having an impact. 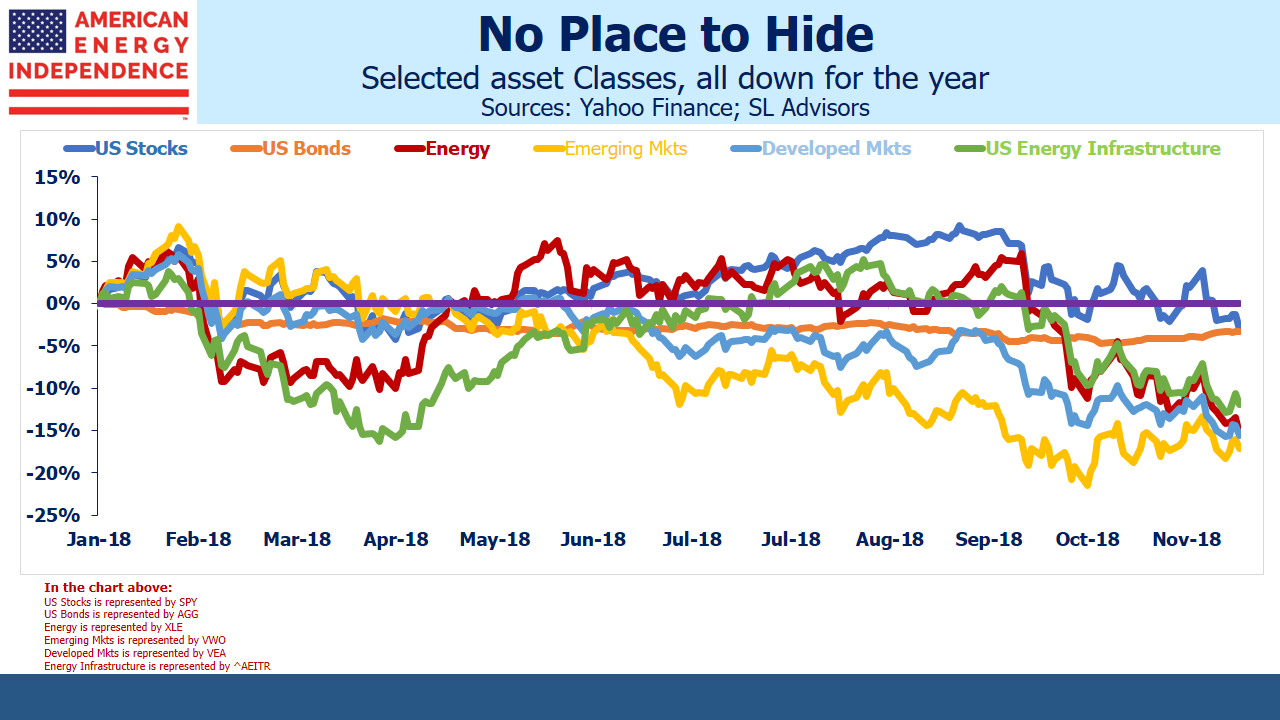 In a startling survey, CNBC found that almost half of U.S. corporate CFOs expect a recession to begin within twelve months. 82% expect a recession within two years. One doesn’t normally consider Federal Reserve members wildly optimistic, but in September they revised their 2019 GDP forecast up modestly (from 2.4% to 2.55%). Although they expect a slowdown by 2020, they’re still forecasting around 2%. The Fed is more bullish than corporations.

Bonds have not provided any protection either this year, with returns of -3%. Unusually, about the only asset class to provide positive returns is cash. The last time this happened was 1969.

The recent sharp drop in stocks has led to fund outflows. Last week’s $39 billion pulled from global equity funds was a record, and it was accompanied by $8 billion in withdrawals from investment grade bonds. Asian stock and bond funds are on track for their first year of net outflows since the 2008 financial crisis.

For a while, rising interest rates were felt to be the biggest threat facing the economy. The Fed is still projecting short term rates of around 3.5% next year, but the recent market turmoil has lowered ten year yields back below 3%. Two year yields of around 2.7% show the market thinks rate hikes next year are unlikely.

The Fed continues to unwind its balance sheet.  Beginning with $10B/month in the fourth quarter of last year they’ve increased the pace to $50B/month as quantitative tightening is now in full swing.

That leaves trade tensions as the meaningful source of investor angst. Given how traders react to Presidential tweets suggesting a resolution, a deal with China could provide quite a boost. Although it’s hard to forecast with any confidence, both sides must recognize that they benefit from reduced trade barriers. Given the decision-making freedom afforded both leaders, a compromise could come at any time and be arrived at quite quickly.

Earlier this year, growth concerns were limited to emerging markets, where tariffs and the strong dollar have greater impact. But the S&P500 has fallen 13% since its September all-time high. Although it’s not yet a bear market (defined as down 20%), emerging markets and oil have both passed that threshold.  Within the S&P, more cyclical sectors including financials, materials and energy have also reached that threshold signaling market concern around a slowing economy while the less economically sensitive utilities sector is near its highs for the year.  Although the steady cash flow businesses of midstream MLPs & energy infrastructure companies more closely resemble utilities they have traded with energy stocks.

2019 S&P earnings are expected to grow by 12% according to Factset. Bond yields below 3% scarcely offer much return, and equities continue to look relatively attractive based on the Equity Risk Premium (see Bonds Still Can’t Compete with Stocks). The bearish outlook of corporate CFOs is troubling, but isn’t yet showing up in, for example, lower capital spending. As long as that remains the case, relative valuation will continue to favor equities.