Last Thursday Jim Cramer described the performance of the ARK Innovation ETF (ARKK) run by Cathie Wood as “attrocious”. This caught my attention – Cramer, whether you love him or not, doesn’t often criticize other asset managers.

It turns out that the demise of ARKK highlights what happens too frequently in finance. To wit, because inflows to ARKK followed strong performance, as is usually the case, it turns out that the cumulative P&L on ARKK is negative. It peaked last February at just under $12BN and has been in steep decline ever since. At the beginning of this year it crossed into negative territory. The average dollar invested in ARKK has lost money. 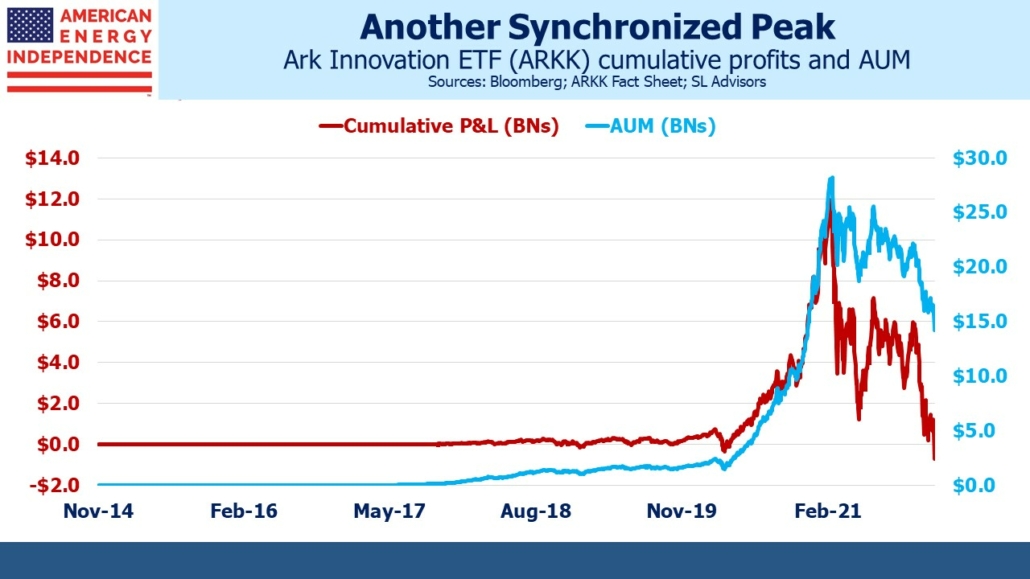 I employed this type of analysis when I wrote The Hedge Fund Mirage a decade ago. The high returns hedge funds generated in the 1990s weren’t enjoyed by many, because Assets Under Management (AUM) was small. There just weren’t that many clients.

Flows followed performance, and by the 2008 financial crisis the hedge fund industry was big enough that in one year it lost all the earlier profits ever generated for investors. This inspired the book’s opening sentence: “If all the money that’s ever been invested in hedge funds had been put in treasury bills instead, the results would have been twice as good.”

This indictment of the hedge fund industry was justified because in its early days “absolute returns” were promised – a positive return over a market cycle. Investors were also led to believe funds would close to new capital once the manager determined deploying it would dilute returns. More common was for the most successful wealthy hedge fund managers to return ALL the capital so they could focus on their own money.

Marketing has moved on since then because absolute returns were unachievable. Good relative returns was tried but also dropped as empirical evidence found this wanting. They later settled on uncorrelated returns, and have succeeded with undiscerning investors ever since. 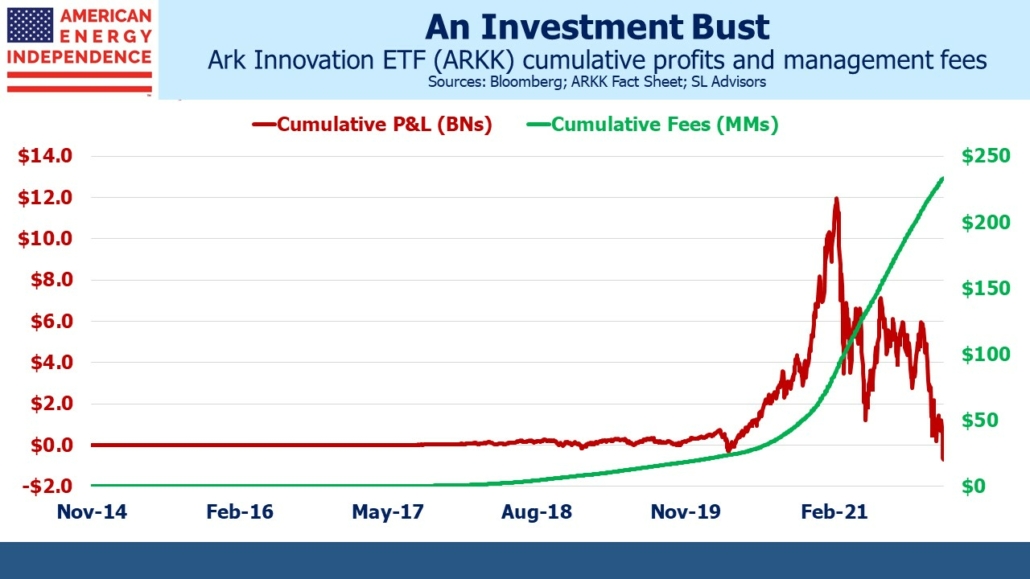 Even though ARKK has now joined hedge funds in generating net losses for investors, it would seem unfair to be quite as critical of PM Cathie Wood. ARKK clearly doesn’t hedge, and every manager believes their fund will generate positive returns. It’s easy to forgive circumstances beyond the manager’s control – your blogger has run an energy mutual fund and ETF for many years. It hasn’t always seemed the place to be, which is partly why performance has been so strong lately.

It is nonetheless sobering to compare the cumulative P&L of ARKK with the management fees earned, which we estimate at around $230 million since its 2014 launch and still piling up at around $300K per day. Clearly an investment in Ark Investment Management, LLC, the advisor to ARKK, was a much better choice than ARKK itself, just as being a hedge fund manager has been far better than being a client. 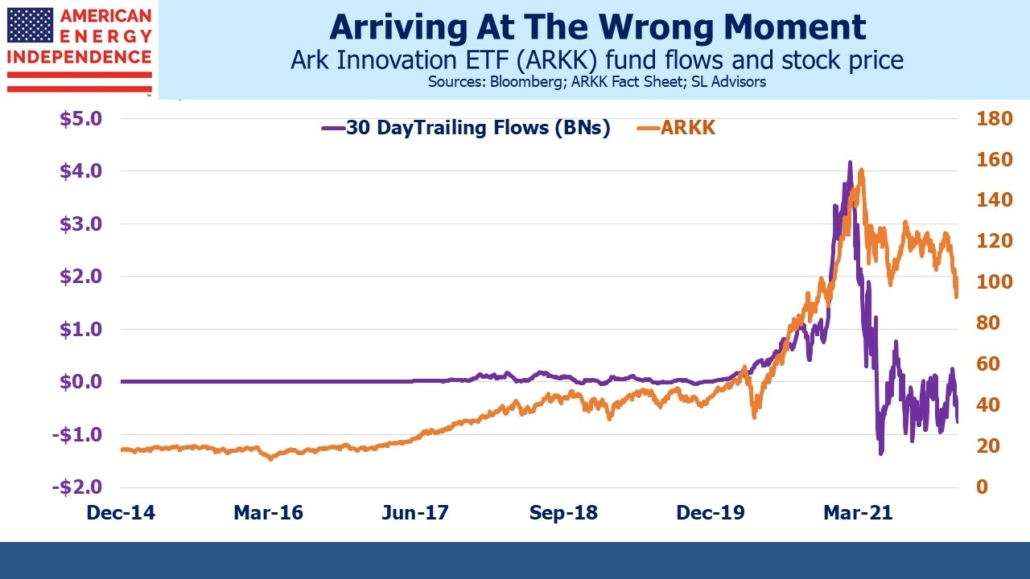 Fund managers can resolve this misalignment of interests between them and their investors by investing alongside their clients. Fluctuations in the value of my personal holdings of pipeline stocks exceed by a wide margin the returns from asset management, which is how it should be.

Even though the contrast between the fortunes of Ark Investment Management, LLC and ARKK is due in large part to inflows chasing performance, it’s still visually striking. A large segment of the investing public needs confirmation from others before committing their own capital.

While copying others is  usually a sound approach in the purchase of most things (cars, consumer goods etc.) financial markets don’t work that way. History regularly provides examples of the folly in following the crowd. But it repeats. The timing of ARKK’s biggest inflows coincided with its peak – the moment of maximum misplaced confidence.

Morningstar doesn’t help. Even now, with a lifetime negative P&L, ARKK has four stars and is the #1 ranked fund over five years. Morningstar’s rankings are all based on quantitative data, presumably to eliminate any analyst judgment. But you might think that the trajectory of ARKK’s cumulative profits would be worth considering. It’s hard to identify much useful for investors here, although Morningstar rankings do drive fund flows which generally benefits managers.

ARKK has still handily outperformed the energy sector over the past five years. Pipelines have not drawn innovation-seeking buyers, instead appealing to more pedestrian tastes. The opposite trajectories of ARKK and energy have persisted during the boom in commodity proces and global energy crisis.

Although there’s no pleasure in seeing ARKK’s fall from grace, the shift from growth to value has benefited midstream energy infrastructure. Pipelines are also a long way from experiencing the type of manic buying that punctuated the peak in ARKK’s share price, which seems like another good reason to consider the sector.