The U.S. Energy Information Administration (EIA) recently published their 2019 Annual Energy Outlook. Whenever your optimism on the prospects for U.S. energy infrastructure waivers, this will restore your confidence. The outlook for domestic energy production is bullish, and in many cases more so than a year ago.

For example, in their 2018 report, the EIA’s Reference Case projected that the U.S. would eventually become a net energy exporter. Now, thanks to stronger crude and liquids production, they expect that milestone to be reached next year. 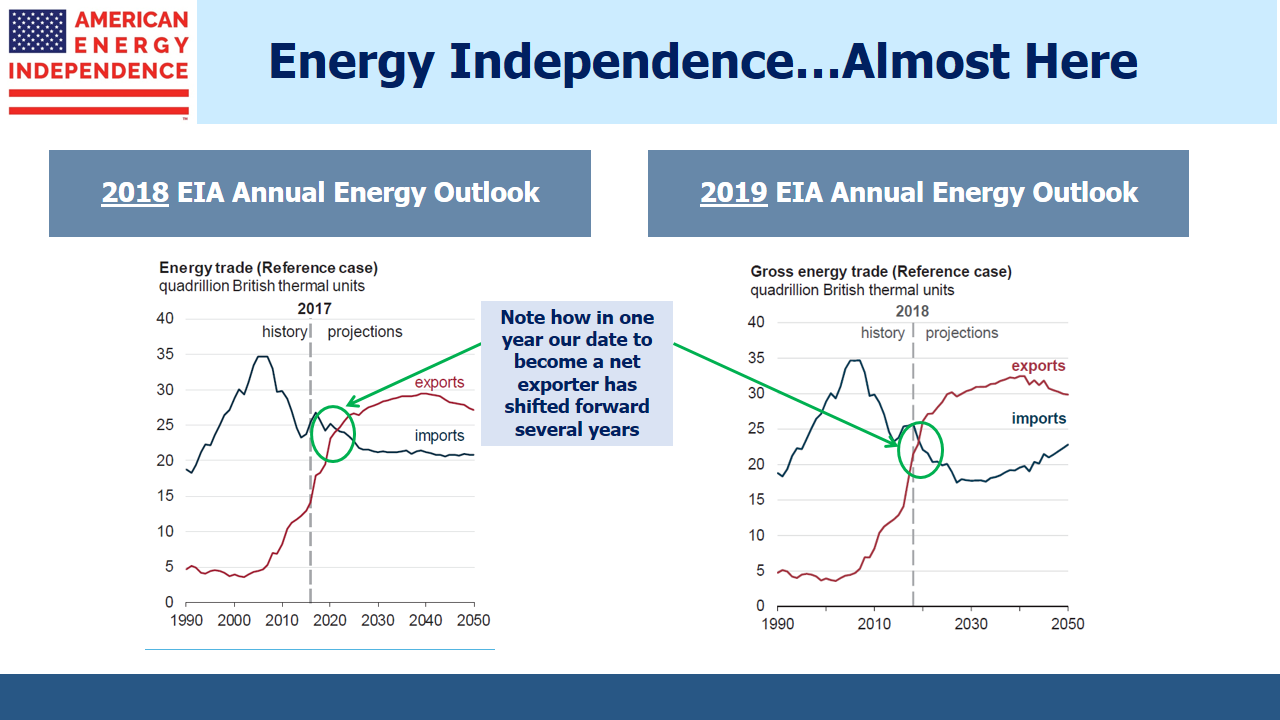 The expected improvement in America’s balance of trade in liquids is dramatic, especially compared with last year’s report. It’s equivalent to an additional 2.5-3.0 Million Barrels per Day (MMB/D) of output. 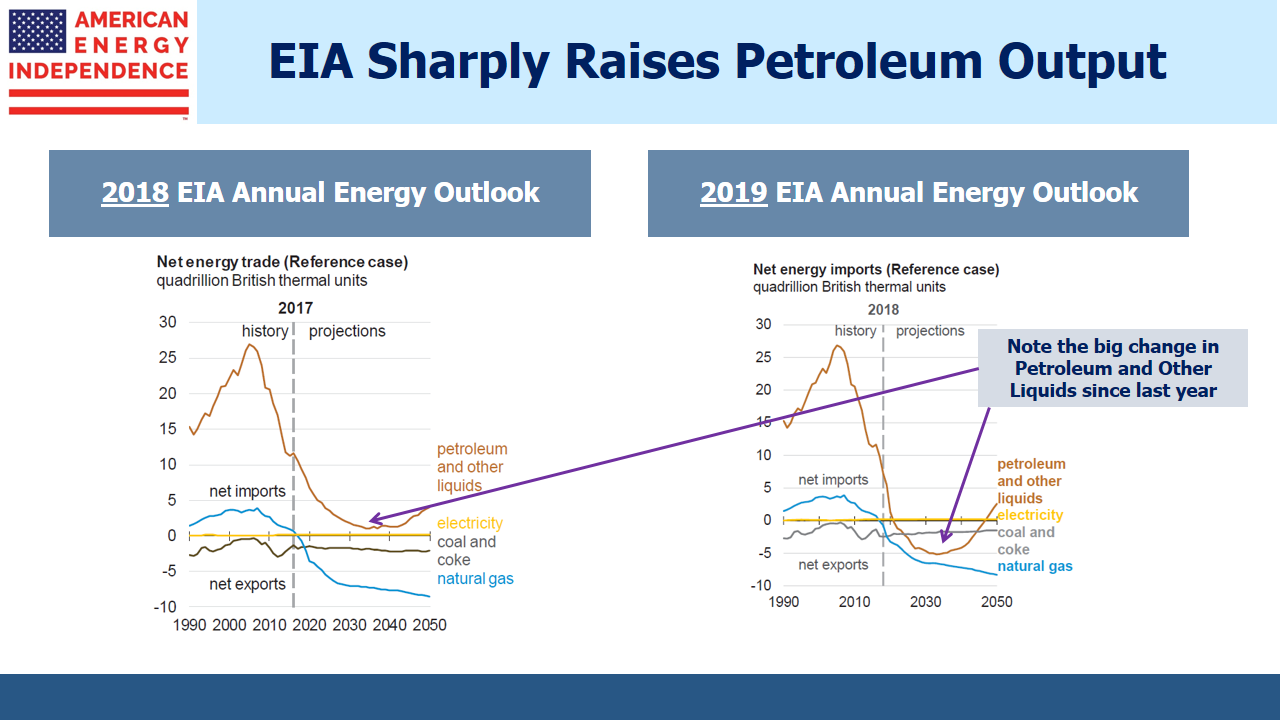 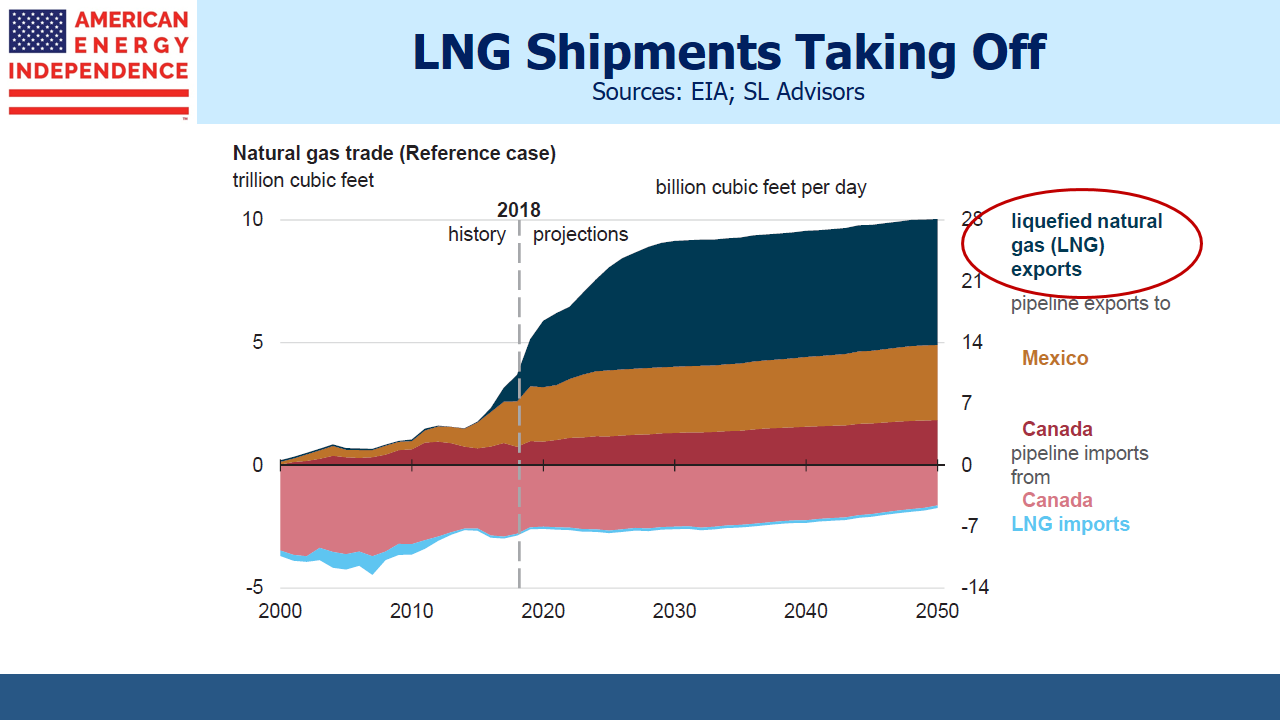 Liquified Natural Gas (LNG) exports are also set to jump sharply, and overall natural gas exports are projected to more than double over the next decade. This is driven by growing Permian crude output, which comes with natural gas as an associated product from oil wells. It’s why flaring is common today, because the needed takeaway infrastructure for natural gas remains insufficient. Mexico’s own infrastructure to import natural gas for electricity generation is still being developed, and new LNG export facilities will provide further demand.

The middle chart in the panel below highlights the correlation of natural gas output with the price of crude oil. This is because the EIA assumes that higher crude prices will stimulate more Permian oil production, producing more associated natural gas. 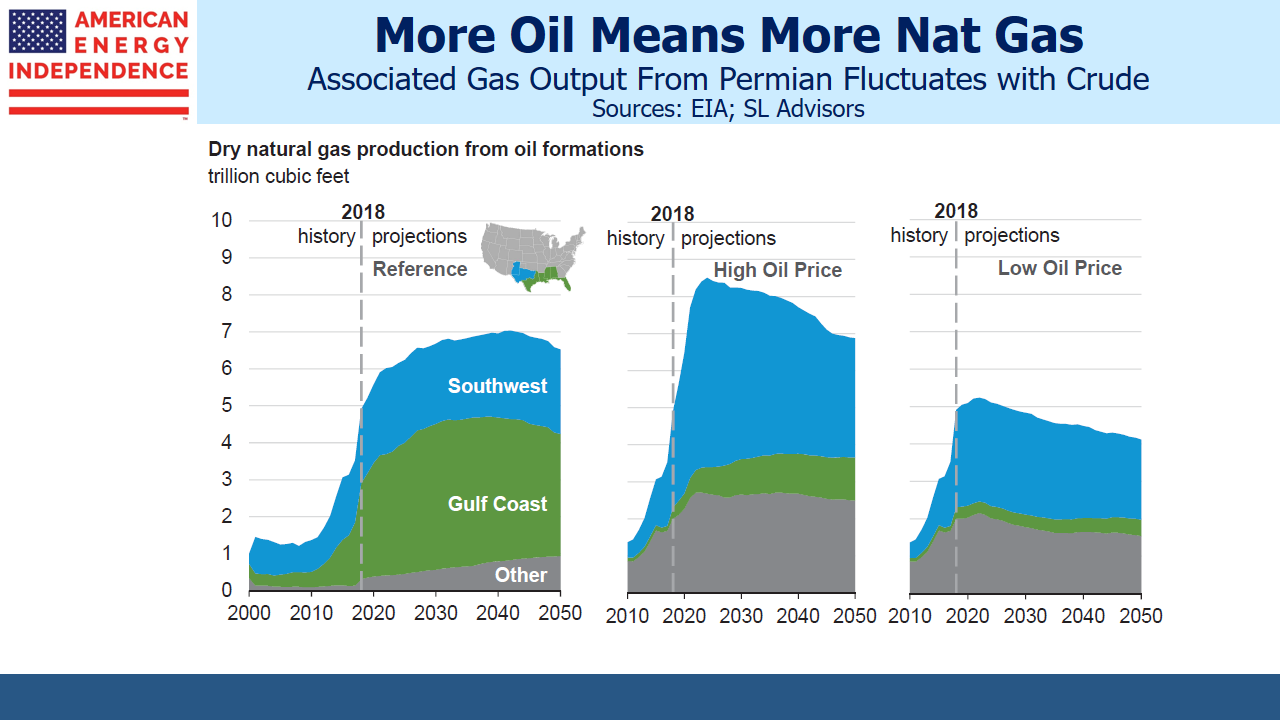 Although use of renewables to generate electricity will grow, they’re still expected to provide less than one third of all electricity even in 30 years. Almost all the growth will be in solar, which works best in southern states that receive more sun. Although my state, New Jersey, is subsidizing residential solar roof panels, they’re not much use in winter. This is especially so because electricity demand generally peaks twice a day, around breakfast and dinner, when people are leaving for work/school or returning home. At this time of year in the northeast, it’s dark during both peak periods. Only half the days are even partly sunny, with cloud cover rendering solar ineffective on the rest.

Moreover, the bucolic, leafy suburbs enjoy plenty of summer shade which can also block the sun from reaching solar panels. Widespread deployment of solar will require cutting down some big old trees that impede southern exposure. 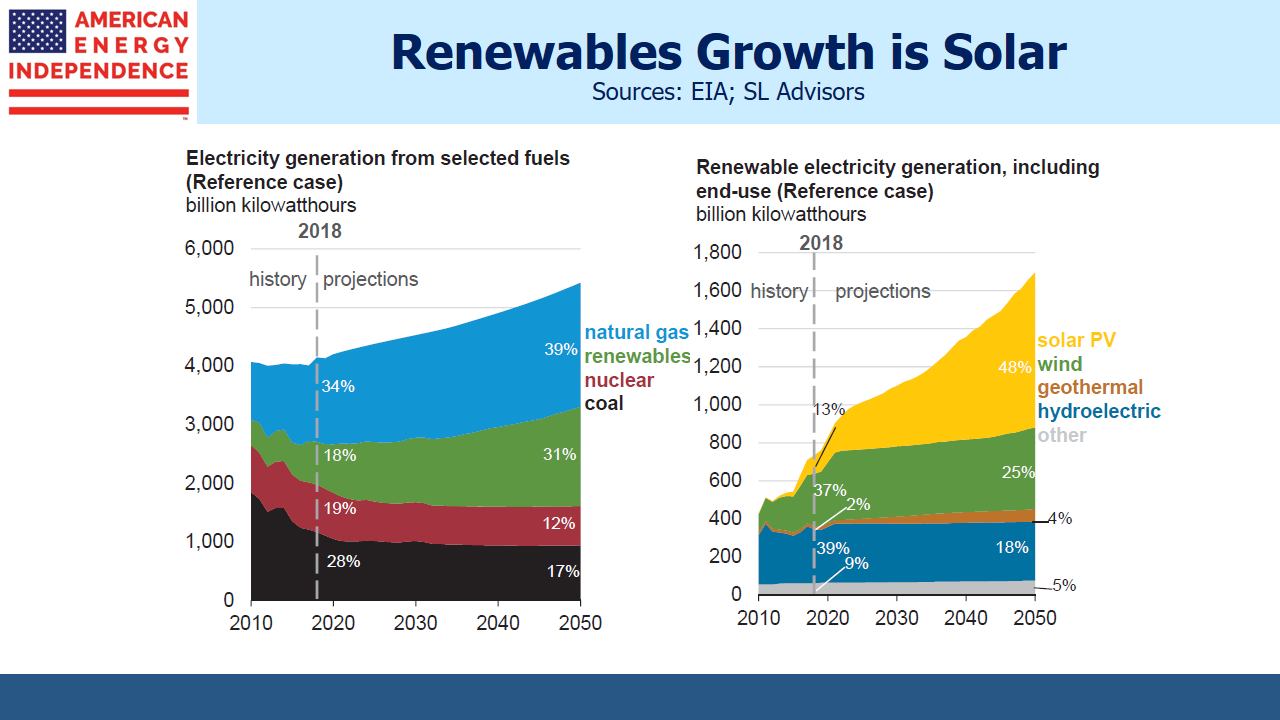 Some extremists desire a carbon-free world, but that Utopian objective ignores the symbiotic relationship natural gas and solar/wind share. They’re complimentary energy sources. Opposing all fossil fuels impedes the growth of intermittent energy sources and forces more excess, redundant capacity. The Sierra Club and those who share their views seek impractical, purist solutions that will struggle both economically and politically. 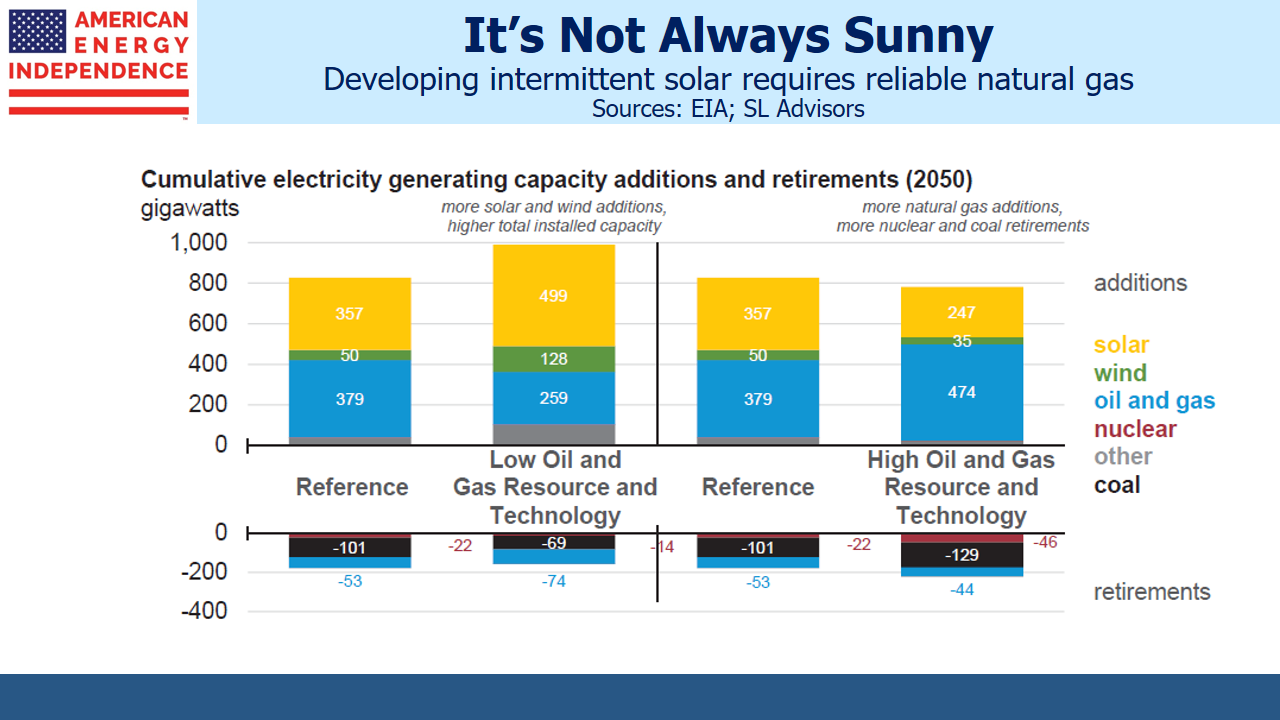 Natural gas is in many ways a bigger U.S. success story than crude oil. Its abundance ensures continues low prices, supporting both exports as well as cheaper domestic electricity than most OECD nations. Because the U.S. has some of the lowest-priced natural gas, different scenarios nonetheless offer fairly uniform growth in output. Natural gas prices are less susceptible to the cycles of crude oil, which combined with America’s advantages noted above makes investing in its infrastructure more attractive. 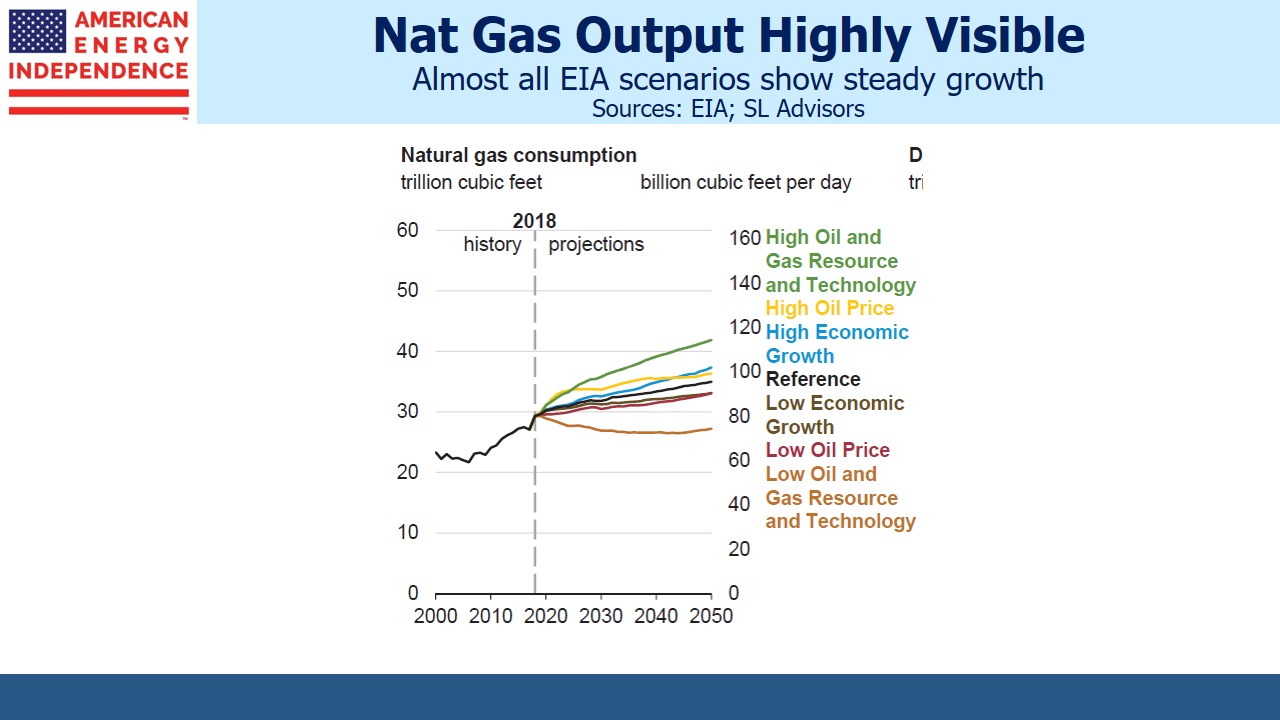 There’s plenty in the EIA’s 2019 Outlook to support a bullish view for midstream energy infrastructure. Financing growth projects has weighed on stock prices for several years, leaving investors frustrated and complaining about insufficient cash returns. But if the peak in growth capex peak is behind us, as looks likely, free cash flow and payouts should start increasing again. Cash flow yields on the sector average 12% before growth capex. This is analogous to the funds from operations metric used in real estate, but double the yield on the Vanguard Real Estate ETF (VNQ), for example. REIT investors should take note.