Earnings season is here, and with it the quarterly ritual of the earnings conference call. Quite a few MLPs have declared their distributions, and of the 32 that we’ve seen so far none have cut while half have announced increases. Those we care about include Western Gas Equity Partners (WGP), which announced a year-on-year increase of 19.2%. Its MLP Western Gas Partners grew at 10.7% year-on-year, illustrating the faster growth enjoyed by General Partners. Similarly, EQT GP Holdings and EQT Midstream, increased their 2Q16 distributions 63% and 22% respectively over 2Q15. Magellan Midstream (MMP) grew at 10.8% year-on-year, while Crestwood Equity Partners (CEQP) was flat after cutting its distribution in April (see Crestwood Delevers and Soars). CEQP still yields over 11%.

Kinder Morgan (KMI), no longer a Master Limited Partnership (MLP) but nonetheless a bellwether of the sector, reported a solid quarter and maintained its dividend (slashed by 75% in December) unchanged. KMI is big enough that their fortunes are somewhat reflective of the overall energy infrastructure industry. Chairman Rich Kinder can scarcely have had a wilder ride than the last three years. In January 2014, frustrated by the weakness in KMI’s stock price in the face of relentless criticism from a small research firm, Kinder famously said, “You sell. I’ll buy. And we see who comes out best in the long run.” 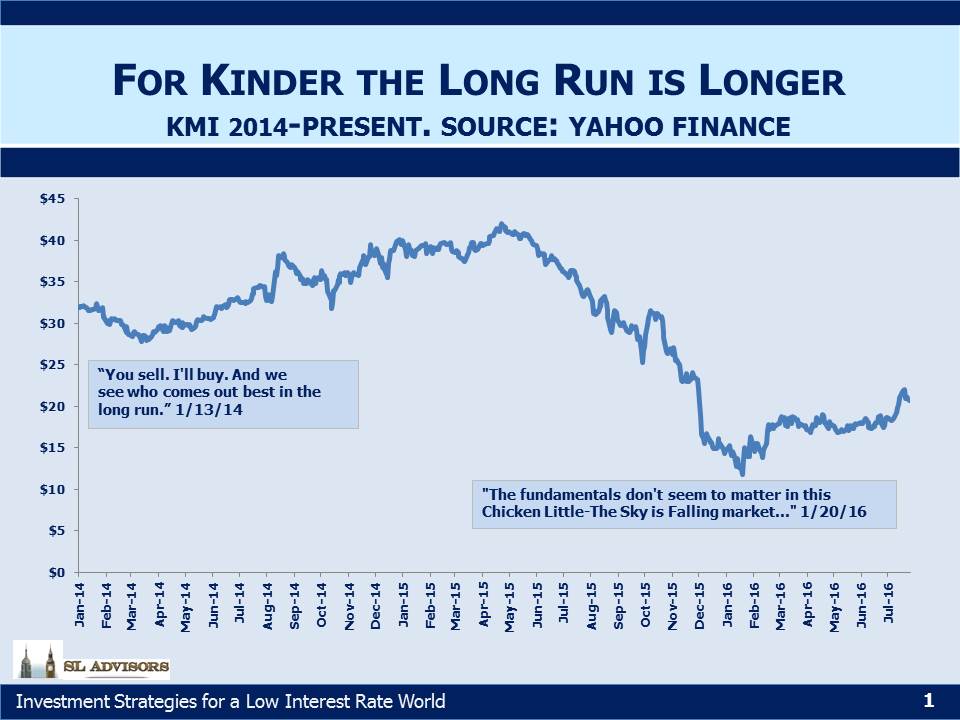 Kinder no doubt believes the long run is longer than the time since he spoke those words, because KMI is still substantially lower than it was back then. Kinder was still bullish at the top, and his antagonist remained bearish at the bottom. At least they both have conviction. Like other MLPs, Kinder Morgan identified growth opportunities beyond the appetite of traditional MLP equity investors to provide financing. In 2013 MLPs were raising more in equity capital than they were paying out in distributions (see The 2015 MLP Crash; Why and What’s Next). The Shale Revolution had created the need for more infrastructure, but it still strained their traditional financing model almost to breaking point. Kinder of course abandoned the MLP model altogether and became a conventional corporation (a “C-corp”), which made their stock available to any global investor and not just the limited pool of U.S. taxable, K-1 tolerant buyers. For the rest of the MLP sector, new mutual fund and ETF buyers provided an additional source of equity capital for a time, but falling prices caused some of them to exit. Every MLP investor by now knows how 2015 ended. KMI hoped to maintain the MLP distribution payout model of returning approximately 100% of Distributable Cash Flow (DCF) to investors. Finally, with the double-digit yield on their stock communicating a complete absence of gratitude for this largesse, they accepted the inevitable and slashed the dividend so as to delever their balance sheet (see Kinder Shows The MLP Model is Changing).

Which brings us to the most recent earnings call. Successful, big companies don’t shift strategy every quarter, even if sell-side analysts desire more “market-responsive” (i.e. fickle) planning. KMI had long argued that a Debt/EBITDA ratio of 5.5-6.0X was appropriate given their diversified business. The strategy shift triggered by the dividend cut in December was accompanied by a new, relentless focus on bringing this leverage ratio down to 5.0X. The cash saved by reducing the dividend was earmarked for paying down debt and financing growth projects, resulting in a less levered, self-financing KMI.

December 2015 to July 2016 is scarcely the long run by most standards. Nonetheless, analysts on the recent call were heard asking why KMI couldn’t finance some of its backlog of growth projects by issuing debt. Their $13BN backlog has a capex/EBITDA multiple of 6.5X, and is currently financed fully with internally generated cash (i.e. equity). This is down from 7.5X at their Analyst Day earlier this year, the result of “high-grading” their backlog (i.e. dropping the less attractive ones).  With a 15% unlevered after-tax return target on projects and a borrowing costs in the low single digits one can begin to see the appeal of debt financed growth.

Two quarters ago, sell-side analyst questions revolved around the speed at which KMI could reduce its leverage. Today, they’re being asked why they don’t increase leverage. One can hear the sighs of exasperation in the management team as they respond to the shifted goalposts such questions represent. It’s why running a private company can be more attractive – in fact, we often noted last year that if MLPs were unlisted and investors had to rely fully on financial statements in their evaluations, they would have concluded that not a great deal had changed. But this rapid shift in sentiment is what creates the opportunities for those that are able to keep their eye on the ball. Happily, Barron’s is shifting gears rather more slowly, with their first cautiously positive piece on MLPs in recent memory (see MLPs: Is It Safe to Dive Back Into the Pool Yet?). Skepticism is good.

We are invested in CEQP, KMI, MMP and WGP