Last week was the annual MLPA conference, in Orlando, Florida. It’s safe to say the guests at nearby Walt Disney World had a more carefree time than beleaguered MLP investors. One long-time attendee described the mood as “glum”, noting that energy sector investors had expected a more vigorous rebound.

Although the conference is organized around presentations by management teams in the Hyatt Regency’s cavernous ballrooms, the private meetings that take place on the periphery are far more valuable. It’s also nice to catch up with some familiar faces.

We had a full schedule of meetings with management teams, usually with just one or two other investors in attendance. The most pressing question for MLP investors of late is, if Exploration and Production (E&P)  companies (i.e. MLP customers) are continuing to increase production of oil and gas, why isn’t this good for MLP stock prices?

In fact the entire energy complex has had a terrible few months. MLPs are -2% YTD although the sector feels as if it’s been falling for months. Meanwhile, the Oil Services ETF (OIH) is -22%. U.S. crude output is 9.2 MMB/D (Million Barrels per Day) and is widely expected to reach 10 MMB/D next year by many observers, including OPEC. 1Q earnings for E&P names as well as for MLPs recently were generally good with positive guidance. The fundamentals remain encouraging . To paraphrase a typical question from a financial advisor invested in our mutual fund, “If you’re so smart, how come we’re losing money lately?” 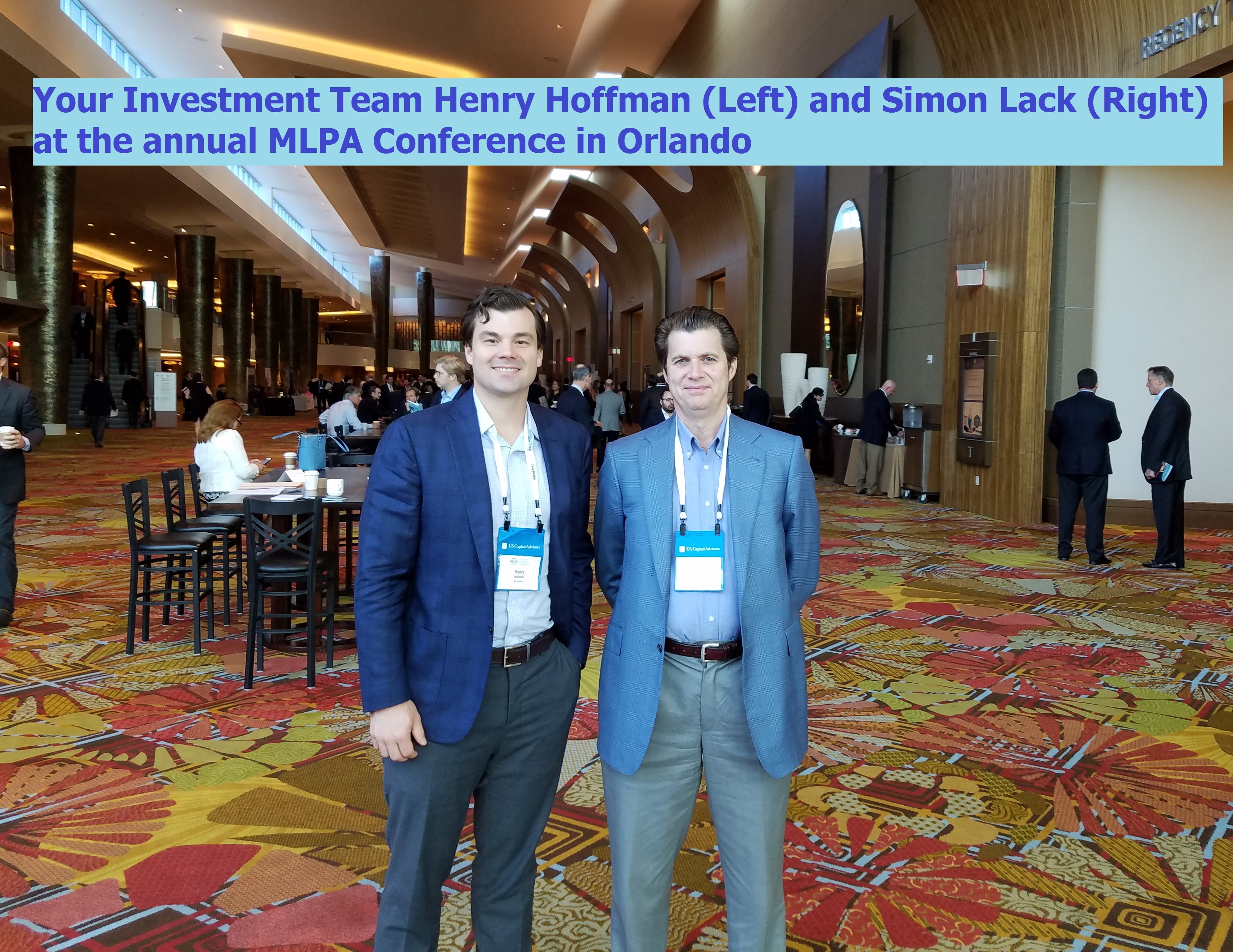 When asked about recent stock price weakness, MLP executives were similarly puzzled. The good news is that they’re not spending much time worrying about it – following the 2015 Crash many steps were taken to reduce reliance on the fickle equity markets. Leverage is down and distribution coverage is up. Distributions have been held flat and in some cases cut in order to finance growth, while growth projects have been screened for higher returns. Generally, MLPs don’t have a pressing need for capital. While stock price weakness makes both management and investors poorer, it’s not being met by a desperate rush for capital to complete projects. And in some cases, such as Targa Resources (TRGP), equity capital even at lower prices was nonetheless attractive financing for their recently announced Natural Gas Liquids pipeline from the Permian Basin to North Texas.

In short, management teams usually exuded excitement about greater utilization of their existing infrastructure and growth plans. They dismissed the high recent correlation between MLPs and crude oil as a temporary phenomenon and not reflective of improving midstream fundamentals. For investors who rely on the market to confirm the wisdom of their recent decisions, it’s a time for patience while America’s journey to energy independence sends ever more hydrocarbons through our pipelines, processing units and storage facilities.

We enjoyed the discussion with Tallgrass Energy (TEP) CFO Gary Brauchle. We’ve followed TEP for a while (see Tallgrass Energy is the Right Kind of MLP). Four years ago their Rockies Express natural gas pipeline (REX) looked increasingly redundant as its west-east flow from the Rocky Mountains to Ohio faced growing competition from the Marcellus shale. TEP reversed the flow on the eastern end of this pipeline, and is looking at making the entire line two-way. Apparently our meeting was the same day as a bearish report from an obscure research analyst, but his criticisms must have lacked substance since nobody raised the subject. 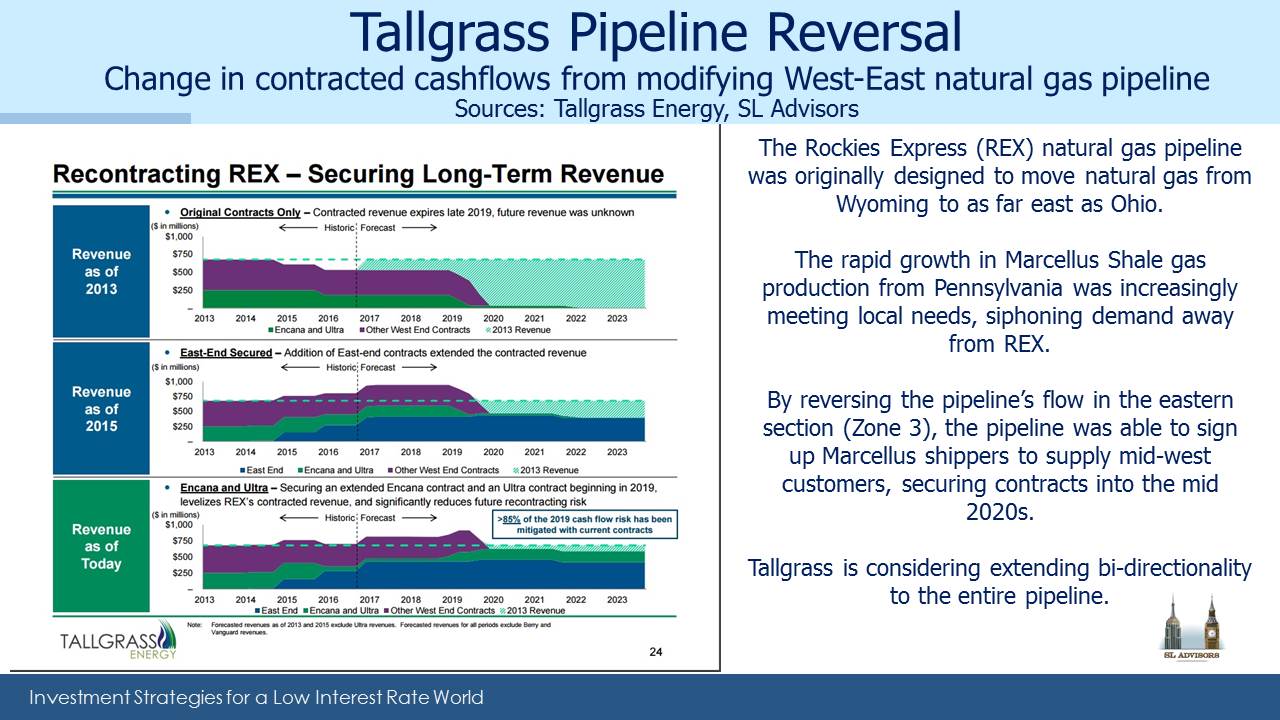 The MLP investor base has changed in recent years. Pre-Shale, it was an income generating asset class with modest growth. The Shale Revolution created a substantially greater need for capital to fund growth, such that during 2010-13 MLPs were raising more in equity than they were paying out in distributions (see The 2015 MLP Crash; Why and What’s Next). The conversion of the investor base from income seeking to growth seeking was not smooth. One CEO estimated 75% turnover in his shareholders over two years.

Topics of discussion included the drop in attendance from last year, although the convention facility is so big it rarely seems crowded. There was some surprise at the pricing of Antero Midstream GP’s (AMGP) recent IPO, with a yield of 1%. Even with the 73% annual distribution growth forecast by one underwriter, by 2020 it would still yield just over 5%. They may pull it off, but sharing some of that execution risk with an eager set of IPO investors seems like a smart move.

Those who had seen the presentation from the IPO roadshow chuckled at the inclusion of SnapChat as a comparable (because of its very high cashflow growth). We thought that, along with the pricing, betrayed a fairly demeaning view of investors by management. It seems most things need to go right for AMGP, and a stumble will expose the gulf in valuation between AMGP and, say, Plains All American (PAGP) with its 10% Distributable Cash Flow (DCF) yield. If MLPs were in a bubble, AMGP would be Exhibit 1, except they’re not. 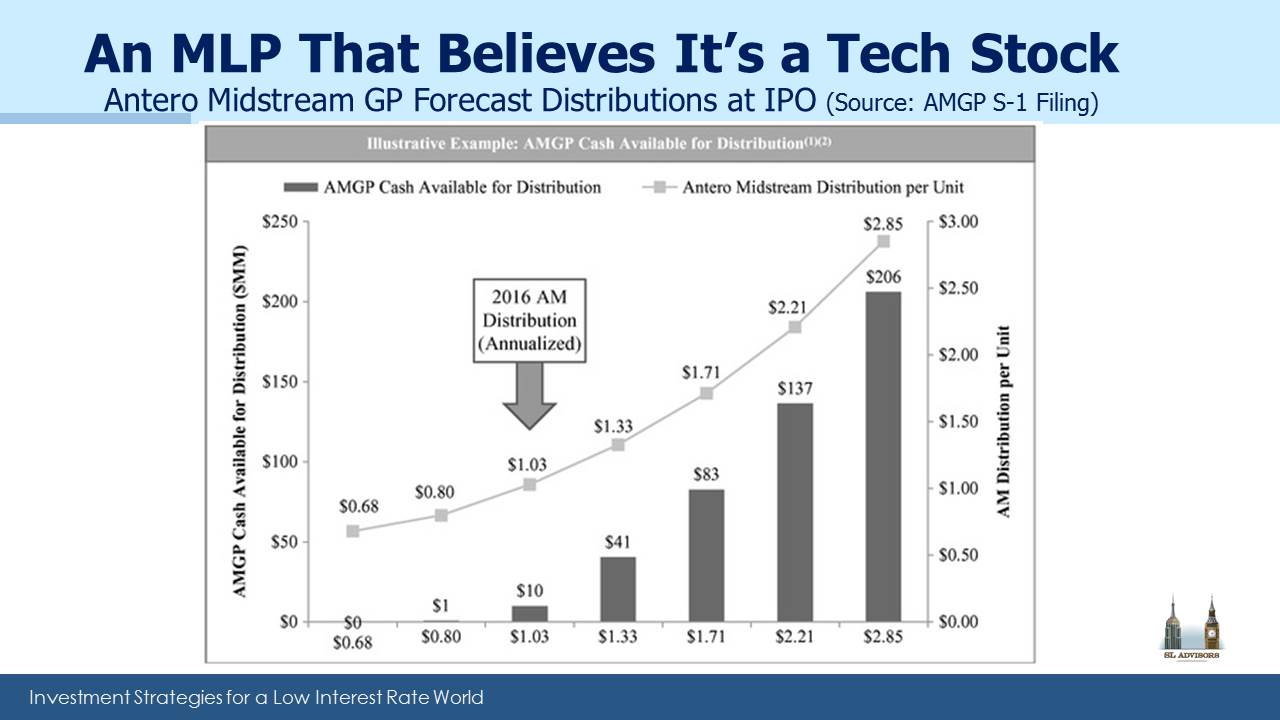 In many of the meetings managements were peppered with very granular questions about percentage utilization of a particular asset next quarter. These generally came from sell-side analysts looking to refine their models so as to forecast the next quarter’s earnings and DCF. No doubt these are important topics, but we feel such “forest for the trees” questions miss the big picture. America is heading to Energy Independence, and midstream infrastructure is vital to that goal. In the near term, it might seem important to try and forecast a quarterly fluctuation, but it’s very hard to do so consistently.

Far more importantly, over the next few years what other asset class can possibly compete when America is headed towards being the world’s biggest crude oil producer (see America Is Great!)? Last November OPEC lost, and consequently our E&P companies are gaining market share. The short-cycle projects that are Shale represent a completely different risk paradigm to conventional drilling with its inherent uncertainty over returns (see Why Shale Upends Conventional Thinking). Gathering and Processing networks with their close exposure to the wellhead are more exposed to volume uncertainty in the short term, but over the longer term they’ll be utilized. These are the issues that will drive returns, and while most investors are probably aware of the big picture their questions often betrayed a blinkered view.

MLP management teams hold substantially more money in GPs compared with MLPs when given the choice within the GP/MLP structure. What could be a more powerful statement about the upside they see than their personal investment in the vehicles with operating leverage? The managements of Energy Transfer Equity (ETE) and TEP are communicating their opinions with their commitments of personal capital (see table at the end of The Limited Rights of Some MLP Investors).

In discussing their allocation to MLPs, I often ask investors what is the next most attractive sector of the equity markets beyond energy infrastructure, with its huge tailwinds, substantial future growth and 7% yields selling at 30% off its 2014 all-time highs. It doesn’t require much thought to buy what’s rising, but not much else is cheap.

In summary, value-seeking investors should draw comfort from the complete absence of irrational exuberance at this year’s MLPA conference. Today’s MLP investors are for the most part a patient bunch.

We are invested in ETE PAGP, TEGP (the GP of TEP) and TRGP