Although we mostly write about the energy infrastructure sector, we also run an investment strategy designed around low volatility stocks. There’s generally less to say on this sector – we long ago concluded that exploiting the relative under-pricing of such stocks could not be improved much with market timing. So we hold securities we’d be happy to hold for years and generally don’t mess with it too much. We define low vol stocks as businesses that have a long history of steady earnings and dividend growth, above average return on invested capital, moderate need for ongoing capital expenditure, dividend yield above 3% and volatility approximately less than half that of the S&P500. We run three versions of this strategy: Low Vol Long Only, Low Vol Hedged and Low Vol Best Ideas. For more detail about this strategy see Why the Tortoise Beats the Hare and check out our Strategies page.

2016 was a good year for this type of investing – last January we had no idea this would turn out to be the case beyond a suspicion that mean reversion would cause 2015’s relatively flat results to be improved upon. Active managers tend to pick stocks that will move more than the market. Otherwise, demonstrating skill at security selection would take too long. Slow moving stocks deliver their results slowly, and if you’re going to fail at something it’s better to do so quickly so you can move on to the next thing. Consequently, low vol stocks experience little love from the CNBC crowd. This in turn makes them interesting if your goal is the best chance of steady, relatively tax efficient appreciation in your portfolio. We sometimes describe it as low octane equity exposure – good for someone who likes stocks but is wary of a big drop. These stocks will drop too, but generally not as far and when they are down at least they won’t give your wife reason to question your sanity (see How To Invest Like A Woman in our June 2014 newsletter).

We check the results of this strategy every day and I can tell you it’s impossible to predict its performance even if you know what the broader market has done. This low correlation with the S&P500 is complemented by a tendency to do relatively poorly in a strong market and relatively well in a weak one. In a hedged format one might expect it to lose money when stocks are up a lot and make money when they’re down, a useful form of diversification to most portfolios.

This brings us to the outlook for 2017. Since we noted in the first paragraph that we don’t see much benefit to timing this strategy, those looking for such insight will be disappointed. However, we have given more thought than normal to this issue because of the election. Trump’s victory didn’t just suggest alternative employment to pollsters; it has led to significant portfolio shifts as investors adjust to a sharply different outlook for many elements of Federal government policy including fiscal, trade, health care, regulatory and defense.

While the direction of Trump’s policies can be reasonably guessed at, their execution and possible unintended consequences are hard to assess at this point. Fiscal expansion with tax cuts will increase Federal borrowing. The Fed’s glacial pace of tightening will quicken, although on their forecast of three hikes in 2017 we’d take the under. A stronger US$ will moderate GDP growth from being quite as high as fiscal stimulus would otherwise drive it. The specific impact of trade conflict is very hard to predict.

It’s quite possible that stocks could deliver double digit returns next year, propelled by a cyclical upswing in earnings. Low vol stocks would not be the sector of choice in such an environment. Hedged low vol stocks might lose money.

The blogging investment manager creates countless opportunities for public embarrassment, and what follows is potentially another. Our inclination not to modify our low vol strategy in this light reflects not arrogant certainty, but instead a modest acknowledgment that tactical shifts are hard to do well. Investing is all about choices – it’s meaningless to describe an asset class as expensive except by reference to another, cheaper one.

It starts with interest rates, since they (1) define the discount rate at which future cashflows are valued, and (2) represent the main alternative to stocks. Yields on ten year U.S. treasuries may have put in their absolute low in 2016, but that doesn’t mean that they will quickly return to a level which discerning investors might consider attractive. We’ve noted before that the Federal Open Market Committee (FOMC) rarely misses an opportunity to do nothing when a previous Fed chair would have acted. Betting on them not doing what they threaten has worked for long enough now that there seems little point in overthinking things. We’d have to be surprised first before changing our view. So on the Fed’s forecast of three tightenings in 2017, we think two is more likely. For more on our past musings on Bonds see Bonds Are Dead Money. 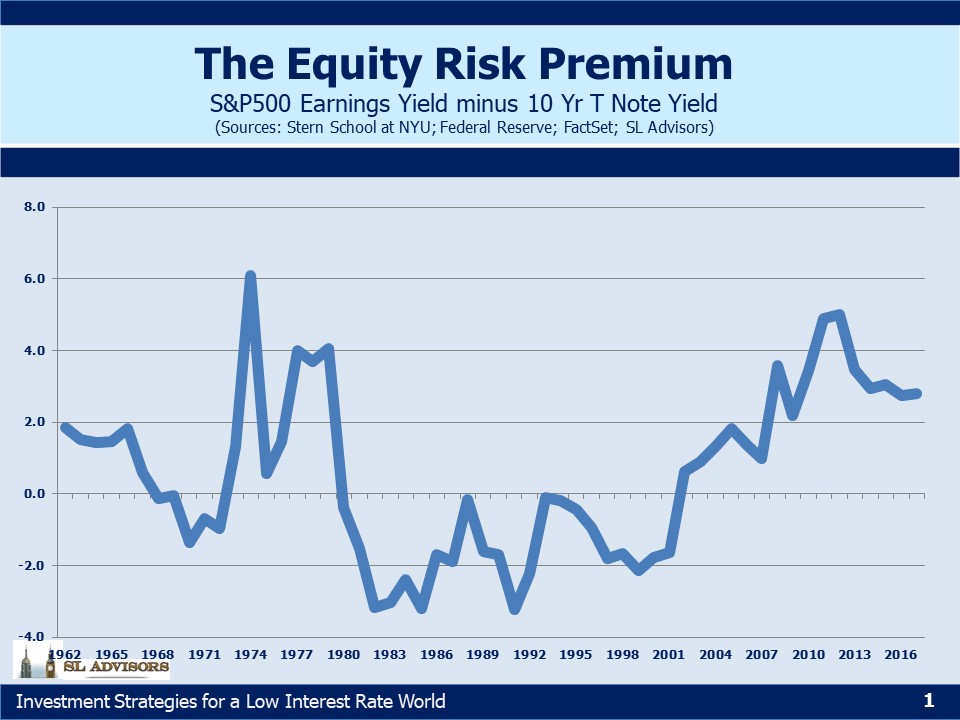 Assume a ten year yield 0.50% higher at around 3%, and 2017 S&P500 Earnings Per Share (EPS) of $131.75 (the average of the FactSet Top-Down and Bottom-Up forecasts). The Equity Risk Premium in the chart above still favors stocks over bonds. We may be in an environment in which real interest rates (i.e. treasury yields minus expected inflation) are permanently low. If so, we’re unlikely to favor bonds anytime soon. The spread between yields and stocks would need to be at least 2% narrower before we’d assess bonds were competitive with stocks. We’re not holding our breath.

So if the S&P500 continues to offer better prospects than bonds, what about low vol stocks? The macro shifts outlined above have prompted many commentators to question their prospects. And yet, on a relative valuation basis using trailing Price/Earnings ratios, low vol stocks if anything look relatively cheap compared with the broad index. The two areas circled show the S&P500’s P/E of just over 21X with the S&P500 Low Vol Index figure of just under 20X, and compares with their history over the past three years. 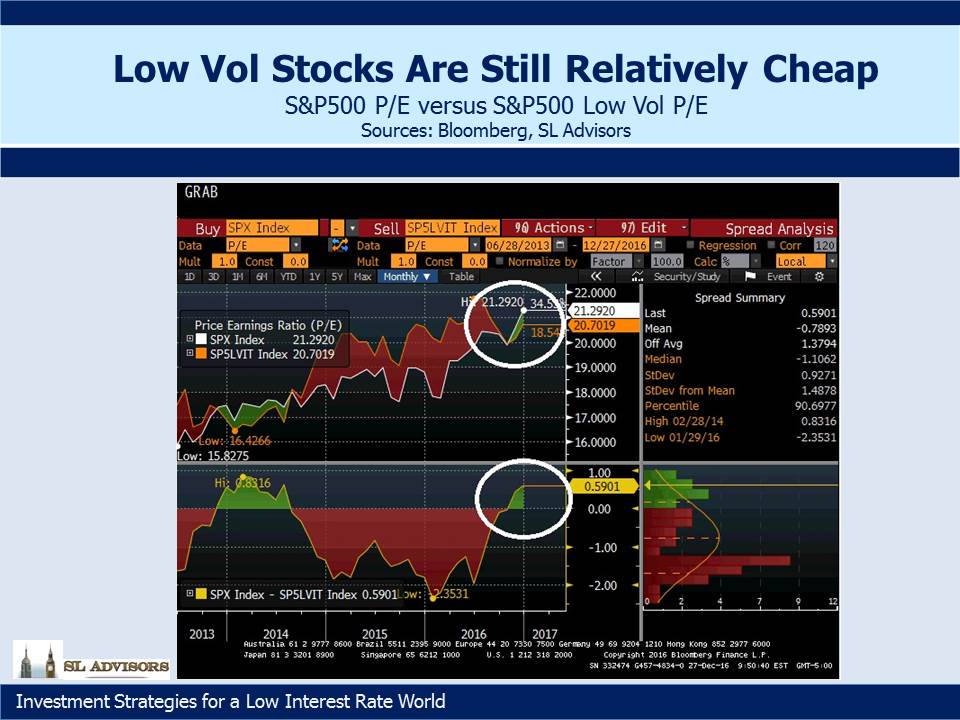 The two charts aren’t definitive, but together they provide us with sufficient basis to be optimistic about the long run performance of our low vol strategies continuing. Forecasting the next couple of quarters is very hard, but over longer periods we believe we are increasingly likely to be happy with the result.