Are You in the Wrong MLP Fund?

For those who follow MLPs closely, one of the enduring mysteries must be the mindset of investors in the Alerian MLP ETF (AMLP). Investors who desire MLP exposure but don’t want K-1s have been attracted to AMLP and a whole host of other inefficient ETFs and mutual funds. As we’ve written before (see, for example, The Enormous Misunderstanding About MLP Funds and Taxes), funds such as these convert the K-1s they receive into the 1099s desired by their investors by paying corporate income tax on their returns. The result is that an investor in a C-corp MLP fund such as this earns substantially less than the index – somewhere close to 35% less since that’s the portion ultimately paid to the U.S. Treasury.

It’s all disclosed in the prospectus, and credit Ron Rowland for first pointing out this pretty fundamental weakness back in 2010. But it turns out few investors or their financial advisors make it to page 5 of the document where the paragraph on “Tax Status” explains that AMLP is a corporate tax payer. 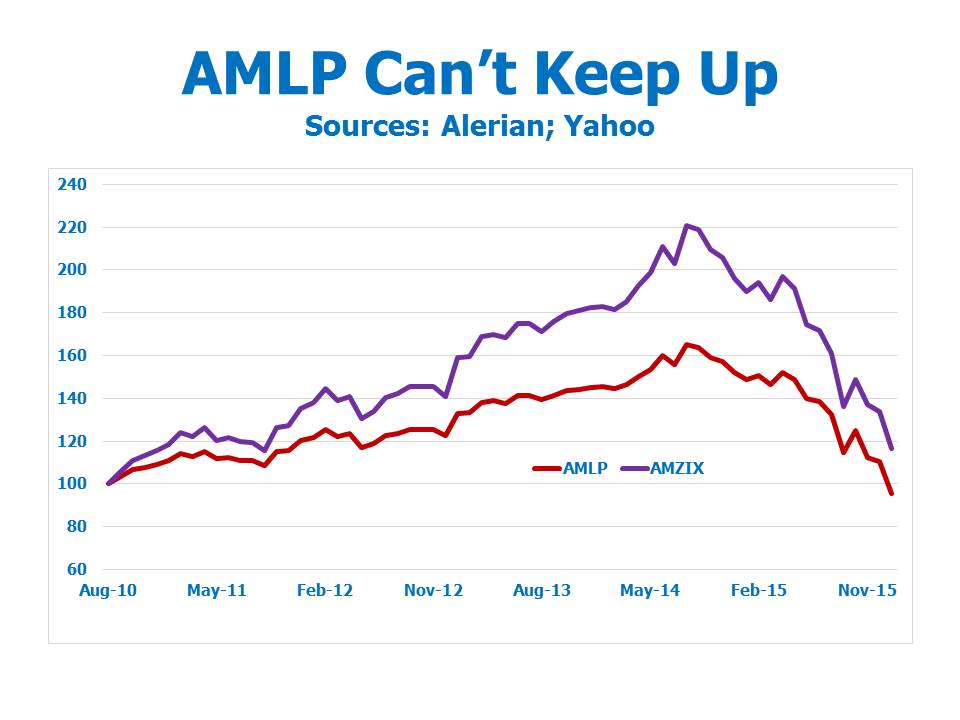 The result, as would have been clear to anyone who carefully examined the fund’s structure and is shown in the first chart, was that AMLP lagged the Alerian Infrastructure Index (AMZIX) from its launch until the market peak in August 2014. Then as the market turned down, AMLP fell less quickly, since it had an accumulated Deferred Tax Liability (DTL) on which to draw. It provided, in an odd sort of way, less volatile exposure to MLPs because the taxes acted to dampen movements both up and down.

The second chart shows monthly returns for AMLP alongside AMZIX since its launch in 2010. Visually, you can see that the moves in AMLP both up and down are generally less than the index against which it is benchmarked. 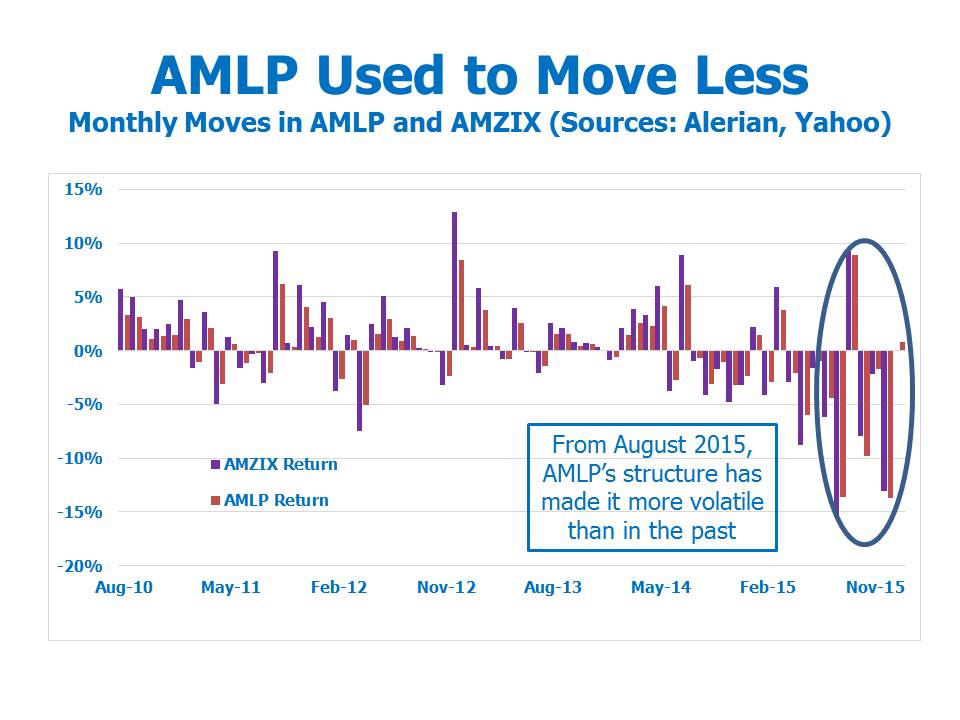 In August 2015, a year into the MLP bear market, this relationship changed in a way that was disadvantageous to the AMLP investor, in that AMLP began matching the moves in its index rather than moving less than the market. The reason is that AMLP had exhausted its DTL. Taxes are owed on unrealized gains, and the market had fallen far enough to wipe them out completely. As those gains became losses due to further drops in MLPs, AMLP was unable to carry a Deferred Tax Asset (DTA) because of its status as an open-ended investment company. While an operating company can offset losses against future taxable gains, AMLP and its peers cannot. 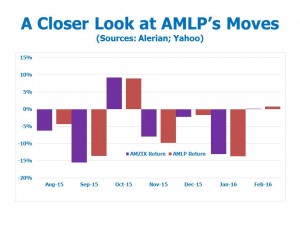 The third chart focuses in on the monthly swings in AMLP and AMZIX since August 2015 to show that they are much more closely matched.

This is an extremely poor bargain for AMLP investors, because since then they have continued to absorb 100% of the losses in the market but on a recovery, as soon as AMLP gets back to having unrealized gains on its portfolio the taxes will kick back in and investors will once more only receive 65% of the upside. It’s like betting $100 on red at Roulette knowing you’ll only get paid $65. In July 2015 we forecast that this would happen if prices continued to fall (see The Sky High Expenses of MLP Funds). It’s likely that all taxable MLP funds face the same return asymmetry, since MLPs fell far enough to wipe out unrealized gains across the board.

The tax drag shows up in the expense ratio, which for AMLP is currently an eye-popping 5.43%, of which 4.58% is taxes. Virtually no-one I’ve spoken to who’s invested in AMLP is aware of this, as I know from numerous conversations on the topic. The discovery is invariably met with a combination of horror and embarrassment.

The yield on AMLP doesn’t reflect the tax drag, because the taxes come out of the NAV. So while Morningstar lists the yield as 11.81%, a discerning investor would deduct the 4.58% tax drag from this figure to arrive at 7.23%, substantially below the yield on AMZIX.

The defense of the fund’s structure is that it provides MLP exposure without the K-1s, and it does that after a fashion. But in my experience few investors truly comprehend the substantial loss of performance they suffer because of this. It’ll be no surprise to its designers, but AMLP has underperformed its benchmark over every time period since inception other than last year when the tax drag temporarily reduced its downside.

In fact, AMLP’s structure made it the perfect shorting vehicle for hedge funds seeking to bet against MLPs last year, and there is ample anecdotal evidence that this was going on. The asymmetry of its returns (up 65% of the market/down 100% of the market) clearly works to the benefit of the short. In addition, while shorting a security renders you liable for the dividends paid to investors, AMLP’s expense ratio was a substantial mitigant because the tax drag reduces the NAV. In this way, the tax costs incurred by the investors act to reduce the financing costs for shorts, so AMLP investors by owning the security were aiding the very market participants whose objective was to drive down prices and force them out of their investment with losses. Given how MLPs performed last year, hedge funds shorting AMLP evidently enjoyed some success.

The Mainstay Cushing MLP Fund (CSHAX) is similarly structured and invariably underperforms its benchmark. Portfolio Manager Jerry Swank was asked by Barron’s in June 2012 why the fund had lagged its benchmark since inception in 2010 and he replied, “As a corporation, what a mutual fund gives up is a tax drag on the net asset value, as much as a 38% tax drag on NAV.” CSHAX has an expense ratio of 9.42%, of which 7.94% is taxes.

The questioner should have asked, ‘Can you really claim to put investors’ interests first if you design a vehicle like this?’ Instead she moved on, but really; who seriously expects a mutual fund to pay away almost 8% of its clients’ capital in taxes? Funds such as these rely on the cursory examination most retail buyers give to the terms of their investment. They trust finance professionals to recommend thoughtfully designed securities, and that trust is not always well placed.

These securities and others like them (we calculate there are around $20BN outstanding) are deeply flawed. They exploit the unfortunate proclivity of many investors towards superficial research and while their shortcomings are disclosed in documents they’re certainly not understood by their investors.

If you own AMLP, CSHAX or any of the other highly-taxed MLP funds (the clue is a high expense ratio), all is not lost. While their purchase was an error, you can sell now and take the tax loss, maintaining your exposure to a deeply undervalued sector with a RIC-compliant MLP fund properly structured so as to not be a corporate taxpayer. And if your financial advisor has invested your money in a taxable MLP fund, call and ask him if he knows what the expense ratio is that’s eating away at your investment. He’ll probably pay closer attention to fund structure in the future.