Up Is The New Black

Watching the Valeant (VRX) disaster unfold has, for those who are bystanders like us, resembled viewing an express train hurtling off an unfinished bridge into the ravine below, taking with it the reputations of some highly regarded investors. You’ll find no criticism here – professional humility has always been part of our DNA but if it wasn’t, enduring the 58.2% collapse in Master Limited Partnerships (MLPs) from August 31st, 2014 to February 11th, 2016 assured an additional helping (those dates and figures are imprinted in my memory). Watching someone else’s catastrophe is an awe-inspiring distraction, in the same way that one feels sorrow for the victims of a foreign earthquake while assuring oneself of the sensible choice to not live on a fault-line. We’ll resist the self-satisfied observation that Valeant’s fall eclipsed even the most hated energy infrastructure MLP. During a stunningly brief period of a few months from August 5th, 2015 through last Friday, down for VRX investors was a long way – a staggering 89.7%.

We have no opinion on VRX and certainly wouldn’t suggest that its collapse was obvious. But it’s often the case that fund flows develop their own momentum. While Pershing Square and ValueAct, two large hedge fund investors in VRX, can manage their exposure to this calamity with little regard to fund withdrawals given their long lock-ups, the asset base of Sequoia’s mutual fund (SEQUX) is at the daily whim of its investors. Having similarly peaked with VRX on August 5th, SEQUX is down 33.5% and redemptions are likely causing unwilling selling of VRX by its managers. Morningstar’s placing of its rating under review can’t have helped their fund marketers. 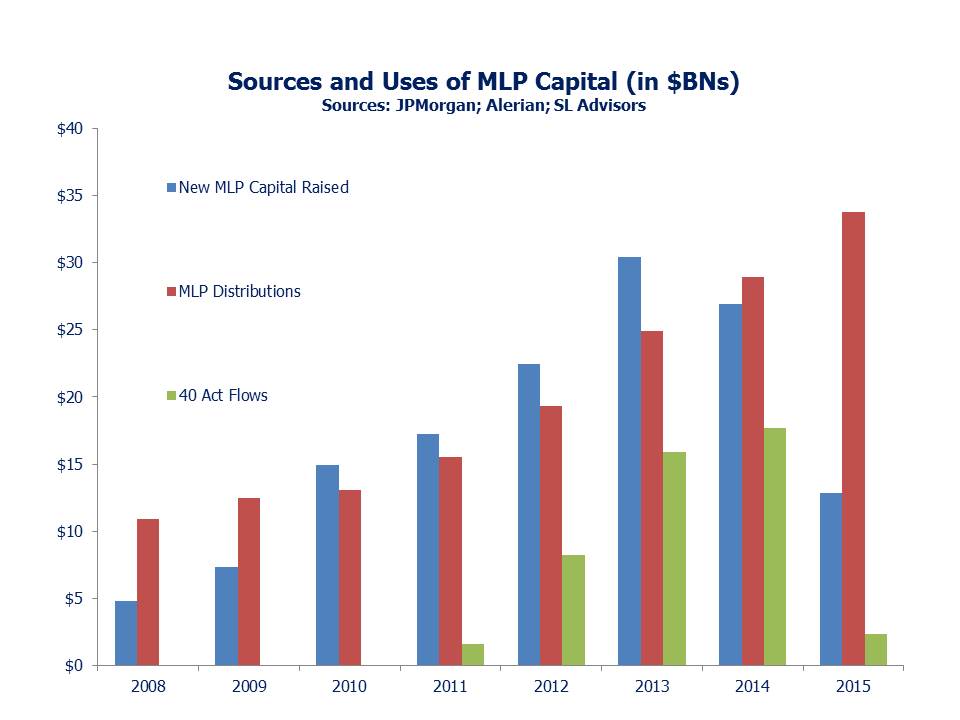 Whatever the true value of VRX, in the short term Ben Graham said the market’s a voting machine, and investing in public equities forces you to endure the popularity (or loss thereof) of your holdings. MLPs certainly found that even as their security prices offered ever greater discounts to value, the marginal investor was nonetheless more often a seller rather than a buyer.

It’s worth revisiting the above chart, originally shown in early January (see The 2015 MLP Crash; Why and What’s Next), which remains our best explanation for the substantial dislocation we endured. Although MLP distributions (in red) used to comfortably exceed new capital raised (in blue), the Shale Revolution gradually reversed this relationship by creating an ongoing need for new infrastructure which required financing. The increasing shortfall between cash paid to investors via distributions and cash taken back via IPOs and secondaries was, for a time, met with new money from mutual funds and ETFs (in green) until falling prices induced these more recent investors to curtail inflows and eventually switch to outflows. Ultimately, institutional flows from non-traditional MLP investors were attracted (see Real Money Moves Into Real Assets). Although operating performance of midstream MLPs wasn’t immune to the collapse in oil, their stock prices often fell by  many multiples of their drop in EBITDA. We continue to believe that what happened exposed the financing model of MLPs far more than their operating results, and that the flow of funds explanation is the most likely cause.

One pre-requisite for buyers to overwhelm sellers is excessive pessimism, and VRX is at least approaching that zip code. 21 of 23 analysts following the stock were bullish prior to last Tuesday’s earnings call, following which there was an undignified rush for the relative anonymity of a target price close to the current market. One firm slashed its target price from $200 to $70 (on Friday VRX closed at under $27). MLPs saw something similar over the past several weeks (see Pity the Equity Analyst) as sell-side analysts reacted as humans to the relentless criticism their bullish forecasts received from investors apportioning blame for their losses. On recent trends, MLPs should soon be positive for the year. The last time that could be said was May 8, 2015. Over the following seven and a half months the sector turned in its worst year ever. Whether or not February 11th, 58.2% below the August 2014 high, was the low for MLPs, it couldn’t be so without sufficient Wall Street analysts giving up. Industry mutual fund flows were heavily negative into the end of 2015, and there’s evidence more recently that flows are turning.  We’re still 43% below the market peak. It is at least no longer unfashionable to expect rising MLP prices.

On Thursday, TransCanada (TRP) announced that they had agreed to acquire Columbia Pipeline Group (CPGX) for $10.2BN in cash (of which $4BN was funded with the proceeds of a TRP secondary offering of equity). The Wall Street Journal had reported on the negotiations several days earlier. TRP of course is behind the Keystone XL pipeline project which was eventually blocked by the Administration, further challenging Canada’s E&P companies as they seek ways to ship crude oil from Alberta to foreign markets.

CPGX is the General Partner that controls 15,000 miles of natural gas pipelines, mostly at the GP level although their MLP Columbia Pipeline Partners (CPPL) holds some of the assets. TRP saw no need to acquire CPPL, since their acquisition of CPGX already gives them control of CPPL and thereby retains the ability to continue dropdowns into the MLP where assets can be more cheaply financed although crucially this financing option isn’t currently available. The deal is the classic use of the MLP/GP structure. CPGX as the GP is analogous to a hedge fund manager, and CPPL is the hedge fund. Owning CPGX provides control of CPPL. CPGX, or now TRP, can eventually move assets into CPPL and continue to earn Incentive Distribution Rights on them, similar to a hedge fund manager earning a fee on assets in his hedge fund. 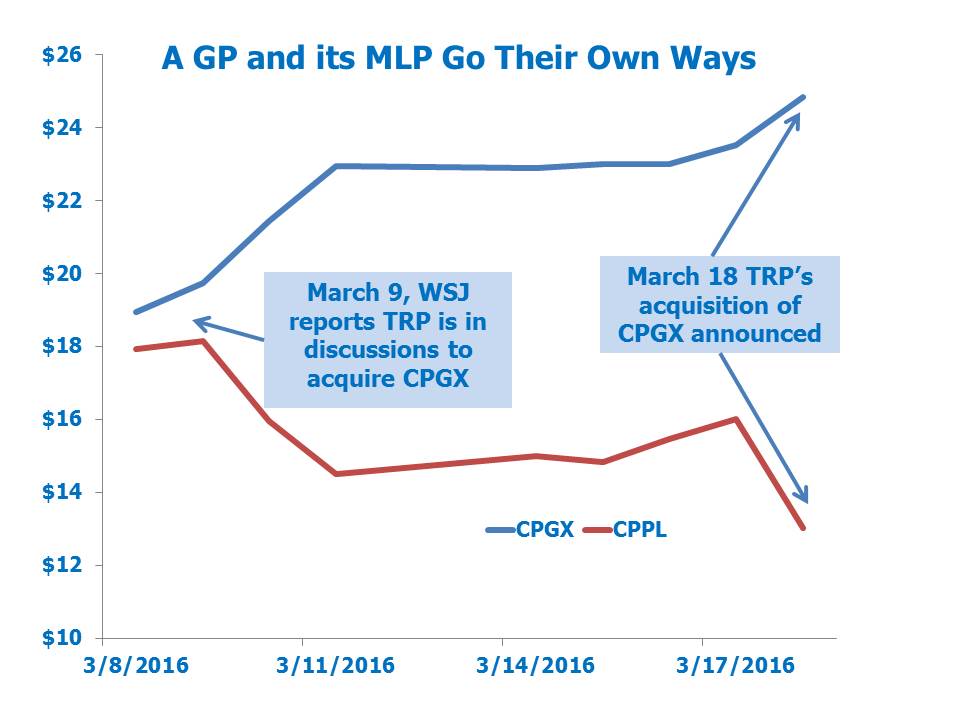 Although the acquisition valued CPGX at 19X 2016 estimated EV/EBITDA compared with TRP’s 12.75X, TRP expects the transaction to be accretive from 2017 as some of the CPPL backlog drops into production. TRP expects to finance $8BN of projects at CPGX over the next four years, earning $5.5BN in EBITDA over that time and exiting 2020 at a $1.7BN run-rate. The cancellation of Keystone and delay in another big project (Energy East) has left room in TRP’s budget, in addition to which TRP’s size leaves it better placed to finance this kind of backlog. Prior to the deal, CPGX was yielding 2.25%. Moreover, CPGX and CPPL moved sharply in opposite directions following the announcement (Chart Source: Yahoo Finance), as the market reflected the control premium paid for CPGX that wasn’t necessary for CPPL. This illustrates why owning MLP GPs is better than owning MLPs. 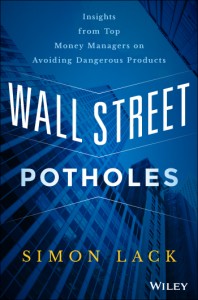 On Wednesday,,March 23rd at 7pm, I’ll be giving a presentation on my new book, Wall Street Potholes,  at the Westfield Memorial Library, Westfield, NJ. Attendance is free.