A New Approach to Bonds

Countless investors and financial advisors wrestle today with the conundrum of how to approach bonds. We are reminded constantly of the likelihood of rising interest rates; most recently Fed chair Janet Yellen reiterated the case for a hike in short term rates later this year. She argued that uncertainty over Greece was likely to be merely a near term concern, and equity market turmoil in China did not deserve even a mention. It has been well forecast, if not overly forecast, for some years now. The Fed has consistently been too early in their expectations of timing, but it’s looking increasingly as if 2015 really is it.

As if walking a tightrope, today’s investors are forced to balance the impact of changed Fed monetary policy on bonds with their faith that holding an allocation to bonds must remain part of their portfolio construction. It’s a radical thought to reject bonds entirely — and yet that’s what we’ve done at SL Advisors since its formation in 2009. Reasoning that the government really doesn’t want you to own bonds (else why set rates at such unattractive levels) I wrote in Bonds Are Not Forever that  when public policy is to transfer real wealth from savers to borrowers, thoughtful investors take their money elsewhere. Not only are bond investors routinely subjected to insults to their intelligence by bond yields that fail to cover inflation plus taxes, but rowdy borrowers are increasingly announcing that they can’t repay what was owed, as I noted in our recent newsletter. Greece is seeking debt forgiveness (since winning independence from Turkey in 1822 the country has been in default 50% of the time); Puerto Rico’s governor announced they cannot repay their debt. Reaching for yield can mean sharing in the problems of the profligate. Consequently, we haven’t invested our clients’ capital in bonds for many years, and don’t see that changing until yields are more attractive (perhaps double current levels on ten year treasuries).

In this weekend’s Barron’s the cover story makes the case for abandoning bonds altogether.The article makes the case (as we have for years) against low fixed interest rates. It will probably attract the attention of many individual investors although I believe a serious omission has been to overlook Master Limited Partnerships, one of the most attractive income generating investments around with a current yield of around 6.45% on the Alerian Index and a long history of steady distribution growth.

A few years ago we sought to articulate the case for stocks over bonds by illustrating the relatively small amount of capital one needed to allocate to stocks in order to achieve the same cash return as with bonds. The crucial point is that coupon payments from bonds are fix 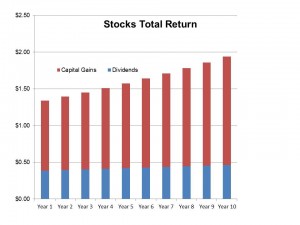 ed while stock dividends grow. The S&P500 currently yields around 2%. Historically, dividends have grown at around 5% annually. So if you invested $100 in stocks today you’d receive a $2 dividend after the first year but if past dividend growth of 5% annually continued, in ten years your $2 dividend would have grown to $3.26. Put another way, if dividend yields are still 2% in ten years time, your $100 will have grown to $162.89 (that’s the price at which a $3.26 dividend yields 2%).  Since returns on stocks come from dividends plus their growth, a 2% dividend plus 5% growth equals a 7% return. Naturally, the two imponderables are (1) will dividends grow at 5%, and (2) will stocks yield 2% in 10 years (or put another way, where will stocks be?). These are the not unreasonable questions of the bond investor as he contemplates a larger holding of risky stocks in place of bonds with their confiscatory interest rates.

The thing is, while nobody knows the answer to these two questions, it doesn’t take much of your capital in stocks to replicate the cash return you might achieve with bonds in the scenario just outlined. The Treasury Bond Interest chart (Source: SL Advisors) shows the annual interest on a 2.3% yielding bond (the current level on ten year treasury notes)  if you invested $100 (assuming a 40% tax rate, approximately the top margin Federal income tax rate, so $2.30 annually falls to $1.38). The Stocks Total Return chart (Source: SL Advisors) shows the return from investing just $25 in stocks, so the $0.50 dividend (2% on $25) is, after 24% ta 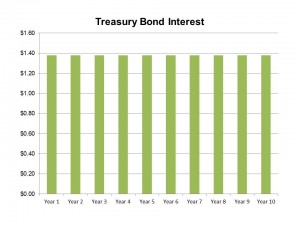 xes, around $0.38. This assumes the Federal dividend tax rate and the ObamaCare surcharge but excludes state taxes.

The intent is to show visually what the Math does, which is that given the assumptions described you only need use 25% of your bond money invested in stocks to achieve the same cash return that you might expect from bonds. While switching out of bonds into stocks might sound imprudent to many, the real choice is between $100 in bonds or $25 in stocks with the other $75 in Cash. The 25/75 barbell portfolio of stocks and cash can quite plausibly replace the bond portfolio. If stocks fall 50%, your barbell would lose a quarter of that, or 12.5%. Whereas, a move in ten year yields from, 2.3% to 4% would cause the same loss of value. Consider for a moment which is more likely.

Of course, an investor may prefer the certainty of a loss of real value after inflation and taxes that bonds offer, compared with the uncertainty of stocks. In effect, that is what every bond investor is choosing by virtue of owning bonds. But in the 25/75 barbell portfolio we’ve assumed that there’s no return to the cash portion, and while that is more or less true today it will change over ten years; in fact, cash will probably begin earning a return (albeit still small) later this  year if Janet Yellen does as expected. The Math of stocks over bonds is compelling. It’s this analysis that has informed our rejection of bonds for years. This is the unspoken logic behind Barrons and their article, A New Approach to Bonds. It’s not quite as new as they think.