Many years ago, in a different investing climate and a different decade, a cut in interest rates was usually regarded as a stimulative move by the Federal Reserve. Lower financing costs were regarded as helping the economy more than hurting it. They certainly help the U.S. Federal Government, as the world’s biggest borrower. The amount of treasury bills issued at a 0% interest rate recently reached a cumulative $1 trillion. Although declining interest rates adjust the return on lending in favor of the borrower and at the expense of the lender, a lower cost of capital stimulates more borrowing for more investment and consequently boosts demand. However, the intoxicating nectar of ultra-low rates is gradually losing its potency, and while it’s overstating the case to say that markets would cheer higher rates, certain sectors would and the confirmation of an economy robust enough to prosper without “extraordinary accommodation” as the Fed puts it would be novel to say the least.

It’s a problem facing millions of investors. The timing of a normalization of interest rates, which is to say an increase, is both closely watched and yet seemingly never closer. If you look hard enough you can always find a reason to delay a hike, and the Yellen Federal Open Market Committee (FOMC) looks everywhere. Recent speeches by two FOMC members suggest a December decision to hike may not receive unanimous support. The FOMC’s long run rate forecasts continue to drop, as shown in this chart (source: FOMC). 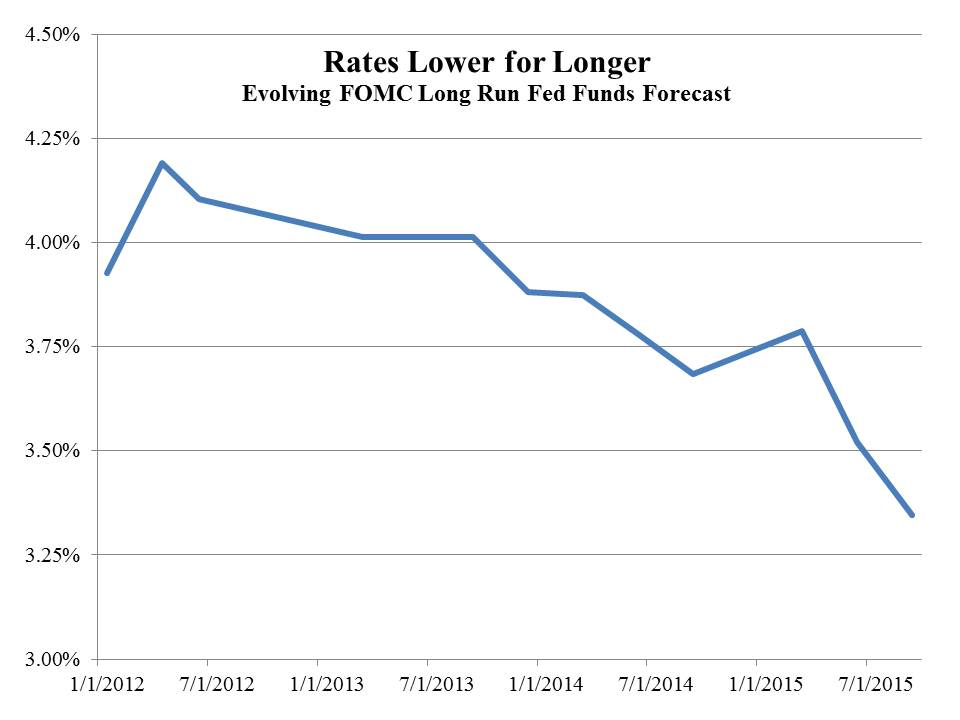 Income seeking investors are unlikely to find much solace in the bond market. As I wrote in Bonds Are Not Forever, when rates are punitively low, discerning investors take their money elsewhere.

Suppose you could buy equity in a hedge fund manager, a fanciful suggestion because they’re virtually all privately held. But suppose just for a moment that such a security existed. The question is, how should you value this investment? What multiple of fees to the manager would you be willing to pay or in other words what yield would entice you into this investment?

The hedge fund manager in this example is publicly traded NuStar GP Holdings, LLC (symblol: NSH), the General Partner (GP) for NuStar Energy, LP (symbol: NS). NSH, by virtue of being the GP of NS and receiving Incentive Distribution Rights (IDRs) equal to roughly 25% of NS’s incremental free cash flow, is compensated like a hedge fund manager. NS, a midstream MLP,  is like a hedge fund, albeit the good kind with far more reliable prospects and greater visibility than the more prosaic kind, whose returns have generally remained poor since I predicted as much in The Hedge Fund Mirage four years ago. To return to our question: at what yield would you buy this hedge fund manager’s “fees”, given its option to increase the size of its hedge fund, the hedge fund’s respectable and growing return, the permanence of its capital and the perpetual nature of its substantial claim to the hedge fund’s free cash flow? NSH currently yields 7.6% which should increase ~10% annually over the next several years based on the company’s capex guidance at NS.

We are invested in NSH.